Creating a new project from a template 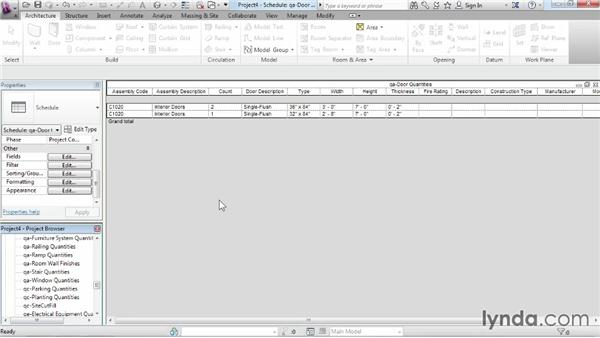 All the work you do in Revit is contained in a single Revit project file. There's a few different ways that we can create new projects in Revit. We can use the recent files screen or the application menu. Both of these which we've looked at in a previous movie. So I want to focus just on the new file creation areas. Here we've got New or the architectural and construction template. Or under the big R, the Application menu, we can go to New and then Project. Now, there's not a whole lot of difference between which way you choose it, if I choose New Project here, it brings up a dialog, New Project, and it lists out for me those same two templates that we saw listed here.

And if I click this new link, I get the same dialog. So it's really the same command either way. The difference would be if you're already in a project, then you wouldn't see the recent files screen, so you'd want to use the application menu. Now, the differences between the architectural template and construction template are something that I want to look at here in this movie. So if I choose the architectural template and I click OK. And I could have gotten there with that shortcut. I get a really basic starting point. If we look at the Project Browser, we get a level one and level two floor plan.

We've can fit a couple ceiling plans, and a few elevations. There are no sheets, there are no schedules. It's a really, really basic project. It's sort of like a no frills, just get me into the program sort of project. But there are lots and lots of settings, or lots of things that can be preconfigured in a project template. And I'm going to just show you a couple examples by closing this, not going to save it, and opening up some of the other templates to take a look. And I'll start with this construction template right here just as a point of contrast.

When I open that, the screen here looks pretty much the same. But if you look at the Project Browser, you can see that there are some differences. Instead of just having level one and level two floor plan, I now have some additional floor plans showing in the list. Under 3D views, I have several additional views showing in the list. And if I scroll even further down, I have some schedules, quite a few actually. And I have some sheets already. Now let me show you how some of this works. All of those views don't really tell us very much unless there's something to view.

Or perhaps, this door quantity schedule. What you see here is, that there is a single line item listed here. But it says the count is three. So it's recognizing that I actually have three different doors on that list. Now, if I go back to level one, and I select one of these doors, and change it to something else, gets a little smaller. Scroll down, open up that same one. You'll see I now get two different line items.

So, this was the construction template. And if you look at the names of these schedules, they all start with either Q-A, or Q-C for Quantities or Quality Control. So the kinds of things that a contractor might be interested in is, counting stuff or verifying that everything is the way it should be. But they're certainly interested in the quantities that would be in the model so that they could order the correct materials and make sure everything gets to the site. So you can see that all these schedules are preconfigured to list out that kind of information, so that they just simply start drawing, and these lists are already populating themselves automatically.

So this is one of the really powerful benefits of starting with a template. I'm going to close this one and I'm not going to save it. And there are a few other templates that are provided, and I want to just to show you what a couple of those look like. And to do that, I'm going to click the New link here. And go to Browse this time. Construction and Default are listed here. Default is actually what they're calling the architectural template. That was that really simple one that had very little in it. And construction is the one that we just looked that.

But there's also a commercial and a residential default listed here as well. Now we're going to begin a project here in the coming movies and we're going to start it with the commercial default. And let me just show you what that template looks like. So I'm going to choose it right there, click OK, and take a look. We've got some different floor plans, elevations, simpler schedules this time. You know, just a basic door schedule, basic room schedule. But this one's got a whole bunch of sheets already in here, so here's what I'm going to do, I'm going to add a wall.

The ones we just looked at, are this one, number one on A4, and this one, number two on A4. Revit automatically inputs the drawing number and the drawing reference directly in the symbols for us. And when you start in one of these templates that's already preconfigured this way, you can basically just start drawing your model in the correct location. And you're already getting schedules that are populating themselves like the one we saw a moment ago in the construction template, or sheets that are showing appropriate views already.

There's a lot of things that can be pre-built and put into the template to get you started. Now there's a lot of stuff that you can't put in the template automatically as well. So in the next few movies, we're going to be looking at some of the early project setup things that we would want to do like setting up levels and setting up grids and so forth. So your template can only take you so far. But it's a great place to get started. And you are highly recommended to always start your Revit projects with an appropriate template. Now many of you may actually be in a firm that has their own custom template.

So rather than choosing from one of the ones I've just shown you here, which are really just examples, you might be using one that comes from your office standards that somebody there in your firm has created. Regardless of the template you start with though, all projects should really be begun with an appropriate template.

6/4/2014
Build your Revit skills from the ground up. In this course, Paul F. Aubin teaches you the core building information modeling (BIM) techniques you need to complete solid architectural projects in Revit 2015. First, get comfortable with the Revit environment, and learn to set up a project and add the grids, levels, and dimensions that will anchor your design. Then get to modeling: adding walls, doors, and windows; creating and mirroring groups; linking to external assets and DWG files; and working with floors, roofs, and ceilings. Paul also shows advanced techniques for modeling stairs, complex walls, and partially obscured building elements, as well as adding rooms and solid geometry. Finally, discover how to annotate your drawing so all the components are perfectly understood, and learn how to output sheets to DWF, PDF, or AutoCAD.
Topics include:

Q: Which versions of Revit should I use with this course?

Q: Which content in this course is different or not relevant for Revit LT?

Video: Creating a new project from a template