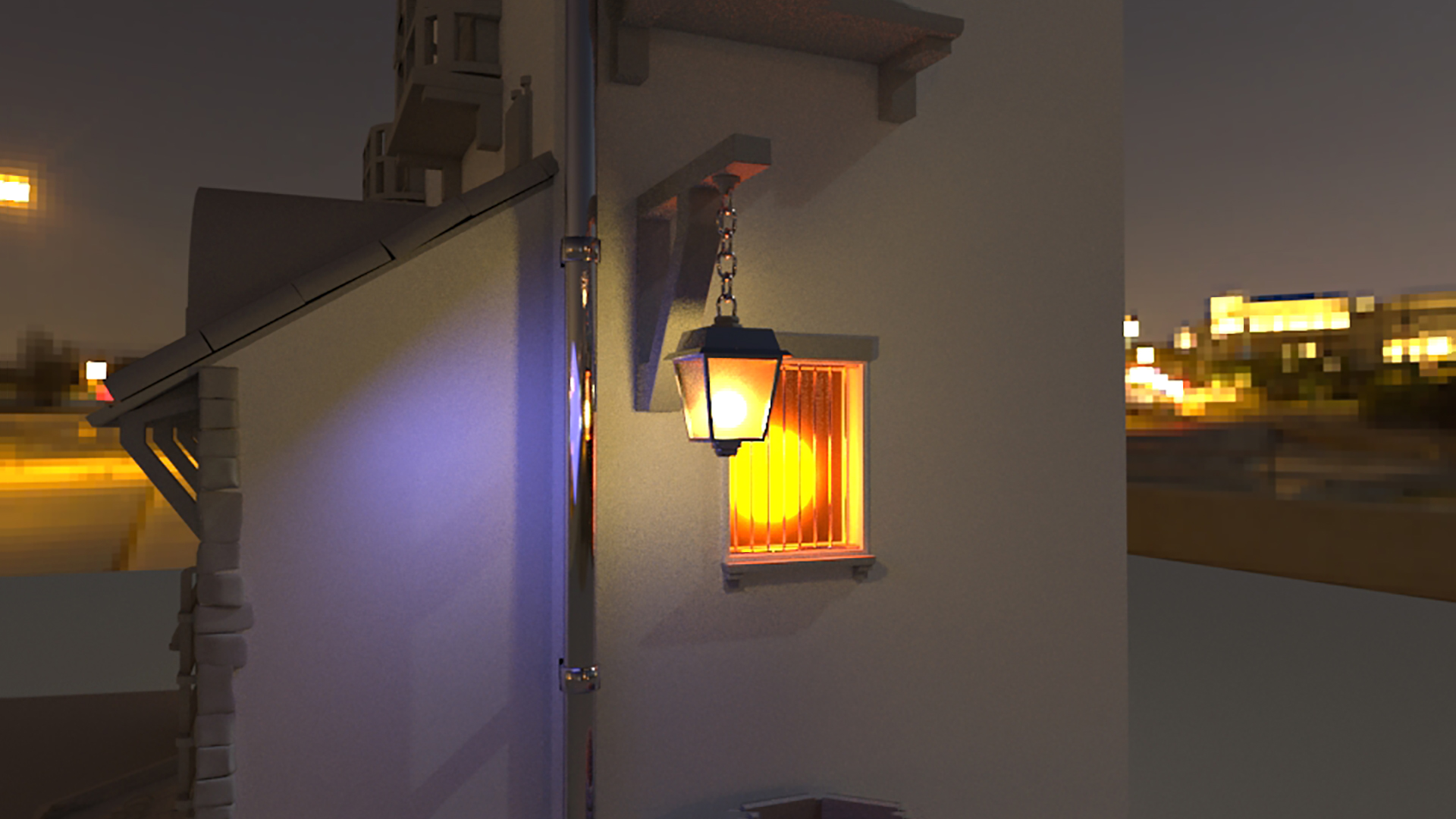 - Let's jump back into our old house scene, where we developed that emissive area light and the glass shading, that was really cool. And let's take a look at a little bit more details of area lights. So what I've done in this scene is you can see right here in the middle, I've got a nice area light placed sort of right in front of the camera, kind of pointing at that house. And if we select that, I've just made that color a little bit of a desaturated blue. I haven't touched anything else, and I've also unchecked normalize and we talked about that, so it has a more realistic energy response when we make it bigger or smaller.

Now let's put primary visibility on. That means we can actually see our area light in the render. Now in this case, we probably won't see it because it's facing away from us, but we'll look at a few different types of area lights and we'll see those in the primary visibility of the render. So before jumping in, let's just take a quick render. I'm going to do an IPR render, and here we have our path trace integrator and we've left those glass at thin.

So now we can see just roughly what we're getting here. We've also added some metals to the scene, so I just added an LMMetal to that piping here just so we can see a nice reflection. And I've added it around the light and the bars here. And we've also put glass on that window there. So that's just a quick rough render of our nice blue area light. And why don't we make it a little bit more interesting with the lighting and instead of having this glass very see-through, let's give it a little frosted look? So I'm going to go under hypershade window browser and bring up our LMGlass and then do select objects with material just to remind ourselves that it's got it on the glass of the lantern, as well as the window there.

And if we go into LMGlass and set on thin, let's take that roughness up to about .2. That'll frost the glass. What do you think that's going to do with the lighting? We'll take a look. Now when we do our next render, we're going to stop that IPR, let's switch around the different types of area light that we can do. So I'm going to just get rid of this browser. I'm going to go back to our area light and I wanted to point out that shape. So we've always used rectangular area lights. As expected, it's a rectangle, but if you bring that up, there's a lot of different ones in here.

Disk, let's just click on it and see what happens in the viewport. It gets a totally different shape. So that's going to affect your lighting. So now, instead of rectangle, that's kind of a 2D spherical disk sphere. So this is a full three-dimensional sphere, and it's going to give off light in all different directions and we have a cylinder that's interesting and then a distant light. Now this distant light, it doesn't really matter where you place it, it's just going to have an overall kind of like a skylight. It's going to be directional, so that's your classic sort of distant light, if you want some nice ambient light coming from a certain angle.

And then spot, so you can sort of change that cone. So it's like your classic spot if you really want to focus it. So definitely play around with all those different ones. We're not going to look at every single one, but I did want to point out the sphere. We've already rendered the rectangle, so there it is there. Quite a rough render. We're going to take a look at the final renders just to compare them because it's going to be quite subtle, but let's just go into sphere. Remember that primary visibility is on. We didn't really see the rectangle because it's pointing away from us.

Notice how once we change the frostyness of the glass, now it's got a nice, frosty look? Let's kick off a render and we should be seeing the primary visibility of that light. I'm going to just stop and start it again. Yeah, we're not seeing it in here, but when we've saved off a pre-render, sometimes it's a little buggy. It may or may not show it, but let's take a look at what it should look like when we do a final quality render. So here's the sphere. So actually, the render is the same but we're actually seeing that sphere in there.

Now you may be asking what is the difference between a spherical area light like we have here, and remember that emissive geo that we made in here? We took a geometry sphere and we made it into emissive by pressing this make mesh light or make emissive geometry up here in the RenderMan shelf. So what is the difference? They're both lights, they're both spherical, and that's a very good question. And they are very similar if you're just doing spheres. Like, we kind of used the sphere area light in here.

We wanted to demonstrate emissive, but would've gotten us a pretty similar look, as we'll see a little bit later. However, if you're doing more complex lighting like imagine you had a neon sign on the side of this building and you had some complex tubing, et cetera, well, you can't take an area light and make it into any kind of light source that you need. So in that case, you definitely want to use a mesh light. But if you have simple lights, like just spheres, you can just as easily go over to your area light, make it into a sphere and then have that sort of as an emissive because that's what emissive geometry is, it's a light source.

It's giving light in a certain direction. So that makes sense. Knowing that, we'd look at our cylinder and decide that's giving off light. And look at this cool sort of shadowing it's doing behind there. So yes, we have pre-saved it for you with a higher quality render, and just take a look at that nice shadowing it's doing, and there's a cylinder. So if we compare that with a sphere and the area light, we just get those cool different shapes. And as you can see, for different kind of scenes, you can get really creative with your area lights. It's just so cool that they have a shape and of course, if you make these bigger and smaller, it's going to significantly affect the lighting in your scene.

So as a little bonus, we've taken the sphere area light and we've put one inside behind the glass here in the window. Let's take a look at what that looks like. Look at that, isn't that beautiful? Nice little red light. I like how you can see, if you compare it with this one, so we'll just kind of go back and forth and all we're doing is adding that light on the inside, you can see through the glass. You can see this is emissive. You can see through the glass again, and there's another glass there. So we're getting some really cool little lights going through glass and emissive.

So in this particular render, we've got how many different light sources going on? We've got our environment light. That's our cool, night, full moon HDR. It's giving us a nice ambient look, but also doing pretty cool shadowing. We have our emissive light, that second kind of light. Also called a geometric mesh light. So we took a sphere and we converted it into a light, and it's going through glass and it made that glass really frosty so that it kind of looks a little more realistic too. Then we have an area light, just a regular area light casting down here, nice little blue.

And then finally, we have also an area light but we made it into a sphere. We put it inside behind the glass. These bars are metal. And we have all these different lights. These are all different kinds of light going on in the scene at the same time. So it's pretty cool and you don't need that many lights. I mean, we only have four here, and it looks pretty realistic. You don't need to set up a ton of bounces and bounce cards because these are all physical plausible, and they all have a shape and a size and they have this really nice fall off and soft shadowing. So that's a more detailed tour of area lights.

So go ahead and play with all the different types of lights that we've used in this course, as well as a different kind of shapes of those area lights. 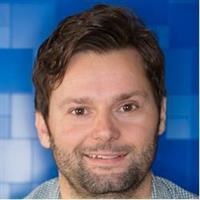 1/19/2016
Ever wondered how Pixar makes all their animated feature films and how most studios around the world do their visual effects? Meet RenderMan. Created by Pixar, and available for the first time ever for noncommercial use, RenderMan is the high-end 3D rendering package that can be used for any 3D rendering projects: animation and visual effects, but also architecture, visualizations, and commercial work. This introduction teaches the basics of using RenderMan with Autodesk Maya, including features such as arbitrary output variables (AOVs), the path tracer, and integrators. It dives into all the lights offered in the software (area lights, mesh lights, etc.), as well as the main shading networks (PxrDisney and LM-layered materials) and beginner-intermediate rendering settings in RenderMan's new RIS path-tracing rendering engine. Shading architect Christos Obretenov also demonstrates techniques for creating realistic glass surfaces and still life scenes, so you can see what possibilities RenderMan offers straight out of the box.
Topics include: