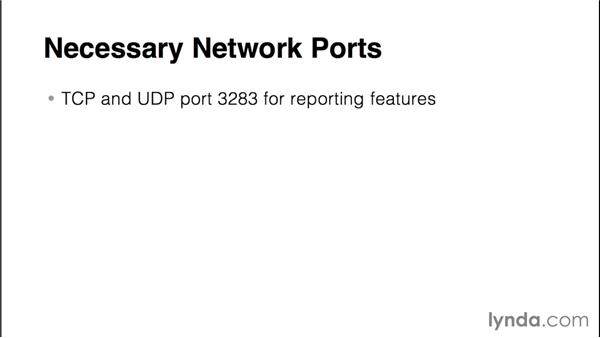 If you're jumping into this course, you probably already have some idea of what Apple Remote Desktop is capable of doing, but I wanted to take a few moments to just walk you through some basic things here. First of all what is remote administration? Well, it's when you can control or monitor, even interact with, other computers across the network that you're currently not sitting in front of. This is a great tool and most people that aren't aware that this exists are very surprised whenever they first see this working across a network.

The amount of power you have over those remote computers is limited by your ability to issue terminal commands and really your command of this software. So, that's why it's so helpful to learn Apple Remote Desktop. So, what are the components? Well, you'll need a Apple Remote Desktop Admin system. That's likely the computer you're sitting at right now. You're likely gong to need Apple Remote Administration enabled on all client systems before you get started. However, you can go around and start turning this on after you get started with this course.

You just have to remember that you will not be able to remotely administer systems that do not have Remote Management turned on in the Sharing system preference, on the remote client. Sometimes, we'll even install an Apple Remote Desktop Admin system that runs on a network that isn't the network we're administering from. But is instead, the network where all of the client computers are, that we want to manage. So, for example, if I have two different offices and I'm in control of the computers at both of those offices, but I am located at one primarily, I can still admin the computers on the other network efficiently, if I install a computer on that other network, I put Apple Remote Desktop Administration software there, and I make it into a task server.

Then, my administration software at my computer can talk to the task server and tell it to do things with those remote computers. We'll talk about how to do that within this class. There are a few things you need to have open on your network in order for this to work. And this is especially true if you're going to do port forwarding from your network to some other network for management purposes. You need to be certain that TCP and UDP are both open and being forwarded, for port 3283, that's for some reporting features.

TCP port 5900, that's for screen sharing. And TCP 5988, for some legacy distributed management features, and 5432 for legacy management database access. These again, are for legacy features that ran in ARD version 2. If you're running a version of the software that's that old, you can again, still follow along with this course. Just realize that some of the features we have, you won't have. So, what can you do with remote management? Well, first of all and probably most impressively to people who have never seen it before, you can monitor and control computers you're not sitting at.

You literally take control of the remote screen, and you use your mouse and your keyboard, and it's as if you're using that computer in some other location. In fact, frequently, server administrators will leave a Mac OS X server without a monitor attached to it, in order to save space or energy. And they'll leave a whole bunch of them stacked up in a server room, and they'll remotely control them with Apple Remote Desktop, using screen sharing. You can also search and copy files around on remote file systems, using a version of Spotlight that runs through Apple Remote Desktop.

You can even install software by using the Install Packages feature of Apple Remote Desktop. You can run terminal commands as well. If you're used to Unix, that may sound like a great opportunity for you. If you're not used to the terminal, or you're not used to the command line, don't worry. Apple Remote Desktop includes several template commands that I'm going to show you how to use. And in fact, this is a great way to get comfortable with just a few terminal commands right here in Remote Desktop.

It also gives you the ability to remotely interact with the users on the computers you're able to remotely administer. This is extremely useful because those remote computers may not have chat software installed on them, but you can use Apple Remote Desktop to remotely chat with those managed computers. And there's much, much more we can do. So, now that you know a little bit about what remote administration is, in the next movie we're going to take a tour of the interface and the features of Remote Desktop.

7/22/2014
Remote administration is a science akin to magic for most computer users. Apple Remote Desktop (ARD) puts the power of remote administration in your hands, offering an easy way to manage all the Mac computers on your network without ever leaving your desk. In this course, expert Sean Colins will show you how to install software on many computers at once, monitor activity, assist your users, and effortlessly gather data for all the computers in your environment. Sean also covers ARD's advantages for two types of people outside the IT department: teachers in the classroom and consultants managing client systems.
Topics include:

IT and Hardware IT Remote Desktop Mac OS X