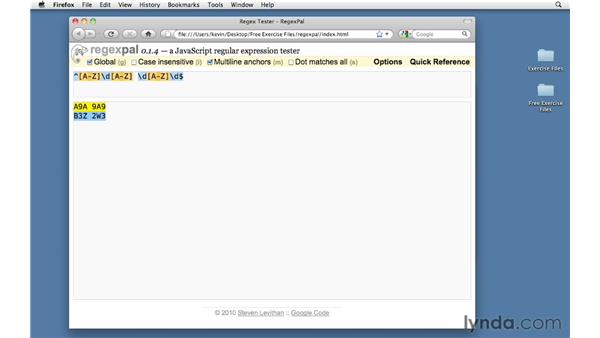 In this movie, we are going to talk about how to match postal codes, or as we call them in United States, ZIP codes. The first thing that's going to face you when you are trying to match postal codes is deciding what country you're trying to match it for, because every country sets their postal codes completely differently. Now, we could write one long regular expression and match all of those, but because there are so many countries out there, and so many different postal codes, probably the better way to do it would be to use some logic in our program that would determine first what the country was, and then based on what country it is, try to apply the proper regular expression to it.

To give you a sample of how you can approach this problem, though, I am just going to look at three different ones. I am going to look at the United States, Canada, and the United Kingdom. In the United States, the postal code format is one of two things. It's either five digits, or it's five digits, and then a dash, and then four digits after. That dash four digits is often referred to as the plus four, but it's actually a dash in between them; not a plus sign. This is a pretty easy regular expression for us to write. We need to have either 75087, or 10010-6543.

Either of those are valid ZIP codes. What we want is to match any digit that is repeated five times. And that completely matches the first one, and partially matches the second one. But here I want you to see, if we also just had a series of numbers, it also returns a match in that case. We want to make sure that we are using anchors, so that we are matching the entire thing. We are saying from start to finish that it should be only five digits. And because I've got multi-lines here -- I want these to match at the end of the lines -- so you need to use multi-line mode.

If you were just looking at a single field of data, you wouldm't need that. So now we successfully match on 75087, but we no longer have any match on our plus four one; the one that has minus 6543 at the end. Add that as well, so dash, and then the digits, and then four digits after it. Now we've successfully matched that one, but not the first one, so the way to do that is to make this one optional. Make it into a group, make that group optional, and in addition, it's also a good idea to make that a non-capturing group, unless we are actually trying to capture that data.

Now you can see that it correctly matches the five digit ZIP code, and it matches the one that has the dash and four digits at the end as well. Keep in mind the anchors, making the other part optional, and making it a non-capturing group. Let's take a look at Canada. The Canadian postal code format is going to be A9A, space, 9A9. And in each of those spots where we have an A, it can actually be any of the characters A through Z. Where we have a 9, it can be any of the characters 0 through 9.

Well, we know how to do that with character sets, right? That's pretty easy. Let's try that out. So let's go ahead and let's take this out of here, and let's say A9A 9A9. That's our pattern. That means it could be something like B3Z, space, 2W3. Those both should be properly formatted Canadian ZIP codes. So let's take everything in between these anchors out of there, and let's start by having our first character set. It's all capital letters, A to Z, and then I am going to just copy that, because I'm going to need it a few times. And then let's do backslash, D for digit, paste in our A to Z, space, backslash, D for digit, paste in our A to Z, backslash, D for digit.

That's all it is. We just use character sets to match the pattern exactly. Now, this will make sure that the postal code is formatted properly for Canada. But like the United States one, neither of these says whether it actually is a real and existing postal code or not. It just makes sure that it's properly formatted, makes sure that it looks like a postal code, but it doesn't ensure that actually once we send it off to the post office, that the post office won't say, sorry, that postal code doesn't exist. We could try and write something that would limit those.

However, I think that there are so many of these combinations that are in use, and that they're constantly changing -- there's new ones being added all the time -- that it may not make sense to try and limit it too much. Unless you want to take on the constant maintenance of this regular expression to make sure that it stays up to date with current postal codes, then your regular expression could easily slip out of date. It's much better to just match the general format, make sure that it matches what seems like a correct postal code, and then let the post office decide whether it's actually deliverable or not.

As our final example, let's try the U.K. The United Kingdom postal code formats come in a number of flavors. We can have A9 9AA, where A and 9 represent the same things we just saw for Canada; any capital letter or any digit. Or they can be formatted A99 9AA, AA9 9AA, AA99 9AA, or A9A 9AA, and lastly AA9A 9AA.

So what we need to do is try and make some kind of sense out of these patterns, so that we can write a regular expression that will encompass them, because there is lots of different possibilities. If you start looking this, you will notice that all of them end in space 9AA. So that's great. We can just reuse that for each of those parts. So then all we have to do is figure out a way to describe what's in those first two parts. Well, if you'll notice, it always starts off with either one or two letters, followed by either one or two digits, and then just for the last two lines, there is the possibility that there is another A that comes at the end.

We wrote something that would match all of these expressions. However, in the process, if you check our logic very carefully, there is a problem. We allowed the possibility that this format works as well: AA99A 9AA. See? We got a match. But that is not a valid example. It's not possible to have two letters, followed by two digits, and have the optional A. If the optional A is there, the only ones that are valid have a single digit. So one way that we can fix this is by using alternation.

So let's take this expression here, and let's just copy it to start with, and let's put parentheses around it, and now let's use our alternator, and I'm just going to going to paste the same expression a second time. It's a duplicate at the moment. What I want to do is say, alright; the first case is when we don't have A to Z at all, so I will take that out. So that will match all those possibilities, except these last three lines here, if we include our one that shouldn't work; the one that should fail. And in the second case, I am going to take out the fact that it's optional. So now I am saying essentially the same thing that I had before.

Either it has the A to Z at the end, or it doesn't have the A to Z at the end. Well, in the case when the A to Z is at the end, no longer are we going to have one to two. Instead, we are only allowed to have one now. So now the edge case that shouldn't work no longer works. Just like with the U.S. and Canada, this allows for a lot of combinations of letters and numbers that don't actually exist as postal codes. What if we did want to restrict this to actual working postal codes? Well, we could check it against a postal code database, or we can narrow our regular expression.

It turns out that Wikipedia lists a regular expression that will do exactly that. And I am pretty sure that this regular expression, or a version of it, was created and put out by the U.K. postal service. So this is an example where we could try and narrow it down, because we actually have an authoritative regex that's been provided to us by the postal service. And as that updates, we can just update it with their new regular expression. As long as they continue to publish it, we can go ahead and use it. This is what it looks like for the U.K. It may get updated since I have posted this, but this will ensure that we actually only find postal codes that really do match.

I had to wrap this regular expression between two lines to get it to fit. There is no space between the end of the first line, and the beginning of the second line. Those two square brackets sit back to back. So I think it's pretty cool that a government agency understands the power and the usefulness of making a regular expression like this available to the public. I wish a lot more governments would do this.