The differences between the T4i and the T5i 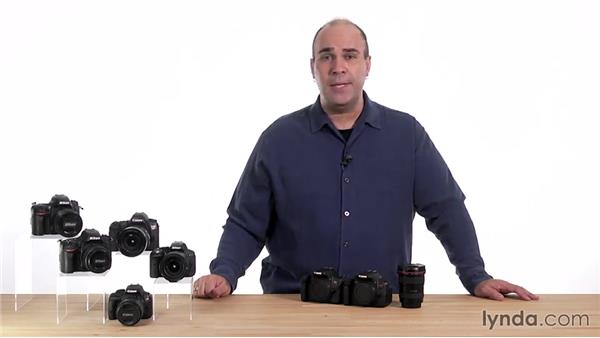 - Before we dig into all the great things you can do with the T4i and T5i, I just want to talk a little bit about the differences between the two cameras. Now, it was less than a year between the release of the T4i and the T5i so, not much has actually changed. In fact, many folks were surprised at how quickly the T5i came out. But, one of the things to realize, is that there are a few changes between these, although most of them are pretty subtle. The camera has really gone through not many changes on the inside, it's very similar. All the specs, the shooting rate, all of those really stay the same.

Now, even though both cameras have a very similar LCD, the one on the T5i has a very slight change to the structure coding. This really makes the screen nice and big, but not as prone to damage. It really seems like this was a change made to make it a bit more durable. Plus, you can also do more things on the screen like change its aspect ratio from 3.2 to other modes, such as 1:1, 16:9 and 4x3. Secondly, the live view on the T5i is a bit stronger.

It'll actually play back at 60 frames per second, versus 30 frames per second in the T4i. This makes the image look a bit crisper, because it's a higher frame rate, and you're less likely to see flickering or strobing, particularly when dealing with fast-moving subjects. It's also now possible to see the creative effects applied, so if you're using picture styles, those will show up on the live view. So you want to see what it looks like in monochromatic video, or you want to take a look at the landscape preset, you'll actually see that represented on the live-view display, not just after you take the picture.

While it's not a real big thing, if you're changing modes, the mirror on the T5i doesn't need to drop in between modes. This means it's easier to quickly switch between modes, and the camera doesn't make as much noise. Something that seems more aesthetic is the outer coating. The T5i is a lot more like the Canon 60D. The T4i can be a bit slick in the hands, while the T5i has a bit of a matted finish with the texture. This makes it a little bit easier to hold the camera, and will cut down on accidentally dropping the camera.

Another thing that's been tweaked has been the dials. On the T4i, the dial doesn't rotate all the way around. So, if I want to go from the different modes, I have to turn that. Want to go back to a scene mode? I've got to turn it all the way back. On the other hand, it's very easy on the T5i to quickly turn this dial a full 360 degrees, which makes it easier to get to certain settings. Now, a couple of other changes that were tweaked inside the camera with the software. The T5i does have the ability to use a digital zoom.

I don't recommend this feature very much, but if you need a little extra reach, you can pull it off that way. The camera also has a Scene Mode setting, which means when you choose it, the dial is a bit less cluttered. On the T4i, those scene modes really get jammed up at the end, but now you could just choose Scene Mode, to access some of the modes, such as Night or HDR modes. Also, while it's not a change to the camera, Canon did see to improve the kit lens that ships with the T5i. The aperture is faster, and it has a better motor for smoother focus.

Now, between the two cameras, not a significant difference. As we're going through the menus and all the basic settings, whether you're shooting on a T5i or a T4i, you will have no problem following along in this class. But, if you're out there shopping, the T5i, mainly for that improved lens, as well as just the way it feels in the hand, is a nice upgrade, and I do find the mode dial a bit easier to work with.

10/27/2014
Get up to speed quickly with the essential features and controls of the Canon T4i and T5i—two great DSLR cameras that bundle popular features and powerful controls in smaller and more affordable packages. Explore the shooting modes that go beyond "auto"; find out how to take bracketed photos and videos; and learn to adjust camera settings, like ISO, for specific situations, such as mixed lighting, fast movement, and low lighting levels. If you understand your gear, you can get consistently better photos, so keep your camera close by, as Rich explores its many features and controls.

Want to get up and running even faster? Check out the "Quick Start" chapter to learn how to use your T4i or T5i straight out of the box.
Topics include:

Video: The differences between the T4i and the T5i