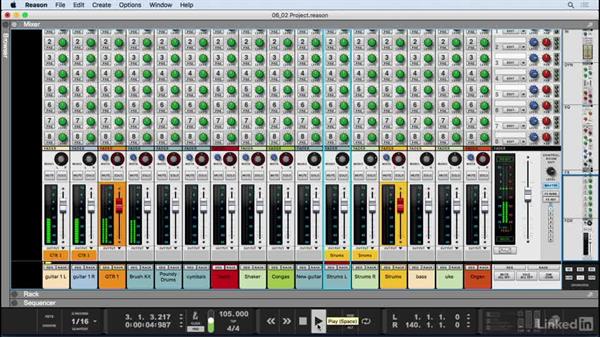 Once all the audio tracks have been recorded and the virtual instrument parts have been created, mixing is the next important step in creating your song. Mixing is where each element of a musical recording can find balance with the rest of the mix, and where each track will find its distinct place. Matt Piper, audio engineer and music producer, shows you how to set levels for each instrument in a mix, and how to set the placement in the stereo image using the Pan controls on individual mixer channels in Reason 9.

- [Voiceover] I've got an instrumental track here…that's ready to be mixed.…And right now I'm in the sequence review.…And you may be noticing that this looks a little different…than other projects we've seen…and looked at in the sequence review.…That's because I built this arrangement using blocks.…Which is a method of sort of loop based arrangement.…So if I go to the blocks view, you can see that I have…several different named blocks here.…

And I'll let you hear one of them.…This is uke and guitar.…(upbeat guitar and ukulele music)…So if I go back to the song view,…you can see up here if I zoom in,…this is where I've drawn in these blocks.…And you can see the drop down…where I choose which block it is.…And those blocks are mixed with other nonblock things,…like this Dr. Octo Rex here.…So if you're interested in loop based arrangement,…you might want to dig into blocks.… 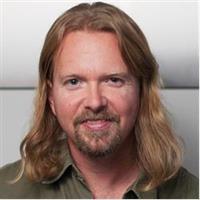 7/22/2016
Learn the basics of Reason 9, the professional-grade DAW, from setup and recording to mixing and mastering. Matt Piper shows how to configure the preferences, use the file browser, and get comfortable with the various windows and views. Next, he moves into recording music, showing how to record audio and software instrument tracks, create beats, sample audio, use REX loops, and record automation. Then it's time for editing, using tools such as quantization, pitch correction, time stretching, tempo and time signature automation, and the Comp Editor. Matt also demos mixing techniques, such as setting panning and volume levels; using EQ, compression, gates and sidechain compression; setting up effects sends; and creating parallel channels for compression. Finally, he demonstrates how to use the mastering tools in Reason, as well as how to prep a mix to give to a mastering engineer and how to export stems for collaborative purposes.
Topics include:

A: New videos were added that cover what’s new in Reason 9.5.x, including using VST plugins in Reason, MIDI drag and drop, and delay compensation.