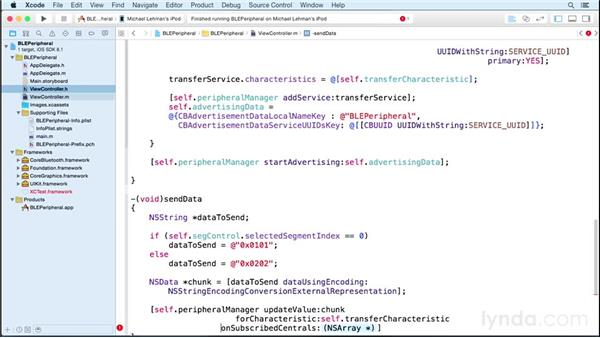 Join Michael Lehman for an in-depth discussion in this video Updating a characteristic, part of Programming the Internet of Things with iOS.

- All right, let's go ahead and verify…that what we've got so far works.…First, we'll come over here and we'll look at…our iPod Touch, all right.…So there's our app running on the iPod Touch.…Let's go ahead and switch back over to the iPhone.…All right, so here we can see we've got our…iPhone ready to receive the data from our iPod Touch.…We'll click start and then we'll click…tap advertising over here on the iPod Touch…and you can see that we found, as we did before,…our BLE Peripheral and it has all of it's services…and characteristics including the one…that we want here, FFF3,…which is our characteristic UUID for the data.…

All right, now let's go ahead and implement…the code that actually can send some data…for that particular characteristic.…So we'll come back here to Xcode…and we will go ahead and implement these other pieces.…So first of all, come down here.…Let's implement send data…because that's gonna be called…by a number of different things…and so we're gonna say NSString dataToSend…then we're gonna check the state of our…

11/13/2014
The "Internet of Things" is a catchy way of describing the variety of devices connected through the Internet. This includes webcams, wearable tech-like smartwatches, car sensors, appliances, and even rudimentary robots. What the Internet of Things (IoT) offers is a way to manipulate the real world—the physical world—from the web. In this course, Michael Lehman shows how to program these "things" and build companion apps to monitor and record their activities from iOS devices. Learn what's inside a thing, how location-awareness technologies such as iBeacon connect the IoT in public spaces, and how you can create your own things with hardware like the Arduino and Raspberry Pi kits. Michael also shows how to use IFTTT services to control things on iOS, and muses on the future of IoT. Along the way, you'll gain experience with real-world IOT-driven projects, like a mini weather station and a home lighting system.
Topics include: