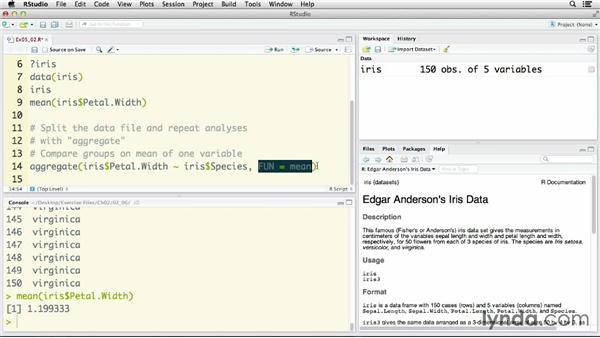 In the previous movie, we looked at how you can select cases to drill down and analyze your data by specific groups. In this video, we're going to look at how you can go from one group to another and compare the results in your own analyses. We're going to start by loading a data set that comes in r, it's called Iris. This is actually a well-known data set in the statistical world. It consists of measurements on several different species of irises. I'm going to load the data into the workspace. We have 150 observations of five variables.

And then let's actually take a look at what they're like. We see here, that we've got measurements on sepal length and width, petal length and width. And then, the species of the iris. Let's take a look at the mean petal width. Now, this is across all of the observations of all of the species. It's 1.199. Now, let's split the data file and repeat this analysis for each species using the aggregate command.

So we're going to use aggregate right here. Then I'm telling that I want to look at the petal width. That's my outcome variable. That's the one that I want the mean of. And then the tilde here means sort of as a function of. In this case it's going to be a function of the species variable in the iris data set. And then this last thing here at the end is I tell it exactly what it is, and I want to aggregate, and FUN stands for function here. And we're looking at the mean. So I want the mean of petal width for each of the species groups.

And then we'll run that one. And now you see that while the overall mean is 1.199, they differ dramatically from one species to another, going from 0.246 up to 2.026. So, there's substantial difference between the species, even though they're all irises. Now, let's say I want to look at several variables at once. What I can do here, is I can use the function cbind. That's for column bind. It's a way of combining the columns from several objects.

I'm still using aggregate. Except, now I'm using cbind to indicate that there are two outcome variables. I'm going to use petal width and petal length. And they are both done as a function of, that's the tilde, of iris species and the function that I want to see is the mean. So I'm going to run that one and now you see that I've got two variables. Now, it's labeling them as V1 and V2, variable one and variable two. So I need to remember the order that I asked them.

The first one is petal width. That's what I've got right here. The second one is petal length. And, here I look at the three species and you see, for instance, that the virginica is huge compared to the excetosa. And, that's a good way also, of being able to distinguish the species by measurements only. Which is why this particular data set shows up a lot in classification problems. Anyhow, that's the very basic principle we use to aggregate in order to split it up and to see the results of all of the groups at once. And you can do it for either variable at a time or by using cbind to get multiple variables at once.