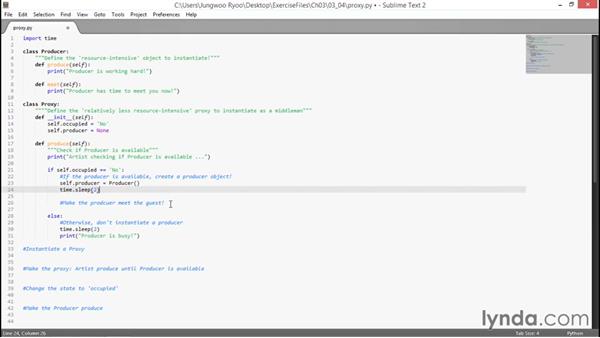 - Let's first define this Producer class, which is supposed to be more resource intensive when we're trying to instantiate it. So the Producer class simply print some of these messages. There are two methods defined. The first one is printing the current status of the Producer stating ('Producer is working hard!') and then the second method is simply printing a statement saying that Producer has time to now meet a guest.

So we have this if statement that says self.occupied == 'No', so if the Producer is not occupied, that is available, then that's when we'll be instantiating this expensive Producer class. So we simply say, self.producer assignment and then we are creating an object from the Producer class. And then we let the program wait a little bit, by stating time.sleep for (2) seconds.

So the end result will be the Producer being able to spend some time with the guest. So let's run the code, see if it works. Go to Tools. Click on Build. And as you can see the Producer is now available. Moving on to the next steps. Now let's try to change the state of the Producer occupied. p.occupied. And we'll set it to 'Yes'. And then we'll make the Proxy produce again.

And let's run the program again. Build. And now you see this message. Producer is busy! Remember the point of having this Proxy, because the Producer object is so expensive to create that's why we have this Proxy object handling the requests from the guests until the Producer object becomes available. So here, what I mean by expensive, is really being resource intensive.

So in this case, Producers are much more resource intensive to instantiate.