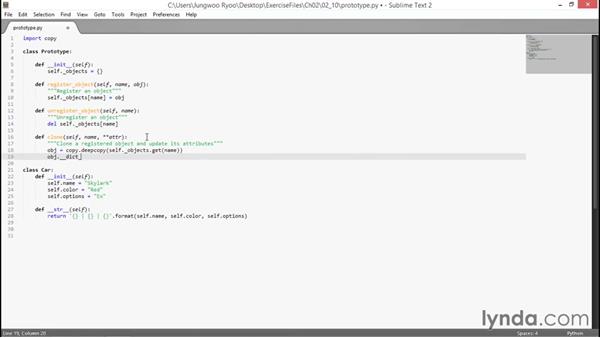 So, type self_objects. This is our dictionary. And then the key will be name, and, using the key, we'll be storing the object to be cloned. Next is the unregister object method. In this method, we'll be deleting the objects from the dictionary object. So, simply delete by using dl, and then self_object, and we want to delete a particular object using the key, in this case name.

Let's move on to the final method, which is clone, which is probably the most important method. So, this method is used to clone the prototypical object. So, first copy the object, so type obj. This is where the copied object, or cloned object, will be stored, and we copy it by using the deep copy method. So, the prototypical object is already stored in our dictionary object, so we're simply using it by saying self._objects, and then we need to get the object by using the key, name.

Just say return obj, so now the definition of your prototype class is done. So, then moving onto the prototypical object we'll be cloning, in this case we'll be cloning this Car object. So, we have to define the class for the Car objects we'll be cloning, and we initialize each Car object using these attributes. For example, the name will be Skylark, the color will be red, and then the option we're using is Ex.

And then we'll have to register that prototypical class, which is housed, now, in the C variable. So we'll just say prototype.register_object, and the key for the object is Skylark, and then the prototypical object is passed in the second argument, which is c, and then let's see if you can clone that object.

So, we'll put it in the variable c1, and we will clone it. So type prototype, lowercase, and then cull the clone method, and, in this case, what we want to clone is the one associated with the Skylark key, so that's why I used Skylark here, so now we just cloned that prototypical object. Time to print it.

So, just say print(c1). Let's build the program and see what happens. Go to Tools, click on Build, and it worked. As you can see, it's printing all the attributes of the cloned object.