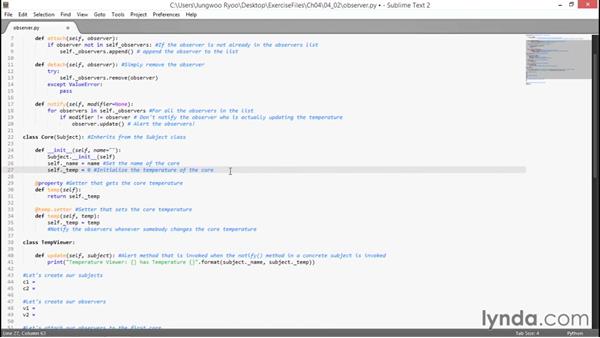 - So we start with the Subject class which represents what is being observed. So the Subject class keeps this list called _observes which is where references to all the observers are being kept. So note that this is a one to many relationship. There'll be only one subject who will be observed by multiple observers. Next is defining the attach method and this method accepts an observer as an argument.

Now the next class is our Core class which is inheriting from the Subject class and you can see that by this keyword Subject. So by putting this Subject keyword in between the parentheses, we're indicating that we're inheriting from the Subject class. In the init method of the Core class we're setting the name attribute based on the argument in the init method and then the temperature is simply set to zero initially.

So like I said, this is an alert method that is invoked whenever the notify method in a concrete subject is invoked. So all it does is simply display this message saying that temperature viewer so and so, in this case, a particular object, has temperature value such and such based on the actual core temperature. So we're done with defining our classes. Now let's actually try to use these classes by first creating our subject.

So there are going to be two subjects: core 1 and core 2 but we'll be using the same class Core. We'll name the cores differently, Core 1 Core and then Core 2. And then it's time for us to create our observers. The class representing our observers is called TempViewer. So type TempViewer and then we need another instance of TempViewer.

TempViewer. Now let's attach these observers to our first core. So c1.attach and v1 is the first observer. And then we'll be attaching the second observer, which is v2. attach(v2). So now we are ready to test our code. One of the ways of testing our code is by changing the temperatures because that's when the observers get notified.

Let's try it again. Go to Tools, click on Build. Okay I missed another one here which is self and let's try to run it again. Build. I forgot the colon here too so let me do this and then try. Click on Tools and Build and then another colon here. Let me try again. Tools, Build. And then finally here I have also a little bit of problem.