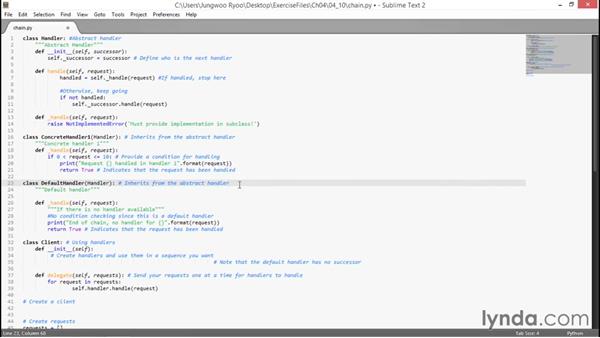 Join Jungwoo Ryoo for an in-depth discussion in this video Chain of responsibility example, part of Python: Design Patterns.

So now, let's go ahead and define our concrete handler classes. In our first concrete handler definition or concretehandler1 definition, you see this conditional statement. So, if the request is in between zero and 10, then it will print this message, "Request so-and-so handled in hander 1" and then it will return this True value to the culler of the method.

So, basically indicating the request was handled properly. The next concrete handler class is default handler class, in which we'll try to be covering the case no handler can handle the request. So, that's one of the reasons why we don't have any conditional statement in the _handle method. So, no matter what, we'll be alway printing this message, simply saying "End of chain, no handler for such-and-such," and it will always return this True value, just to make sure then handling process is over.

Finally, we have this client class, which is using the handlers. So, this is what is actually using the handler classes. In the client class, we'll be creating handlers first, and then we'll try to use them in a sequence we want. So, let's create our handler by typing concretehandler, but the concrete handler needs to specify who is its successor, that's why we will be using the default handler as a successor.

DefautHandler... And the default handler has no successor, which is why we use None here. And then we'll store the instance of the concrete handler in this variable called Handler. So that's why we type self.handler = The next part of this client class is this delegate method. And in the delegate method, all we're doing is receiving the requests, and then, based on the number of requests in this request list, we'll be iterating through this requests list, and then we'll try handle these requests one at a time.

So that's what's happening in the forelook. So, we're finally done with the definition of all the classes we need, and now we're ready to move on to actually using these classes. So, let's use them by first creating a client. So, type c = Client, and then we'll have to be providing the request in the form of a list, so we'll be using some integers as requests. We'll be using two, five, and then maybe 30.

Let's scroll down. And then, we'll be invoking this delegate method on the client object. C.delegate and then we'll have to pass the request. Now let's go ahead and run the script. Tools, Build. So, it looks like we have a little bit of typo. There is no such thing as concrete handler because our concrete handler was concretehandler1, so we'll be typing 1 there, and then try again.

And the script works fine. Now, remember that this chain of responsibility pattern is used not to tie a specific solution to a request, and I hope I demonstrated this well in the code.