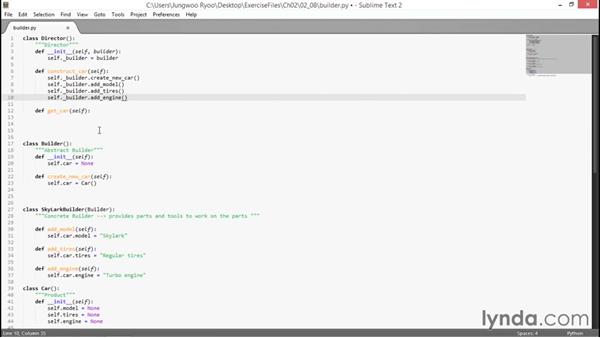 Now, the next part is to go back to the Director class and then complete the definition of construct_car method here. The Director is the one that's actually building the car. First of all, you need to create a new car object to get started. So type self._builder, so this is actually where the Concrete Builder object is stored, create_new_car.

Then we'll add the model, builder.add_model. The model name is Skylark, we'll be adding the tires text. Finally, we'll be adding the engine. So we're done with actually building the car in the Director class. Since we are now done with creating all the classes necessary to build the car object, it's time to move on and build a car using these classes.

Now we can construct the car by invoking the construct_car method so type director. construct _car. Finally, Director gets a reference to the car object by invoking the get_car method. The way we invoke it is director.get_car and whatever we're getting from this method we put it in the car variable.

Now, we are ready to print the car object. So let's print it. Let's test it, under Tools, Build. We are missing actually the method definition here so we need to actually return the object we're building, in this case the car object, so here you simply add one more method simply that returns the car object, return self., whatever is stored in the Concrete Builder, in this case builder.car, that's what you'll be returning.

Now, let's rerun the code. And it works. As you can see, the builder pattern simplifies the process of building complex objects. This is helpful especially because it makes the process of creating similar objects much, much easier and cleaner. All you have to do is simply add another Concrete Builder. For example, we could add another type of car.