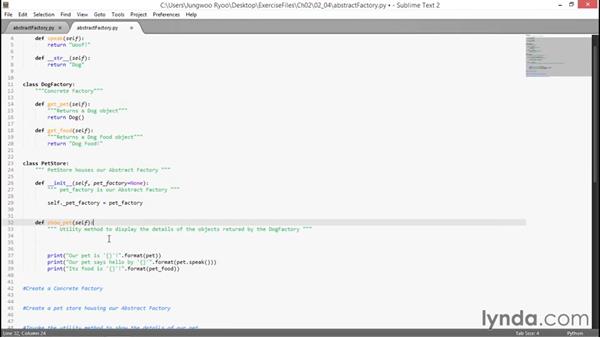 In this case, the first object we're returning is the dog object, and the second object we're returning is the dog food object, which is simply, a string object. So let's complete this code by typing return, the name of the class, dog, and then we'll be returning the dog food string object, so return, dog food. The next class is the pet store class, which will be housing our abstract factory, actually, an instance of our abstract factory.

So we'll simple name it as self._pet_factory. We'll give it a space, and then we'll assign this argument we're getting from the init method, which is pet factory, as you can see, so we'll simply say pet_factory, and that's all we need to store the instance of the concrete factory class, in this case, dog factory.

And this _pet factory attribute is our abstract factory in this case. Next is the method that simply shows all the details of the objects we're receiving from the concrete factory, so this is simply a utility method that will display all the details of the objects returned by the dog factory, which is our concrete factory. So we'll need a variable, pet, and we'll be storing, for example, the first object we're receiving, so self_pet factory, and we'll be getting our pet, which is dog.

Next, we'll also get the pet food object, so we'll say pet food assignment self_pet factory. Now we're getting pet food. So now our utility method is complete because we have all the necessary print statements here, which will be printing all the details. Now let's move on to the part where we're actually using all these classes we just defined.

So we just say shop, which is out pet store housing the abstract factory in its attribute, and we instantiate the pet store. However, in the process, we're getting the factory, which is the instance of the concrete factory, as an argument here. Then, once we have our shop object, we can invoke this utility method we just created by saying show pet, and that's all there is to it.

So let's try to run the code and see what happens. Go to Tools, click on Build, and as you can see, the code worked beautifully. In addition to this concrete factory called dog factory, if you want to add another concrete factory, such as cat factory, adding that new concrete factory is not a big problem. That's one of the reasons why we use this pattern, abstract factory.