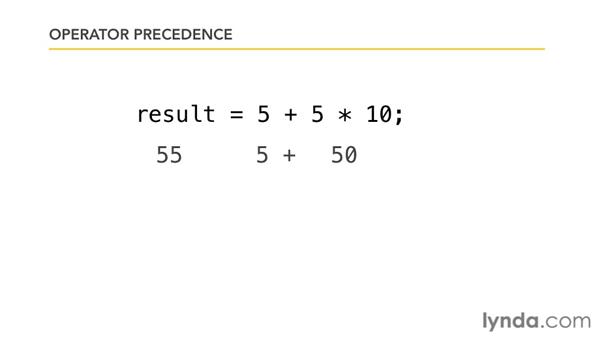 In JavaScript, operators are commands that make the code perform actions. Many of the operator symbols are easily recognizable, such as plus and minus signs. Since a program can include many types of operators, JavaScript gives some more importance than others. This online video from Lynda.com will teach you several common operator symbols and how working with operators can help you control what programs do.

So we've seen that JavaScript has words like alert and prompt that are…causing it to do things to pop up dialog boxes.…But also, it's beginning to be obvious that there are symbols like the equals sign…that are absolutely as meaningful as words are in a programming language,…because this also causes things to happen.…It can take the literal value 500, and cause it to be put in the variable called…Balance and this equals sign, this assignment operator, is one of many operators…in programming languages that will cause things to happen.…

Let's explore a few more of these operators by starting off with a few that you…already know how to use.…So the most obvious ones are the arithmetic operators.…We have operators for addition, subtraction, multiplication, and division which…we're using the asterisk for multiplication and the forward slash for division.…We're usually using this in combination with the equals sign as well.…But let's say we create a couple of variables, variable a = 100, variable b, set…