Tracing through a section of code 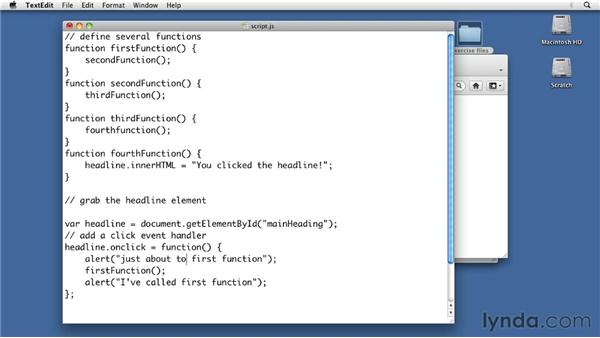 Tracing through a section of code is an effective way to troubleshoot errors in not only JavaScript, but other languages as well. In Foundations of Programming Fundamentls, you'll discover functions to debug code, as well as the tracing method for debugging that can simplify the identification and fixing of bugs.

So let me show you a simple low-tech way of debugging some JavaScript code and…this concept also works in other languages.…I am going to open up an example file of JavaScript that I have.…There are a few lines here but there's not a lot of complex stuff going on,…we've talked about every single piece here.…I am defining four functions at the top of my JavaScript.…firstFunction, secondFunction, thirdFunction and fourthFunction and they're…basically just calling each other in order.…The reason that I am doing this is I want to follow a flow.…

Video: Tracing through a section of code