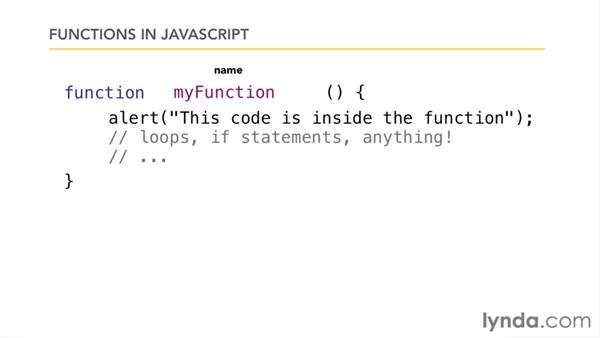 Developing application code always starts with one line, but ends with many hundreds or thousands. Subsequently-- if not well organized-- code can get messy, hard-to-read, and hard-to-follow. Simon covers the basics behind breaking your code apart in JavaScript with constructs such as functions, modules, subroutines, and more.

As we start to add more code, you'll find that your code begins to get messy. It becomes harder to read, harder to follow. So in all languages when we have large amounts of code, we break them apart into smaller, reusable, modular pieces. Now these have different names in different languages. Sometimes they are called modules, sometimes subroutines or subprograms, or just routines or methods. Now with JavaScript and with many other languages, we call these functions.

A function is simply the idea of taking a block of code whether one line, five lines, or a hundred, wrapping it up, and giving it a name so that you can call it later and you can treat this block of code as one thing. It's very common to have your functions use this verb-noun format such as calculateArea, createMessage, sendEmail, animateImage. And the way that we create them in JavaScript is that we take the code that we want to enclose, whether that's one line, ten lines, or a hundred.

We surround it with curly braces to create a code block to say where this function starts and where it ends. And whatever is inside that code block is called the body of the function. Now we need to say what this function is. We need to give it a name, so we first add the word function in JavaScript. And because we could have dozens or hundreds of them, we give it a unique name. And that part, like variables, is up to us. So it could be createMessage, hideMenu, animateImage, explodeSpaceship, calculateScore. And let's just call this one myFunction.

This causes the function body to be called and all the code inside it is executed. Now it's worth bearing in mind, we could both do this multiple times, calling that function again and again and again. But do also be aware that if you create a function, it won't be called automatically. You have to call it yourself. Now if you have one or more functions in your JavaScript file, it doesn't officially matter where you write them. You could write your functions in any order. You could call your function and then define it.

So whether they use the term functions, modules, subroutines, methods, this idea of treating a block of code as a callable unit inside a larger program is a core feature of all programming languages. It makes your programs easier to write and easier to understand. You can split work among different programmers by giving them different parts to write. Now functions can of course get more complex than basic ones shown here. They might not just perform an operation, but they might return values or they might accept data, and we'll see how to do that next.