The past, present, and future of mixing 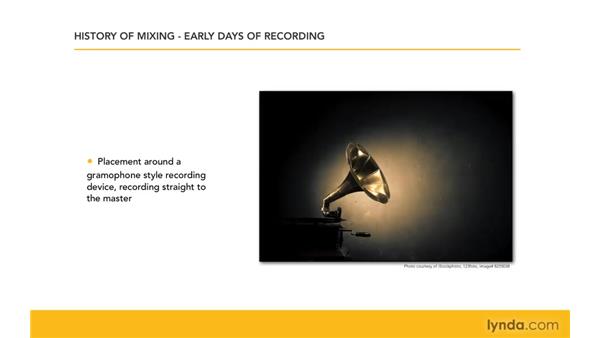 With more and more individuals making music with computers and finishing a complete musical idea from start to finish, all by themselves, the traditional steps known as mixing and mastering, once performed by men in lab coats, is now blurred into the bigger picture of music production. Well, proper mixing and mastering engineers remain a very relevant part of the professional music and postproduction process, many producers and song writers are now taking on the role of mixer, especially now as the quality and affordability of the necessary tools increases.

But it's really important to remember that it's not the gear that makes the mixer; ultimately, it is their intuition, inspiration and instincts that take a song to that next level. So I want to look at two definitions of mixing, mixing as sort of an audio signal flow concept and mixing as more of an art or an extension of the song writing or production process. Mixing as an audio signal flow concept is literally the physical summation or combination of multiple audio signals into a single output.

So taking multiple discrete tracks and adding or summing them together into a single stereo or a multi-channel output. Now, mixing as an art or an extension of the song writing or production process sort of more looks at the aesthetic goal of taking the final step in production where the mixer is attempting to effectively deliver this song to the listener and sort of extend the idea or the vision of the songwriter and producer. That's where things get a little bit more complicated, because when you think about highlighting the important components and creating a focus of where the listeners should pay attention to, and sort of the peripheral elements that support that. It's kind of if we think about the difference between photography as the physical taking a picture with the camera and photography as an art of actually capturing a moment in time, they're very similar concepts.

So historically, the theories behind mixing kind of started way before electronics and the ability to record sounds. So if we think about symphonies and composers, these people had to almost be their own mixers by understanding the instruments and the space, the concert hall. So in a sense, the conductor was sort of the mixer, balancing the instruments by ear with hand gestures and the composer had to really understand the tonal qualities and the ranges of each instrument as they were arranging, because there was no possibility of EQing that violin later.

Now, as technology progressed, we gained the ability to actually record sound, sort of with gramophone style recording devices, to wax, and what happened is generally it was a monophonic recording and all the musicians would be in the same room and they'd have to record all at the same time. So the opportunity for mixing or balancing the tracks or affecting them afterwards wasn't possible. So the band would literally have to be placed in the room how they wanted to capture the sound, so the louder, more powerful instruments in the back with the quieter instruments upfront.

Now, as we progressed into sort of the era of tape recording and the ability to multi-track things, we gained more power over the recording process and it sort of turned the recording process into more of an art, where we actually had more control after the fact of what we were doing and how we were going to balance the sounds. In through the 70s and the 80s, sort of the golden age of recording and huge half-a-million-dollar analog consoles and outboard gears and multimillion-dollar studios, the sort of craft of making, mixing and recording art really evolved.

So if we fast forward to today, we can think about people making whole records inside of laptops at a coffee shop, maybe, and this sort of began in the late 90s when gear got really good and also really cheap and software and computers became more powerful and this became more of a viable workflow for people making and producing and mixing music. So the way that the recording process and ultimately the mixing and mastering process has evolved over the years, it has done so for a variety of reasons and it's important to think about those as we approach mixing as sort of part of the entire music arrangement and production process.

So mixing has evolved a lot because of the tools we have available. Mixing has evolved to accommodate based on how we record music and produce music. Mixing has ultimately evolved to meet the demands of the listener and the styles of music, sort of like how film has evolved over time. Right now we have the ability to do amazing special effects and use those effects to tell stories like never before. So the same thing is true in recording with the tools we have available.

So traditionally, most think of mixing and mastering as the final step of the production process, sort of tying up any loose ends and really putting the song into an easily digestible package for the listener. While this definition still holds true and it's important to recognize the origins of these finite steps, much of today's mixing is being done as part of the song writing and production process. Because of today's technology, I often make decisions as early as the first day of recording that will carry on through the mix and the mastering stage.

Many times, because I think of the big picture while I work through each stage, my mix is sometimes almost 90% finished when I complete the production and arrangement process. So regardless of your approach, the ideas outlined in this course will help you take your mixes to the next level, both from a technical standpoint as well as an artistic or aesthetic one.

Video: The past, present, and future of mixing