Working with a reference track 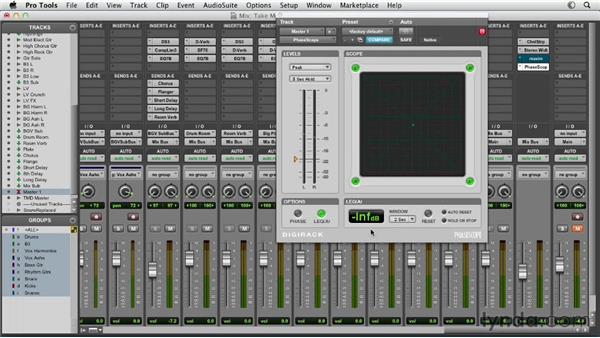 When working towards a great sounding mix, why not start with another one that you already now sounds great? A reference track provides a known quantity that helps eliminate some of the guess work when balancing, EQing, and leveling the track. What I like to do in my mixes, especially if I'm working towards a specific genre or have a client who's asked me to listen to a couple different mixes that they really like and emulate, I will bring in a reference track directly to this session that I'm mixing.

And so in this example, I'm just going to move to the Exercise Files folder and I'm going to bring in just a balance of the Take Me Down Master. Now typically, this would be a separate song, but in this case this will serve as a good example. So I'm going to drag that in and that's going to give a new track, all the way over here at the right end of my session. Now there're some considerations for pulling in an already mastered file into your session, and one of those is if you're not mixing to a Mix Bus like I am here, and your Master Fader is applying plug-ins to just your main outputs, your outputs 1-2.

The problem is, is you're going to be doing double limiting. If you're doing any compression or limiting on your Master Bus, you don't want to add that to your reference mix, because for the most part, it's probably already been mastered and that's not going to be a very good reference if you're pushing it through even more limiting. What I like to do is I'll either set my reference to another set of outputs. In my studio I actually have it set up so that I can set the reference to output 3-4 and using my monitoring switching, I can quickly switch between the reference track and my actual mix.

But if you don't have those capabilities, a great way to solve this issue is mix into a bus, mix into a stereo aux track, and set your Master Fader to control that bus. So you're only applying the plug-ins to the Mix Bus here and not your main outputs. Now another consideration for working to a reference track is that most likely that reference track is going to be louder than your mix, because it's probably been commercially mastered.

Now, I don't like to compete on level immediately, when I'm working my way into a mix. Even to the extent that, I'm generally not starting with something like Maxim on my Mix Bus. I am generally not starting with anything on my Mix Bus when I'm first getting my levels and setting my dynamics, I don't want that Brickwall Limiter to catch me off guard or influence me in any way when I'm first starting the mix. Because of that, my mix is going to be much lower than the reference.

So if we just listen here. (music playing) Versus (music playing) You can see the mix version is much lower. Now it can be really hard to compare relative levels of frequency response and instrument balance, stereo field when one is a lot louder than the other, because you're constantly going to be going wow, it just sounds much better, when actually it's just more gain coming to your ears.

So you always want to level match your reference track, and so what I like to do is, once I bring that reference in, I'll actually pull it down and I'll just match it by ear. You could use a meter like the Phase Scope and you could use the average level to kind of get a good sense. I find that by ear is a lot better. It keeps me honest and keeps me working towards the overall sound of a mix rather than getting this huge level right off the bat. So I'll just listen.

Some engineers will pull in a song in the same exact genre, let's say, something that is a current radio hit or current chart topper in that specific genre that they want to go ahead and try to be competitive with or match. Other engineers pull in, let's say, a few different reference tracks, maybe from completely different genres, but what they're doing is that they're saying well this track has just the sweetest bass when I take it to any speaker system, and this track's got the best top-end, so if I can match that top-end, I'm there, or this track has a great lead vocal presence.

So, as long as I'm measuring my track against this track, it doesn't really matter the genre is different and I'm still a seeking those traits. So just be aware of what traits you're seeking in the reference, whether it's just purely sonics, like great low-end or great top-end, or you're actually trying to create a similar vibe, like vocal processing, and reverb, and delay, and drum sounds and guitar tones and things like that. Some engineers are going to refuse to use reference tracks because they think it influences them and stifles their creativity, and you know, there's definitely a chance of you following the reference too closely, but what I find is that if you're just starting out in mixing, you need just a little bit of help to stay on task, to keep your eye on the prize.

I think definitely working to a reference track or multiple reference tracks in the same session is really going to help you be able to get consistent results quicker. The reference track is really going to help you in situations like getting the correct bass level, even in a room with poor acoustics, because you can really A-B the two, and if you're close in terms of bass level or top-end, and it's a material that you know really well and you know it translates to the outside world, well then you know your mix is probably going to translate to the outside world.

Now once you're fully confident in your art and your tools, sure you can go ahead, you don't have to mix with a reference. You can totally just go it on your own and be creative, but I find it really does help mixers who're first trying to learn how to mix. And to that end, it might be a good idea to create yourself your own personal go-to reference playlist or CD of different styles and genres and different sonic qualities. That way you can easily import them into your session.

Now I like using lossless files or files from CDs so that I'm not also listening to the compression, the MP3 compression of a finished mix and trying to match that. Hey, but there might be something to that. If your mix is going to ultimately end up being compressed to an MP3, you might even add that to your reference list, like hey, this mix sounds really good when it's compressed with the really high bit rate. So experiment with this idea of using a reference track in your mix, in your mastering process, and I think you'll find it really useful. 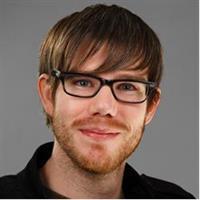 Video: Working with a reference track