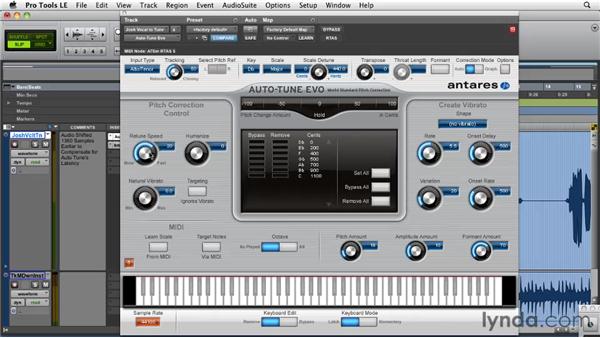 Putting the Auto in Auto-Tune, Automatic Mode processing has arguably done more for modern pop music production than any other plug-in in the history of digital signal processing. By analyzing the incoming signal and re-pitching it at near real time to a user definable scale of notes, you too can sound like a drunk robot with just a few simple knob tweaks and I am going to show you how,right here. So, setting up for Auto Mode I want to reiterate the input type. We are working with a male vocal so I am going to choose Alto/Tenor and the Tracking for now I am going to leave at 50, right.

It's actually retuning the vocal in real time. The Retune Speed here is set to 0 milliseconds is giving me that T-Pain or Cher effect where it is actually retuning the vocal in real time. So, for every period that's out of pitch or out of the target key it retunes that near instantly. That's how you getting that's sort of robot effect of always being in tune and as it falls out of tune or it transitions between notes it kind of has that vocoder-y effect of instantly quantizing the note.

Now, let's take a look at some of these Pitch Correction Control parameters here. So, like I said the Retune Speed is going to be how fast Auto-Tune retunes out of tune signals. So, it's detecting the incoming pitch in real time and it is correcting it to the key and scale that you have chosen here. And so if it's off of any of those notes it's going to quantize it to the nearest note that it finds and the speed at which it does that is based on Retune Speed. Now, this is set in milliseconds and like I said, if you want to go for the T-Pain effect, you are going to use 0 or some more close to 0.

(Man singing: And I'll never forget?) Right, you can hear it working a little but it's actually subtly improving the intonation of that phrase. So, again what you want to do with your Retune Speed if you want more natural results out of Auto, set it to a little bit slower. Now you want to set it fast enough to get those short notes. If you set it too slow, right, let's say like 400 milliseconds, it is only going to grab those really long sustaining notes. And maybe that's what you want. Maybe you just want to tune up sustained notes.

But if it's too slow it will miss fast phrases,altogether and if it's too fast you'll start getting some of those artifacts. Maybe you want those artifacts. But play around with the Retune Speed. It's probably the most important control while working in Auto Mode. Now, Humanize is a feature that works in conjunction with Retune Speed that allows some of the pitch changes to come through on more sustained notes, right, some in the Natural Vibrato on a more sustained note and generally, what you want to do with this control is if you find that once you have the short notes getting in to tune with the Retune Speed, you can turn up the Humanize parameter to allow a little bit more natural pitch to funnel through on the longer notes.

So, the way you would set it up is again first set your Retune Speed, then come over to Humanize and turn that up in small increments until you feel that the longer sustained notes are sounding more natural in terms of vibrato and allowing through some of those pitch differences from the curve. Now, when it comes to vibrato especially when you retuning things quickly Auto-Tune can present some problems. So, what tends to happen is if we think about what vibrato is, vibrato is actually modulation in pitch, mainly modulation in pitch, also modulation in tone and amplitude.

But that modulation in pitch, if it's so wide, what can happen is Auto-Tune can think it is an entirely new note. So, if you are let's say modulating on F and you modulate so far as to get up into E flat or down into G flat, it will actually tried to in real time correct those modulations or quantize those modulations to the next note up or down in the scale and this can sound really, really funky. I mean it may be something that you want, if you go are go in for an effect, but generally it doesn't sound too good.

So, there is two options here, you can use the Targeting Ignores Vibrato. Now this is one of those kind of hit or miss ones. So, you can see if that helps the targeting ignore any vibrato there. It works on some things. It doesn't work any things. If it helps you, turn it on, leave it on. If it doesn't help you, just turn it off. The Natural Vibrato setting will actually go in and adjust the amount of vibrato present in the signal so you can allow more pitch modulation. You can actually tone it down. So, if the vocal has too much vibrato, you can actually kind of reign it in.

So that you still have a little bit of modulation, but it's not as much as you had originally. So, depending on your skill level, ear, and the amount of time you want to put into editing a vocal, Auto Mode can be just what the doctor ordered. While, I personally find that I do my best work in Graphical Mode, unless I am looking for that specific Auto-Tune effect, it is important to understand the parameters of Auto Mode as they will come up later when we are developing a target pitch curve.

4/15/2010
Antares Auto-Tune Evo is a third-party plug-in processor that automates the correction of pitch and intonation, saving hours of time in the vocal booth. In Pro Tools Projects: Pitch Correction with Antares Auto-Tune Evo , author Brian Lee White explains the fundamentals of working with vocal tracks and how to correct common pitch and intonation errors using Auto-Tune. This course covers a variety of workflows and different pitch correction strategies in Auto-Tune, working in both automatic and graphical tuning modes. Exercise files are included with the course.
Topics include: