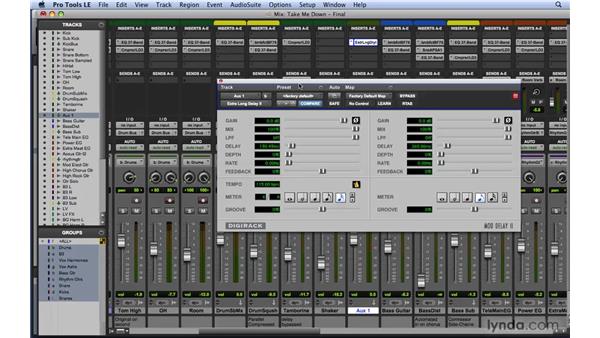 While inserts are a great way for applying effects processors directly to a signal in line, another method that engineers commonly use to route effects is via track's send output into a common effects return channel. A send-return relationship allows the mixer to share a single effect amongst multiple tracks and is ideal for time- based effects like reverb and delay. So historically, when people wanted to add reverb or echo effects to their mix, they would generally do so by having some sort of echo chamber or a room maybe in the basement of the studio where they would play the mix out or play a track out of a speaker and then record it at the other end with a microphone.

Recording and blending that echo back in with the original signal. Now, if they wanted to add reverb discreetly to each track, sort of like an insert effect, they would have to have tons of these echo chambers and that just wasn't the case. And so sort of the signal routing concept of effects returns and using sends to send multiple signals into a common effects bus kind of came up in order to share these precious resources of reverb and delay processors which weren't so abundant in the signal processing kit.

And so how it works in Pro Tools, in a send and return relationship additional signal from a track is sent out, we send output on to a bus and this bus acts as an internal routing pathway inside of Pro Tools. The audio that accumulates on that bus is then picked by an aux input track that acts as a return. On the aux input, the bus's signals are processed by the shared effect and then returned to the mix via the aux track's output. And so if we see in the Take Me Down exercise, a Send patched to Room Verb on multiple tracks is sending out signal and that's collecting on the Room Verb bus and that's going to accumulate down here at the end on this aux input track with its input set to that same bus, Room Verb.

And what I'm doing is I'm processing that track with a series of inserts on the return track. In this case I'm interested in the D- Verb, which is giving me my reverb effect. So if I wanted to set one of these send-return relationships up from scratch, go over here. So let's say I wanted to add a special delay to the Tamborine and the Shaker track. What I could do is create my return. So I'm going to create a Stereo Aux track and I'm going to assign that Aux track's input to a free bus.

So it's going to listen or collect signals from an internal routing pathway in Pro Tools called the bus. So I'll choose Bus 29-30. That's free. Now I'm immediately going to rename this. I'm going to right-click and choose Rename to rename the pathway. I could also do this in I/O setup, but this is a quicker way to do this and I'll call this SpecialDelay. And now I'll go ahead and insert the effect that I want to share on this return track. So we'll choose a Delay and I'll just choose the Extra Long Delay.

And I would configure my Delay plug-in and generally I would have the Mix set to 100% because the wet dry blend is going to come from the channel's dry signal flowing through the track through its outputs and the wet signal is going to be the sends as they accumulate on the effect's return track. Now I'll name this track. I always want to name our tracks. Now when I want to use these effects, all I need to do this from my Sends, I'll just right-click to get my Assignments view. And I'll use a free send to send to the bus, SpecialDelay, do it on the Shaker.

And now what I can do is if right- click again and I'll choose Send A, I can control the individual output of each send into that effect, right. So signals play out these two tracks, they are going to make their way into the SpecialDelay bus and accumulate here on this return, which is going to send its output into the Main Mix. So I'm going to get that wet and dry blend between the effect and the dry signal running out to the Mix Bus in this case. Now because I'm actually mixing my entire mix to a submix, which is what we'll talk about in the next video, I'll set my return's output to match that submix called my Mix Bus.

Now what I usually do is solo save my return tracks and that prevents them from getting muted when I solo other elements. So if I Apple-click on the S or it would be Ctrl-click on the PC, that would gray out the Solo button and that means when I solo other tracks, this track does not get muted. Allows me to preview or listen to the effect return even when I solo things and listen to them by themselves. So if we want to listen to the results of setting up this send and return relationship, I'm just going to select a section that has Tambourine and Shaker right here for verse two, and then I'll solo up these two here and let's listen to the result process through the delay.

So it's sort of like putting a return into another Return. So if I take and I bus the Delay track out into maybe the Plate Reverb and I turn this up here, what I'll be getting effectively is reverb on the delayed signal and this is actually sometimes a cool way to route effects if you want to apply effects just to the return tracks. To remove a send, you can click on its letter and say no send. Sends can also be copied by Option+ Dragging or just moved by dragging.

So using sends and reverbs is an extremely common routing task in mixing and it's really critical to becoming a strong mixer as it provides signal processing changes that are not possible with inserts alone. Not only does this help save on DSP by using fewer plug-ins and sharing effects, but in the case of time-based effects like reverb and delay, it provides sort of a common space for individual tracks to come together in the Mix, helping things gel a bit more and sit better.