Using this course with Pro Tools 10 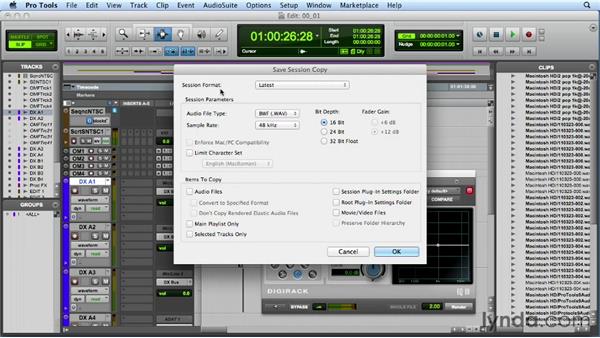 Join Scott Hirsch for an in-depth discussion in this video Using this course with Pro Tools 10, part of Pro Tools: Audio for Film and Video.

This course was originally recorded using Pro Tools 9, but we've ported the exercise files to Pro Tools 10 and have made sure the course is still consistent with both versions 9 and 10 of Pro Tools. In the Working with Audio for Video chapter of this course, I made two movies that cover new features of Pro Tools 10 that I find to be particularly suited for audio for video post-production. Before we get to that though, I'll just walk you through a few of the most striking differences in Pro Tools 10 from the previous version, Pro Tools 9 or Pro Tools 8. Session files now have a different suffix. Even though the icon is still the same, it's called .ptx, as we can see here, which is different from the previous PTF and PTS versions you're used to seeing.

Also, Pro Tools 10 session files are not backwards compatible with older versions. So if you want to share your Pro Tools 10 session with another system running Pro Tools 9 or 8, you can go to File > Save Copy In and here up where it says Session Format, Latest would save under 10, but if you go in this menu, you can save for Pro Tools 7 through 9 Sessions, 5.1 to 6.9, all the way down through 3.2 versions to Pro Tools. Next, there is some renaming going on. Most obviously, the name Avid is now used over the old Digidesign name.

Along with this change, Pro Tools naming follows the naming conventions used in Avid, the video editing software. And over here, where we used to see the Regions list, we now see the Clips list. Also, in the top menu, instead of Region now we have a Clip menu. In addition, the AudioSuite plug-ins where we go to process the file, it used to say Process, it now says Render, to apply the effect to a clip. In addition to the name changes, there're many awesome new features and enhancements in Pro Tools 10, and like I mentioned, we'll get into the more audio-for-video-worthy ones later in this course.

But for a detailed overview of all the new features, be sure to check out another lynda.com course, Pro Tools 10 New Features, by David Franz.