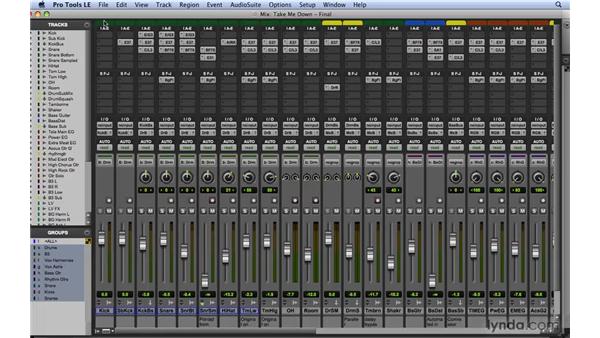 So the term signal flow in the audio engineering world refers to the path an audio signal takes as it plays back from the recording medium, in this case the hard drive through all of the routing and signal processing of the mixing environment. If you've ever worked with an analog mixing console, you'll be very comfortable with the signal flow of the Pro Tools Mixer. If not, don't worry. Because it mimics the design of most analog consoles, the signal flow is actually very easy to understand. So if we trace a signal from the hard disk to output, we can see that every audio track in Pro Tools, like most mixer channels, has an input and an output.

The input while recording defines the interface input that Pro Tools is going to capture or record from. Now, when playing back pre-recorded material, the input on an audio track doesn't really matter as the audio is going to feed off the playlist of your Edit window. So if we trace that signal as it comes from the playlist in the Edit window, the first thing we're going to hit are the Channels Inserts. We have 10 inserts. Now, Inserts are sort of like filters that are inserted into the track signal flow, and they run in series, and you can think of them as sort of like a funnel.

As the audio filters through this funnel, the inserts are like filter screens lined up. Another example you can think of is guitar pedals patched into an amplifier. So you have the guitar patched into one pedal and to the next pedal, and then eventually into the amplifier. So they run in series. So order tends to matter. If no inserts are enabled, the signal simply flows through the track out through its outputs. All inserts are pre-fader, so they act in response the level of the signals before it hits the level or pan control.

Now the next thing we hit are our Sends. Now, Sends allow us to break off part of a signal running through a track and send it out to another destination, and this could be a custom headphone mix for the person in the booth. But it could also be to a send and return relationship into an effect like a reverb or a delay, which we're going to cover the set up of. Now, Sends can be either pre or post fader. That is to say that pre-fader means they don't take into account the level as set by the fader on that channel.

Whereas, post-fader would take into account this level. Now, coming down here, we have our tracks Level and Pan when set to a stereo output, and that's going to define the level of attenuation or amount of gain that the Mixer is adding to the signal. When the level is at 0 db or what's called the unity gain, no level is being added nor subtracted to that signal. So it's going to playback as it was recorded from the hard-drive.

Now, there is another type of track that we'll see in the Pro Tools Mixer and this is called an Aux track or an Auxiliary Input Track. These are special types of tracks that are a lot like audio tracks, but they can't record audio. So it's basically just an input and an output with your Inserts and Sends, and Level control, but it's not going to be able to record audio. It's simply there for routing audio. So we're going to use them for sub- mixing, and send and return relationships which we'll go through.

So ultimately, understanding how signals flow through the Mixer in Pro Tools will become very important when trying to understand more complex mixing workflows outlined in the course. Take some time to play with the Mixer's signal routing capabilities and trace some of the signal flows in the exercise mix.