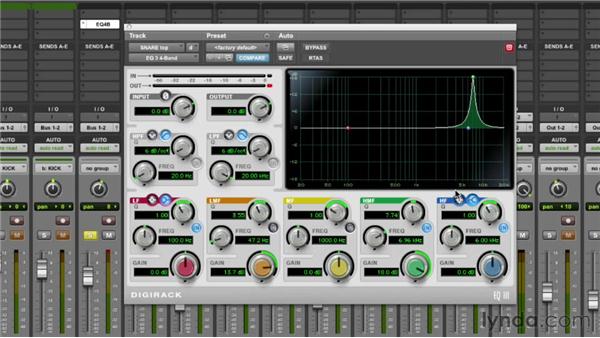 Most equalizers sound a whole lot different from one another, even though they might have the same basic parameters. Let's look at the controls of the basic Pro-Tools-native EQ plug-in. Now the one thing that differentiates one EQ from another is the number of bands it has. And as you can see here, we have a five-band equalizer: low frequency, low-mid frequency, mid frequency, high-mid, and high frequencies. Sometimes you'll only have four bands instead of five; sometimes you'll have three bands, sometimes you have even two bands, like on a guitar amp.

In this case, even though there are five bands, you can only use four at a time. The difference here is for the most part they're parametric equalizers, and parametric equalizers give you the ability to control three different parameters of the equalizer. You can control the gain, what frequency it works on, and you can control something called Q, and what this means, it's the quality of the filter that's being used. And really a better name for it is bandwidth, and bandwidth is how many frequencies it's working on at the same time.

As you can see, it's everywhere from about thirty cycles up to about 5K or so that's being effected at the same time. Now the beauty of the Q control is you can control the number of those frequencies. Take notice, we can zero in on a very narrow band of frequencies. And frequency control allows us to sweep those. You can hear it if you open this up a little bit. (music playing) I can really hear that what we've done is we've eliminated a lot of the lower- mid frequencies, and it sounds pretty boxy there.

So from 1K, it gets the most boost, and it rolls off from there. And as we move our bandwidth control, our Q control, still it's centered around 1K, but there are fewer and fewer frequencies that are controlled. Now, let's listen right there and what happens? Let's play it and just sweep through the frequencies, starting at 1K and moving downwards. (music playing) And of course now we're down below the main frequencies of the snare drum, so it's not going to affect it too much.

Each band has an IN and OUT control. As you can see on the graph there, EQ goes away until we put it in again, and there it is. The other thing that's interesting here is the fact that we can only have four bands at the same time. So now when we bypass the low-mid frequency, the mid frequency is available to us. Let's go to high-mid frequency and listen as we sweep through that as well. (music playing) Now you can really hear it. (music playing) And what we're going to do now is we're going to take that Q and we're going to make it really narrow and sweep through everything.

(music playing) Sometimes a combination of a really tight Q like this and a lot of gain makes the equalizer ring a little bit. And we can hear it here. It gives it kind of an overtone, and that's equalizer actually distorting a little bit, and that's because we've actually pushed the parameter controls just a little beyond what they're capable of doing. So we have to be very careful.

Generally speaking, any equalizer sounds best if you don't push it really, really hard. In this case, 18 dB of gain is way more than we usually use on just about anything. (music playing) And if we back off on that a little bit-- (music playing) Open up the Q. (music playing) And you can hear the difference. The high and low frequency controls also have an additional parameter which turns the band into either peaking or shelving.

It just gives you a lot of extra variations and a lot of extra ability. Now a couple of other parameters that we have that aren't available in all equalizers. There is a high- and lowpass filter which are very, very powerful and used quite often. And what this will do is it will either cut all the frequencies off on the low end or on the high end. And watch what happens. If we go to the highpass filter and we put it in, and you can see there are two parameter controls. One is a frequency control and the other is a Q control.

Once again, let's listen as we sweep the frequencies. (music playing) And what it's doing, it's cutting off all the low frequencies. Now we can exaggerate that by changing how quickly that roll-off becomes. 6 dB per octave is fairly gentle, and we can move this up to 24 dB per octave, and now watch when we sweep. (music playing) Now at about six hundred cycles you hear it, and before it was probably at about 3K before you start to hear it sound very similar.

It's very, very effective, but it also can add a little bit of ring, just like you heard when we boosted the Q and the Gain in the high-mid frequencies. The same thing can happen, and that's why most engineers keep it just at 12 or 18 dB per octave, and you can see how the roll-off changes. These are the number of frequencies that are controlled by the highpass filter. The other thing we have is a lowpass filter, and that's going to allow lows to pass and will attenuate the highs. Let's have a listen. (music playing) Now you can hear all the high frequencies go away, and the same thing happens here in that we have a Q control that allows us to control how fast those high frequencies go away.

(music playing) The high- and lowpass filters are very, very powerful and used by most of the top engineers more than you'd know. Just about every time you have an instrument, you can always use a high- and low- pass filter to help shape the sound a little bit. There are two other controls that we have: an Input control and an Output control. The Input control allows us to either attenuate or boost the level into the Equalizer plug-in.

The Output control allows us to either boost or attenuate the output coming out of the back end. And the reason why we would want that is the Input control will sometimes keep the Equalizer from overloading if a signal is too hot coming into it. And the Output control can either back off the signal so the next stage doesn't overload, or in fact, it will boost up the signal to where it was if you attenuate a lot on the EQ bands. (music playing) We can see the meters on the top. We have an IN and OUT control.

And when we back off in the input, the level goes down, and we can see the level goes down on the meter. (music playing) Now what we did is we actually peaked into the red, and by clicking, we get rid of those peaks. And the other thing that happens is the Output control-- (music playing) Just like you'd expect. One of the most important parts of an Equalizer is the Bypass control.

It's really important to be able to hear what the sound was originally before you EQed it and compare both of them, because sometimes you're not making it any better; you're just making it different. And to be able to go back and forth with just a flip of a button is really important, and it's something that you shouldn't forget is there. So those are the parameters of a typical Equalizer. Remember that with an Equalizer, less is sometimes a lot more, so make sure you use it judiciously.