Understanding the audio components of a finished video 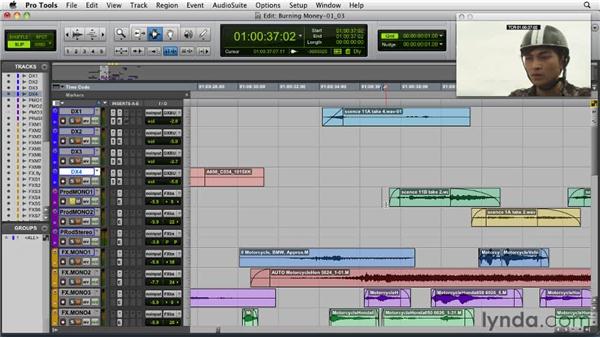 Join Scott Hirsch for an in-depth discussion in this video Understanding the audio components of a finished video, part of Pro Tools: Audio for Film and Video.

The audio-production and post-production workflow of a video, film, or multimedia project can be extremely complex and multifaceted. Understanding how and where audio and Pro Tools fits into the overall workflow of a video project is important. Even when working on the simple project, there is a certain order of events and a flow that is crucial to producing a well-conceived audio soundtrack. Let's get on the same page about what makes up a full-fledged soundtrack. We'll get used to some terminology and see some examples of how it works. The elementary components to a soundtrack are also referred to as stems.

Think of a large plant with many stems branching off into other smaller stems. The three main stems are dialog, effects, and music. Let's go through what each stem contains to make up the components of a soundtrack. Our dialog stems are contained in these dialog tracks, abbreviated as DX. We have four of them. Dialog includes any spoken words in the scene. These can be words recorded on the set, or the dialog might need to be replaced and overdubbed later after the film is edited. This is called ADR, if the set or shot didn't allow for clean production sound.

Voiceover narration is also considered part of the dialog stem. Here on the DX1 track we have an example of dialog that was shot on the set. I will use the T button to zoom in and later the R button to zoom out. (Vietnamese dialogue) So that's some dialog in the dialog stem there, recorded on the set. We also have some ADR in the session. On DX4 track down here, I will first play it with the whole session, and we can hear how it works.

Then we'll solo it up and listen to it by itself. (Vietnamese dialogue) Here it is. I'll solo it up. (Vietnamese dialogue) So even though it's ADR and is recorded later, it's still part of the dialog stem. The sound effects stem can include any artificially placed or real background or ambiance tracks. These are essential in making up the sonic world that our characters live in. Sound effects tracks might also include production effects, which are any non-dialog sounds that were also recorded on the set.

On a MONO FX track down below, FX.MONO4, we have a sound effect that's considered sweetening. Sweetening involves recording or sourcing sounds that enhance action in a scene. This particular sound effect was sourced from a sound library and is used to sweeten the original production effect which we just heard. First we will listen to it by itself, and then we'll hear the two together. (motorcycle revving) Here is the two together. (motorcycle revving) If there is a performance involved in making a sound effect, we call that foley.

Foley is a big part of effects work. It's best employed to lay in the sound of footsteps, clothing movement, breathing, creaking, really any sound that needs to be played to the action to match. A foley artist records these sounds while watching the video. In this session, we have a foleyed sound. I go down to our Foley track, solo that, and we can hear it. It's the sound of a helmet being taken off. This is performed after the fact by a foley artist. (clicking sound) There it is soloed, and let's hear it with the whole session. (clicking sound) Other sound effects, such as explosions, gunshots, non-musical tones, layers of source sounds, those are also all part of the effects tracks stem.

Then we have music. The music stem can include any source or prerecorded music, like a Rolling Stones song or an Erik Satie piano piece. Often source music is used as temp music in place during the picture-editing process until a composer can write an original music score. An original score is also part of the music stem. The score might be premixed at the time of the final film sound mix, or it might have sub-stems of its own. In this session, we have a premixed music track on this track called MX1. Let's hear it by itself.

(drums playing) And then we can hear it with the whole session. (drums playing) (Vietnamese dialogue) So those drums are considered part of the music stem and they are used to enhance the tension of this scene. In some cases you might have MIDI tracks as temp music to edit, which offers a lot of editing flexibility as you work. We can use Pro Tools to effectively work on all these elements of a film soundtrack, and it's up to the size and scope of the project as to whether there are different Pro Tools sessions for each of the stems or one main one like we see here where they are all part of it.

At some point, no matter what, they are all brought together in a final mix or re-recording session where the stems are combined and rerecorded to create the final print master tracks.

Video: Understanding the audio components of a finished video