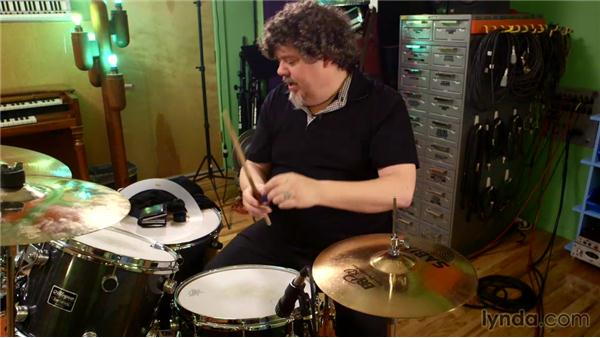 So now that we have the snare miked up, it's time to look at actually treating the snare drum. I used to think that the drummers would come in with the snares and the whole drum kit ready to go. But a lot of time things needed a little more attention than that. Especially the snare drum. So, think about this first. Look and check and see if they need a new drum head of course on the top. Sometimes a little bit of wear is okay. Kind of, the snare's been worked in a little bit, and it'll be alright. Double-check the bottom too. The snare wires here, first of all, if there's any missing here, get a new one.

You'll see sometimes broken off pieces splayed out. Clip them off, throw it out, get a new one. Make sure that these, these edges here of the snare wire are not hanging over the edge of the wood too. If they were hanging over the edge of the shell, that could be causing problems with the sound. Check the tension on the strainer here. A lot times people have it set too tight or too loose and that can change the sound quite a bit. Those are all pretty rudimentary things. Tuning is something I don't want to get into too deep. Basically, you want to have an even, amount of pressure pulling on every one of these lugs.

And you want to have a nice even tone to the snare. Now, what happens a lot is that, the straight snare, like this, has got a lot a ring in it, even when it's tuned well. You can hear that right now. (SOUND) Hear that kind of ping and that aftershock sound there? That's the ringiness of a snare. Now in some situations that's a really great tone, and it really livens up the snare. Works great in the mix. Other times, it's not so great. One of the things I'll use all the time almost is, moon gel.

Now moon gel is some funny little rubbery stuff. kind of like those gummy hands that they sell kids in gumball machines. It's stretchy, sticky rubber. And I'll put it on the snare head like that. (SOUND). Tap it into place. Now check out the sound of that. (SOUND) All that ringing and decaying of the high ping is gone. It's pretty cool. You can add extra pieces of moon gel. You can cut it in half and use a small piece as well. Common, a common trick too is the rings, the zero rings, those just lay here on the snare.

(SOUND) I quieted it down even more, little less ring. One thing I don't like about these is a lot of times, it seems to damp it down too much. We don't hear as much life in the snare. And for some songs, that could be great or for some styles of music that could be great. But I don't tend to use the rings very often. I tend to stick to the moon gel. Classic trick is this, the wallet trick. So, this is a fun one. Take the wallet, you gotta have a fat, heavy wallet like this full of cash. And believe me, this isn't my wallet.

Hang it over the edge of the snare. Press it down on the head. Listen to this. (SOUND). Ooh, that choked it in real nice and good. That's a pretty fun one. And then there's the classic. I think the, the Beatles would talk about putting tea towels on, on Ringo's drums. But since we're in a studio that doesn't have any tea towels handy, we got T-shirts. So let's throw one on here. You gotta hear this. Totally different. (SOUND) Dead.

So that's pretty cool. That's a real neat different way to capture the snare drum. Now, sometimes you're fighting with the drum, you know? You put up the original drum that's brought in. You're just, maybe they're playing the whole kit and the drum just doesn't sit right in the mix. It doesn't sit right with the rest of the drum kit. Well, you know what you do then? You just grab a different snare drum. And you know blue's going to sound a lot better anyway right? Put it in place. Maybe we'll put the wallet on this one.

(SOUND) Different sound. Always keep that in mind. And when you're arranging the songs, if you're helping with that part, think about that. Does the song even need a snare drum at times? I've worked with songs where we throw the snare out and do hand claps, wood blocks, different instruments that could mean, you know, lend a different sound to the track and make it unique. So always think about that. Don't take the instruments as they're brought to you, or don't think of a source as being pristine and you can't mess with it. Go in there and try treating the sound at the source and you'll get some really great rewards.