Strategies for mixing and mastering 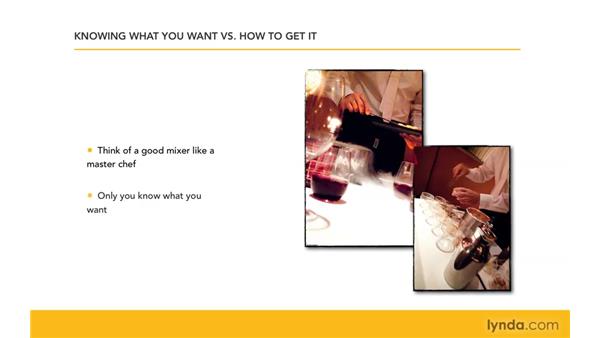 So many have described mixing as a sort of black art or something that you just know or you hear and can't really learn. Well, I'm not going to lie. It is one of the more difficult areas of study in a production workflow. You can learn how to be a better mixer if you approach this subject with the right mindset and expectations. So is mixing really a black art? Well, because mixing involves many technical aspects used in very artistic ways, and it can seem very confusing at first getting a handle on all of these techniques, when you approach it as an artistic skill that has no absolute answer or outcome as opposed to an objective skill like repairing air conditioner or a truck, your chances of becoming a better mixer over time increase exponentially.

So mixing is really no more of a black art than, let's say, composing a hit song or learning to master an instrument. So it's important to understand mixing's place in the bigger picture of music production. Remember that mixers aren't alchemists, right? Good mixing won't fix bad arranging, bad recording or poor editing, but a good mix can make a strong arrangement and recording sound even better. So remember, garbage in, garbage out. So how do we approach learning mixing? I like to call this knowing what you want versus knowing how to get it.

So mixing is more about expressing your personal vision for the song than using any one specific technique or trick you may have learned. So, for example, you may know every chord and scale on a guitar, but this doesn't translate directly into a hit song without that additional, sometimes intangible, component of vision or direction. Another analogy we can look at is a chef, so you can think of a good mixer like a master chef. A master chef, given a set of ingredients, can evaluate those ingredients for things like freshness, quality, etcetera, and decide how to best execute the tastiest recipe based on what's available.

On the contrary, if you approach mixing like a less capable chef relying purely on a recipe, you assume specific ingredients are present and that they are of the quality the original recipe specified. You almost never have these ingredients in music or post-production. So only you can really know what you want in a mix. I can't tell you what to want. I can only show you how to achieve a desired result. For example, I can show you how to make a vocal sound like it's coming from the back of a room, but it is still up to the individual to decide whether that is appropriate for the song or not.

Likewise, a culinary school can teach a budding chef how to cook, but they can't tell him what he should like to eat. Above all, you definitely want to keep an open mind in the whole process. There is more than one way to achieve a goal. Some techniques and workflows are more common than others, but in the end there is no one right way or wrong way to approach mixing, just as there is no universally accepted best style of music or best tasting cuisine. Explore as many different styles of mixing as possible, read articles, talk to other mixers.

Always remember to take everything you read or hear with a grain of salt. The mistake many beginning mixers make is to take everything they read as the gospel, especially if it comes from an authority on the topic. Make sure the tip or technique you are learning works for you and carefully consider how it might help your unique workflow. Try to listen as much as possible. In the end, you will learn more by listening to other mixes than any book or tutorial will ever teach you. Just like many songwriters gather inspiration from The Beatles and The Rolling Stones and other great artists, gather inspiration for your mixes from your favorite music.

In the end, there's really no magic recipe or secret to mixing. Many beginning mixers think that if they just knew that one trick, they would just transcend space/time and become the world's best mixer overnight. Believe me, there is no conspiracy where the pros keep all the tricks from the amateurs and control the world's amazing mixes like some sort of secret society. If there is any one secret, it is an intangible one, the same intangible secret that makes one song a hit and another song a flop and they both share the same chord pattern, tempo, key, vocal style, etcetera.

So I'm not going to lie, there will be struggles, especially in the beginning, and you will continue to struggle and grow for the rest of your mixing career, but don't give up. Somewhere down the road you will reach a point of competency and feel that you are getting the results you want. But if approached correctly, mixing isn't something that you learn how to do and then move on. It is a skill that you will work on and evolve incrementally over the course of many years as technology and genres and your own learning abilities evolve.

So keep at it.

Video: Strategies for mixing and mastering