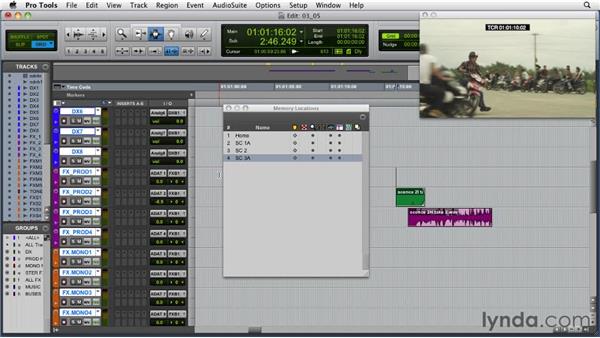 Join Scott Hirsch for an in-depth discussion in this video Spotting film and using markers, part of Pro Tools: Audio for Film and Video.

Early on in audio post-production, you want to call a meeting with the director, producer, music composer, and any other creative forces behind the film. This type of meeting is called a spotting session. Let's go over some techniques and ideas on how to document the spotting session with markers or memory locations. It's called spotting because that's what you will be doing with the filmmakers, spotting exact places in the video where sound ideas can develop. Markers, also known as memory locations, are a good way to document and place- hold exact frame-accurate spots for sound events to occur.

Command+5 on the numeric keypad opens the Memory Locations dialog box. Before you have your spotting meeting, it's incredibly useful to make frame- accurate marks at the scene boundaries. Most film scripts have specific numbers of scenes, so if you have access to the script, I advise you use these numbers, as the director and producer will already be familiar with those numbers. So, let's go into the timeline and make markers at each scene. You should go into grid mode and be exact to the frame boundaries of each scene. Before doing anything, I usually make a home marker somewhere between the two pop and the start of the movie.

I will zoom in a little bit and there's our two pop, so if I make it right around here, hit Enter on the numeric keypad to make a marker, and I am going to call this Home. I am also going to give it a couple of different attributes. As you can see, Zoom Settings, Track Show/Hide, and Track Heights are selected, so those will come back anytime I bring up this marker. Click OK. You can see we have our first marker in there. Now, I am going to timecode hour 1, which is the start of the movie. So, I am using the Plus and Minus keys on the numeric keypad to nudge back and forth and get it exactly at hour 1.

This is the start of our first scene. This is called Scene 1A. Here, I am going to type Enter, type in SC 1A. All of our scene markers are going to start with SC. Now, I am going to find the end of this scene and the beginning of the next scene. So, I am just kind of clicking around, and this scene ends when we go to the crowd here, so I am going to go back a few frames. Again, we want to get it exactly on the frame boundary. That will help us later when we lay in ambiences.

We can use these markers to help guide us. So, right there is the frame boundary. That's the previous scene. If I hit the Plus sign, I've got the next scene. Enter again and this is going to be called SC 2. We'll do one more of these, which is the end of this crowd scene, and it's the beginning of the race. And it's right around here. There is the end of the crowd scene. The next frame is the race. So, on the first frame of the next scene is going to be SC 3A.

Again, I am using the plus and minus keys to nudge forward, and it looks like the crash starts right about there. So, it's kind of like that shot. Before I lay in a marker here, I'm going to actually change my view, and I'm going to do Ctrl+Click to show only the effects tracks in my group, for one, and for two, I am going to make all of those effects tracks by holding Option and Shift, make them all large.

So, I am just kind of changing my view a little bit, because I am going to be doing some fine-tuning sound effects work here. So, I did that before I made the marker. Now, I am going to hit Enter, and since this is an effects marker, I am going to demarcate it with an FX,= before I make the names=, and this one I am going to call FX crash. Now, also there's a Comments field. This can be pretty useful. In this case, I received a comment via email from the director, which I saved in a text document here. He said he wants to hear the crash sound to be very traumatic.

So, I am going to copy that, paste that into here. So, if someone else was working on sound effects, or I needed a reminder, I can paste that into the Comments field. Click OK. So, now if I go back to my Scene 1A, notice that the track view changes back since we have added those attributes of track size and show and hide. And if I go to the crash, it snaps me right back to that view. So, we are going to want to go on and create markers for any significant effects. We are going to create music markers.

We will demarcate those with an M. We are going to maybe do some ambience markers, ABR markers, all of the spotting things you need to do to spot places in your session where things occur, and you can make up some nomenclature like I did to differentiate between the different types of markers that you are laying in. And when you're done, it's going to look something like this session. So, here I have made a bunch of markers and I've done all of the scene boundaries for this whole sequence. I've done some music markers, M start and M end. I have done some FX markers and even some ambience markers.

Now, another thing you can do with memory locations, or markers, is to use the numeric keypad to quickly snap to different markers. To do this, it's a combination of a couple of keys. You use the decimal point, then the number of the marker, which we can see on the left-hand column, then decimal point again, and your cursor will snap to that marker. So, Scene 1A is number two. So, if I zoom in a little bit, we'll see this happen. I am going to type '.2.', and you can see that their cursor automatically snapped to Scene 1A. So if I do '.7.', it snaps me right to the FX crash, and then I can always go home, '.1.'.

That's a quick way to use markers to navigate to different spots in your session. You can also click directly in the markers timeline and then once you're in there, you can hit Tab, and that will just move you to the next marker, and Option+Tab moves you to previous marker. So Tab to the next marker, Option+Tab to the previous marker. Deleting a marker is really simple. You just Option+Click or Alt+Click on the marker to delete it. You can do that here in the marker timeline--undo that--or you can do it in the Memory Locations window.

You can see when I hold down Option or Alt, I get a little eraser tool. I can delete that and undo that. One other cool thing you can do with markers is you can display some color here in your markers timeline. So to do that, we go into Pro Tools > Preferences and under Display, we can check Always Display Marker Colors. Once I hit OK, you can see that Pro Tools puts a color between each marker. It can be kind of helpful to see visually where markers begin and end. So as you can see, it takes a little time to set up these markers, or memory locations, but it sure beats having a spreadsheet or scribbled note that's offline from your Pro Tools session.

This way it's integrated, and you can recall the spotting notes and locations lightning fast.