Setting up your subgroups 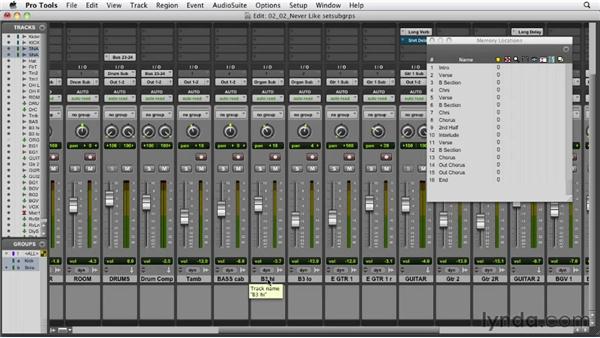 Groups and subgroups are extremely useful during mixing because they allow you to group similar elements of the mix so you can make adjustments by instruments sections rather than individually. In this video, I'm going to show you how to set up groups and subgroups and why they're so important when mixing. The first thing that happens when we're mixing is we usually have a lot of similar instruments that are together. Now, if we look at the Kick Drum, for instance, we have a mic that's inside the Kick Drum, which is Kick in, and we have another one that's outside, which is KICK out. They both sound different and if we take a quick listen, you find out that both of them sound good, but they sound even better together.

Now if there is anything else we want to put in there, it'd be really easy. All we'd have to do is say Hat, Tom, or whatever and then just say Add and it'd be there. In this case, this is only for Kicks, so Kick in and KICK out is just enough. Now we'll go to Name and we'll say this is Kick. As we move one fader, the other one follows, and they follow in exactly the same proportion as we left them. So watch. (music playing) The other thing that happens is the mutes also follow.

If I want to mute both channels, and I'll say I have five channels that are all linked together, they'll all mute--or they're all solo, and that's the kind of the beauty of that as well. So that's group. We can also do the same thing on the SNARE drum, for instance. And once again it's the same thing where the SNARE is very precise in terms of level between them. Now if we come in and have a listen here, as soon as the SNARE comes in-- (music playing) So that's the top of the SNARE drum.

(music playing) That's the bottom. You can hear the snap of the bottom. You put them both together and they sound pretty good. Now, once again if we want to raise both channels and say we just need to goose it a little bit, or even if we are writing both channels, we wanted to write a fade something like that, it'll be pretty difficult to do both channels at the same time, so that's why we'd like to group it. So, once again we'll say Shift+Click on both channels so they are both selected; Command+G, which brings up our Create Group; and in this case, we're going to say Snare.

You can see currently in the group SNARE top, SNARE bottom. And an interesting thing also in Pro Tools is we can see the group is named, and what will happen is right now these are grouped together. You can see the SNARE go up and down and mute together, they solo together. But if I come over here and I deselect it, all of a sudden this group goes away, and you can see just one fader at a time moves.

Come over here, we select SNARE, both of them are grouped again. So that's a group. Sometimes we don't want group though; sometimes we want something called a subgroup. And the subgroup is a little bit different in that it adds an extra fader, but it gives you a bit more flexibility. What we're going to do is come over to our B3. Now, the B3 runs through a speaker cabinet called a Leslie, and the Leslie has a rotating horn on the top for the high frequencies and a rotating horn on the bottom for low frequencies, and it sounds something like this.

So now we have our subgroup, and the first thing we're going to do is we're going to name it. So again, we bring our mouse over, we right-click, and it comes up, and it says Rename. I always name subgroups with caps. So in this case, it's an organ. I'm going to say ORGAN in capital letters. This is an easy way for me to differentiate between earlier audio tracks and subgroups. The next thing we have to do is we have to actually assign the tracks that we want to go into the ORGAN subgroup.

So for instance, we're going to say Bus 19. We haven't used Bus 19. Now, I want this track to go to Bus 19. So now, if we take notice, when we hit Play, both tracks are soloed, but we don't hear them. The reason why is we also have to solo the subgroup track. (music playing) Now we can hear both tracks together. And just like with the group, the subgroup allows us to move the level of both tracks up and down.

Take notice of the differences though, that the levels of your individual audio tracks don't move as they do with groups. But here's the cool thing that happens: with a subgroup, we're able to actually add an EQ or any kind of effect across a subgroup, and that, in fact, works across anything that's assigned to it. So for instance, if I want to add reverb, I'll come up here to the SEND, but I'll do it on the subgroup. Say we want to go to the Short reverb. Okay, now listen.

(music playing) Now what ended up happening there was I was able to add some reverb to both of those B3 channels. Now the beauty of this is this allows you to add just one reverb instead of two. Now, for instance, if you had five background vocals, for instance, you'd be able to add reverb to all five with just one subgroup.

This saves you some system resources because instead of having five different EQs, you only need one in this case. So if I wanted to EQ both the high and low channels of the B3, all I'd do is I'd add an EQ on the subgroup and both channels would be EQed, and that's kind of the beauty of it. Now this enables you to do a very, very quick and easy mix, because in this case I'll have a subgroup just for my drums. Now I have one just for the organ. I have one over here for guitar. I have another one for a second guitar.

I have one for vocals. And by doing this, instead of having to move individual channels after I got my balance, I can just move one channel and move the mix in different directions. So this is a very powerful way of doing things. To sum it up, groups and subgroups allow you to group similar elements of the mix so you can make adjustments by instrument sections rather than individually. In a group, a number of channel faders, like drums, are digitally linked together so that you can move one fader in the group and they all move, yet they all keep the same relative balance.

In a subgroup, you assign the desired channels to a subgroup fader, which lets you insert processing in all that channels that were assigned.

Video: Setting up your subgroups