Setting up the compressor 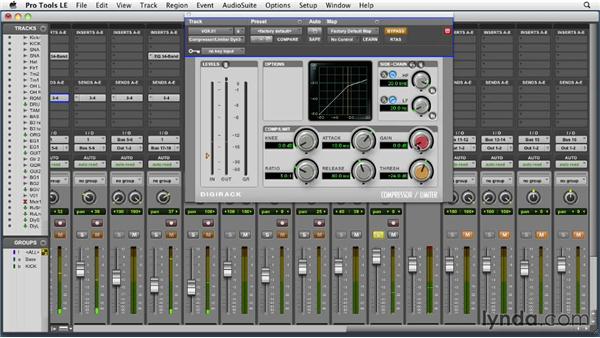 Join Bobby Owsinski for an in-depth discussion in this video Setting up the compressor, part of Audio Mixing Bootcamp.

In this video we are going to look at how to set up a compressor. I am going to show you how to configure the compressor so it breathes with the track, how to turn it into a limiter, and how to determine how much compression is right for the track. Timing of the attack and release is importance so the compressor works correctly and makes the sound punchy or fatter or makes the note have a longer decay. One of the easiest ways to set that up is to use a snare drum as your template, then use the same approximate Attack or Release settings for the other instruments. The idea is to make the compressor breathe in time with the track.

(music playing) You see some go -10; some goes little bit higher. And in fact this drummer is actually pretty good, because he is pretty consistent. But what we are trying to go is we are trying to get that snare hit to be the same every time. So now let's play the same thing with the compressor in. (music playing) And that determines how much compression we are going to use.

We will probably do it on the guitars. We will do it on the vocals. We will do it on any instrument that has any kind of variation in dynamics, because what we are trying to do is control the dynamics here. You can't make the dynamics completely go away--and you don't want them to--but you don't want the variation to be great as well. If the go, oh, 3 dB either way, that's probably good; if it goes more than that, it's probably too much. Let's try the compressor over on the vocal. Now the first thing we are going to do is we are going to add it in here, and again, this is just a native compressor that comes with Pro Tools.

Don't forget that just about all the parameters are somewhat the same, but even if they're different, it doesn't matter; what we're trying to get is the sound. We are trying to get the compressor to breathe with the track, and that's the most important thing. So let's listen to the vocal without the compressor. (music playing) This is pretty good, because it's actually been compressed when it was recorded, but we can still do a few more things to it.

In this case what we are trying to do is make sure that every word is heard, so we don't want a word to drop out at all; we want them all to be the same. There are some that will drop out anyway that you'll have to use automation and actually goose the fader a little bit so you can hear it, but for the most part we can get most of them with the compressor. So let's set this up. Let's unbypass it. So the first thing what we are going to do is we are going to set our Attack and our Release approximately the same as we did with the snare drum. This might change a little bit, but this is a good starting point.

So I will put 188 in for the Attack, and we will 12.3 in for the Release. And let's dial in the Threshold. The Threshold actually controls at what signal level the compressor is going to begin to work at. And let's move this back, so we can hear it working. (music playing) There we go. We can hear it there. (music playing) Now what's happened here is these Attack and Release settings have to be tweaked because you can hear the change in the vocal sound, and that's not what we want-- we want it as pure as we can get it.

With compression, it almost sounds like the vocalist is in the room with you; he comes closer to you in the mix. You can hear every single word that happens. In fact, there is a byproduct here. You can keep the vocal lower in the mix and still hear it really well. Without the compressor some of the words of the vocal will drop out and you won't hear them. One of the reasons why we would like to keep the vocal lower in the mix is it emphasizes the power of the band. On a pop record, usually the vocal is really on top of the band; it's really loud compared to the rest of the band.

But if we want the record to sound really powerful, then we would like to keep the vocal down even with the band, and the only way you can do that well is if you compress the vocal; otherwise it will sound weak. So this is what we'll do with all the other instruments that need it as well. We will go and we will listen to them and we will see if there's a big variation in dynamics, and if there is, we will insert a compressor. The amount of compression that we will use is the amount that will keep the dynamics relatively solid so you hear all the chords; there's not one that drops out that we can't quite here.

And that's what gives you the feeling of having the vocal in the room with you. So let's talk about limiting. Right now, we have the Ratio set to 3 to 1, but anytime the Ratio goes beyond 10 to 1, this turns into a limiter; it goes from a compressor into a limiter. Now compression is used to control dynamics. What we are trying to do is take any peaks and bring them down, and we're trying to bring up any of the notes that are getting lost. What we are trying to do with limiting is to keep the next stage in the signal path from distorting.

So in this case what that means is it's going to take 11 dB before even 1 dB comes out, and that will probably mean that we can take any kind of peaks and not have a problem with the stage afterwards distorting. So there's a different mindset with using each of them. Sometimes we use limiting of 11 to 1 or 20 to 1, or even higher, in order to change the sound of an instrument or a vocal. Because usually anything that's 4 or 6 or 8 to 1 is just controlling the dynamics and we don't really hear it work, but anything that goes beyond 10 to 1, we begin to hear the color of the compressor.

Sometimes that's what we want; sometimes it isn't. Okay, let's listen to the difference between compression and limiting. We are going to go back to a ratio of 4 to 1 and have a listen. (music playing) We can hear the sound change, but listen when we go 10 to 1. (music playing) Now all of a sudden the sound of the compressor is what we hear more than sound of the vocal, and it gets more severe as we go.

Let's go to 30 to 1, which is really quite high. Let's listen in the track. (music playing) (music playing) In this case, we can actually hear the compressor working, and what it's doing is its taking some of those peaks and it's actually bringing them down too low.

So the vocal sounds unnatural. That's why we like to use compression rather than limiting most of the time. There are times when limiting is really desirable--for instance, on a bass. The reason why is we want to keep the bass at a pretty solid level. We don't want it to vary too much, because as it varies it makes the song sound not as powerful. It sounds a lot more powerful when the bass is at one level. So that's one time we might use limiting instead of compression. Most of the time would like use compression, though. So that's how to set up the compressor.

You should time the compressor so it breathes with the track by using the Attack and Release controls. An attack that's too fast will dull the sound of the instrument or vocal, while a release that's too short will cause it to pump. A ratio setting of 10 to 1 or more is considered limiting, because it's trying to limit the output rather than control the dynamics. The more compression you use the more you will hear it working, and the amount of compression depends upon the song, the arrangement, the player, the room, the instrument or vocalist, or the sound that you're looking for.

Video: Setting up the compressor