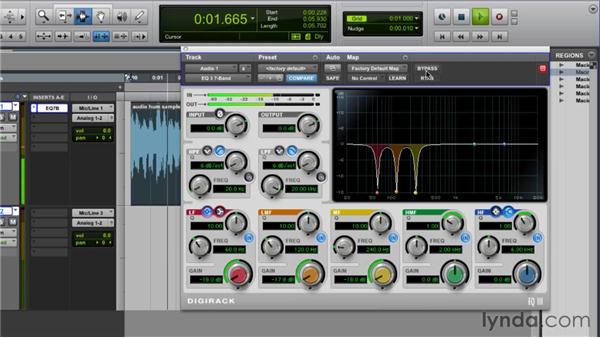 Join Scott Hirsch for an in-depth discussion in this video Noise-reducing hums, rumbles, and buzzes, part of Pro Tools: Audio for Film and Video.

Noisy tracks are one of the most common problems encountered in producing a video and a lot of the time it's the reason why someone came to you in the first place for audio help. In the next few movies we'll go over a workflow and some techniques for dealing with some of these common audio problems. The first of these problems we'll deal with is hums, buzzes, and rumbles that might occur during your audio. These are harmonic tones that range anywhere across the frequency spectrum and they're continuous throughout. First region here is a pretty common hum scenario where we've got a tone going through an otherwise well recorded voiceover.

Let's take a listen -- (Woman speaking: Here's an example of bad audio hum. For this type of type of audio problem, start with an equalizer.) So as the voiceover artist suggests, we should start with an equalizer. Equalizers are a good way to deal with this kind of problem because they are able to notch out any of the frequencies that are causing the problem, and since they are continuous we can use it throughout the course of the region. So let's start with an equalizer. I am going to go in to the Real time plug-ins and choose the EQ 3 7-Band EQ that comes with Pro Tools.

So this type of hum is a very common type of hum that you will find in countries like the US who use electricity based on 60-hertz cycles. It's actually called 60 cycle hum and that gives us a pretty big clue of where to start putting our EQ notches at. So actually the first place we're going to look is at 60 hertz in the Frequency Spectrum and that's usually where I start if I am not sure where the problem is. So I am going to go into my lowest band. I am going to change it to its parametric setting, which is this icon here.

And I am going to set the frequency to 60 hertz. You can do this with the knob or you can just double-click in here, select it and type 60, Enter. The Q is this knob above. That has to do with how wide or narrow the band is. So in this type of notching out EQ, we're going to want this Q to be a very high value. The highest it goes in this case is 10. So the higher the value, the narrower the notch is, which we'll see as we introduce the EQ with the Gain knob. So the Gain knob lets us actually increase the level at that frequency or decrease the level at that frequency of 60 hertz.

So just to hear, a lot of times what I do is I increase it and play back the audio and see if that's where the problem lies. So I can play back the audio and I can even sweep the frequency back and forth and here 60 hertz is really the center frequency of this noise problem. So I am going to go ahead and play it back and I will be sweeping the frequency. Right now we're introducing higher gain at that frequency. (Woman speaking: Here's an example of bad audio hum. For this type of type of audio problem, start with an equalizer.) So you might have heard as I sweep the frequency, as I left and went higher than 60 hertz, it didn't get as loud as when it was right at the center of 60 hertz and when it went below, it was also little quieter.

So that gives us a pretty good idea that this is indeed a 60 cycle hum. So at this point what I would do is I just back off the gain all the way down. Let's listen to it and this time I'll be bypassing the plug-in in and out. (Woman speaking: Here's an example of bad audio hum. For this type of type of audio problem, start with an equalizer.) So it does sound better when the equalizer is in but you still heard the hum. Well, that's because actually sounds like this are harmonic in nature. So above 60 hertz we also have the doubling of that, which would be 120 hertz, and above that we are going to have 240 hertz.

So those are all different nodes along the frequency spectrum where this hum will repeat itself. So I am going to set the EQ to deal with that and go ahead and make the same types of settings and a low mid band here, and I am going to set this to 120 and I will notch that down and I will set this one to 240. So that's double that, and I will notch that down. So let's hear it with just these three bands in. (Woman speaking: Here's an example of bad audio hum. For this type of type of audio problem...) Now I will bypass it.

We're taking care of a lot of the hum and one last move I would do here on an equalizer is I would clear up anything at the very lowest frequency. So that could be a rumble or it could actually be even lower than 60 hertz frequencies, and because this is a female voiceover artist her voice is going to be up in the higher ranges. So we can actually effectively take out anything below say 50 hertz would be fine. So I'll click this in, and it's the High Pass filter, so it's letting the high frequencies pass. Turn this up to the highest slope, which is 24 dB/octave, and I will move this up into say somewhere around 45 or 50 hertz.

And we'll hear this one more time and I will bypass it and unbypass it and you can hear the difference we're making. (Woman speaking: Here's an example of bad audio hum. For this type of type of audio problem, start with an equalizer.) So that's pretty effective there. Now, the next hum region we have in the session doesn't have any voice but it's just hum by itself. Go ahead and take off this EQ for now and let's listen to it by itself for a second. (White noise) So that could be some good background noise for a scene except it has some lower frequency hum in it.

This one is a little more illusive. It's not at 60 cycles. So how can we find out where the center nodes are? Well, one way is we could sweep around an EQ. I want to show you another visual way to look at audio and that's to use a separate application that comes really in handy when you're doing any kind of noise reduction and it's called the iZotope Noise Reduction RX. What I am going to do is export this audio. This is a typical workflow that you can use while you're doing any kind of noise reduction. So I am going to actually go Shift+ Command+K or Shift+Ctrl+K for PC and we export this file. Export it as a WAV, Mono, 16 bit, 48 kilohertz file and I am going to actually go to the desktop and make a folder called NR.

That stands for Noise Reduction. So open that folder and export this file. And now I am going to tab over. I have the RX application open and from here I can go ahead and go File > Open and I am going to go to the Desktop, back to that folder, and there is that region that I exported. And I will open that in iZotope. Now the reason I wanted to show you this is because iZotope offers you another way to look at audio. In Pro Tools you see audio visually like this, like a waveform. It's amplitude versus time.

Now iZotope RX gives you another way to look at sound and that's by looking at frequency versus time. So across the X-axis we have time and across the Y-axis we don't have amplitude like we see in Pro Tools, but rather frequency, ranging from 0 hertz to 20,000 hertz and we can even zoom -in on this a little bit. So if I do that and I scroll down to the lower frequencies, we can see pretty obviously here that this audio has some continuous hum type noise at 100 hertz, as we see this horizontal line, 200 hertz, 300 hertz, and somewhere up here at 600 hertz.

So we can use EQ now that we know those bits of information, just like we did in the first example, but this gives us a visual representation to find those bands. So it's a nice tool to have to just see visually where some of your offending frequencies are. So that's a good way to deal with hums and again EQs are pretty effective if you can get EQs with a high Q setting, meaning a very narrow notch, and in the next couple of movies we'll deal with some other noise problems.