Mixing "in the box" 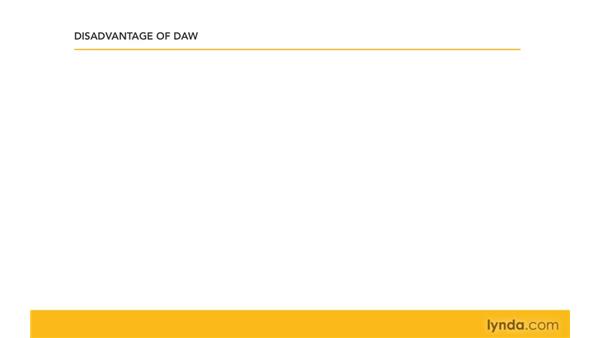 Traditionally, records were made using entirely analog equipment, from the tape machines that recorded the tracks to the mixers that combined them together. While there were many advantages to a completely analog workflow, such as the warm saturation and non-linear qualities of tape and tube gear, engineers often found it hard to edit tape-based material, recall complex mixes or collaborate and share ideas outside of the studio. Not to mention the fact that this analog recording gear was generally extremely expensive, making high quality recording only available to a select few.

Fast forward to today. Because of the speed and power of today's computers, it is not uncommon for the recording process to take place entirely inside the computer from start to finish, what is commonly refereed to as recording in the box by most recording engineers. While we are still analog beings, and still need a few analog tools like microphones and speakers that we will need to interface with the computer, it is safe to say that we are fully transitioned into the era of DAW or Digital Audio Workstation.

So, what is a DAW? In the DAW world, most of the components of the analog studio are replaced by DAW software running on a computer. So, a DAW replaces the recording medium so versus tape or another digital recording medium, it also gives us an editing environment versus sort of the razor blades of the tape era, and we also get mixing in a fax or plug-ins versus the console and outboard gear of the analog era. So, what are some of the advantages of mixing in a DAW? Well, first of all, you have complete recall ability and so this gives you consistency.

Your mix can move anywhere in the world and sound exactly the same, versus the analog days, it might have taken you hours to recall one song on a console with outboard gear. So, the DAW really lets you develop your mix over time. Another thing that we get in a DAW is an amazing automation package, so you can automate almost anything. And that's not something you are generally able to do in the analog world. Try automating a piece of outboard output gear like an 1176 or Pultec-EQ consistently. Pro Tools probably has one of the best automation packages available in any mixing environment both analog or digital.

The price performance of a DAW is unmatched, so those with the right skills can sound like a million bucks with just a $1,000 laptop studio. Now, some disadvantages or considerations that you will often hear about mixing in a DAW is the lack of tactile control from the analog world. So, in analog, we generally have a knob or a button or a fader for everything that we need to do, and in a DAW, we generally using our mouse and our keyboard. However, many manufacturers have stepped up to this challenge and developed control surfaces to supplement this, in either sort of like large mouse keyboard setups that give you buttons and faders to control the functions of the software.

Many people in this generation of recording are okay using a mouse and a keyboard to mix. One of the other common things you will hear about mixing in a DAW is that there was a lack of sort of de-facto warmth or saturation if you will that is often gain with using analog gear. Now, to me, this isn't necessarily a bad thing but it's just a fact about working in the box and something you have to get used to. The mixer will not add any coloration like an analog mixer will.

Coloration is generally added to taste using saturation plug-ins or outboard gear and it's really important to understand that while the mixer doesn't add any coloration, it's not taking anything away. So, you can get really great accurate sound in recordings and then yourself control the amount of saturation or coloration that you want in your mix. Bottom line is that you can get a great mix completely inside of Pro Tools. So don't let the highbrow articles and fancy advertisement get you down about mixing in the box or not using analog gear.

What works for one person might not work for someone else. So at the end of the day, a strong mixer is going to be able to create a great mix inside or outside of the box, and no one is going to be able to tell either way. I used to supplement my plug-ins with expensive outboard gear but I have more recently move my mixes entirely inside of Pro Tools, as I find a value recall ability and flexibility more than the slight advantages I gained, time my work flow to physical pieces of equipment. For example, rebalancing a client's mix at a different studio in the same night as their performance, with Pro Tools, I can recall the whole mix as long as I have the plug-ins, it's no problem.

You know, it's not to say that using analog gear or summing mixers or analog console is a waste of time. It isn't. Everyone has to find what works best for their style and voice as a mixer. So, for me personally, I find that mixing in the box inside of Pro Tools provides the greatest amount of flexibility in my work while providing an excellent sounding environment to creatively shape the mix exactly how I heard in my head.

Video: Mixing "in the box"