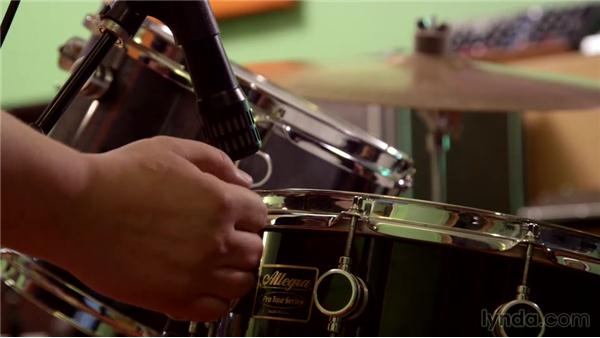 When recording a drum set, to me the snare sound is one of the most important and iconic parts of the drums. I really spend a lot of time focusing on capturing great sounds there. There's definite sounds that you hear on snare drums that define styles of music. That define eras of music. Think of the 80's. And you really want to make sure that you're capturing something that works for the stuff that you're recording here. What I go for is generally like a very natural, strong recording. A very clear recording of what's happening with the snare.

And I want to do the best job I can, even if I'm going to be doing stuff with the gated drums later and samples layered in over the top of my snare recordings. I'm going to go for a really strong, clean snare sound to begin with. Picking microphones to use on a snare is important. I like to go for a dynamic mic generally for the snare. Top sound because I've used condensers in the past and brought them in here. And I can get a wonderful, crisp, top hand, a great attack of the snare.

The stick hitting the top of the head. But also, I get sometimes too much high-hat. And that can enter the mix in a really nasty way like, I used to think of it as ice picks in my ears when they got recorded improperly. So that's always something to consider. Another thing is, is that a dynamic mic can handle really a lot high SPLs. So you know, that's why we typically see like an SM57 or such on the snare while you're recording it. And another thing to consider too, is damage. If you put a very, very expensive mic on the snare, if it gets hit, you might have to repair it, or maybe you'll owe someone a new mic, and that can be a little bit of a problem there. So, let's talk about the positioning of the microphone on the snare drum. I got my friend Dave here, he's come in to play drums with us. He's going to help me out.

Now, a lot of times if you go to like a live show or something, you'll see a microphone pointing towards the center of the snare head. What I find is that captures a little bit too much of, just a thud, the hit at the center of the, of the track. Let's hear that. (MUSIC). Now, what I started doing, the first time I recorded I would put it like that because that's what I'd seen the sound men do at shows and it didn't sound right to my ear.

So I started experimenting with it, and I kind of came up with a position that I really like where I angle it down towards the edge of the shell here. Let me move this out of the way so you can see a little better, too. Now, this might look a little crazy, but I really like the tone I get here. Partly I hear more of the shell, I hear a little more of the bottom of the snare wires down here (SOUND) coming through. And I get a good crack. I get enough of the top head to hear that. Let's sort of get a few hits on that, Dave. (SOUND). That's a good, easy, basic place to start with a snare sound. One thing I like to do as well, is to add in a bottom mic. I got this funny little mic, an EV Electro-Voice DO54 vintage mic, I found real cheap awhile back, and I'll put it down here. kind of point it towards the center of the bottom, where the wires are, you know? Go for that. Now when you got two mics on a snare like this, one thing you gotta remember, first off is that they're going to be out of phase.

They're both pointing basically in opposite directions on the same source. So they're going to be 180 degrees out of phase. You can flip the polarity on this mic and these two will work together much better. Alright, let's go ahead and hear a little bit of that. (MUSIC). And that's pretty cool. One thing to think about too, while you're mixing especially, is you could gate this track down here, so only when the snare's being hit do you hear the bottom, and that way you kind of clean up your snare sound.

It doesn't rattle when you're hitting just the toms and things like that. That can work out pretty cool. So my friend, Andy Hawn told me this trick that he uses. He takes an omni-directional, small diaphragm mic like this Earthworks TC 30K and he puts it about a quarter inch from the shell. I know this looks totally crazy. Really close, pointing right at the shell of the snare drum and as long as the stand doesn't rattle or move around too much or we hit the mic, we're safe.

Now, this sound is kind of cool. It picks up a lot of the kind of full picture of the snare. It's not quite the same impact that a dynamic mic is going to get, but it is a really neat tone. So let's hear a little bit of that. (MUSIC). Cool. And that's a totally different way to capture the snare. So I'd, I'd suggest taking all the mics you've got, trying them on a full drum kit, recording the snares, see what other sounds show up in there. If the other things bleed in too much, then it's not going to be a good choice. If it's too expensive of a mic and you don't trust your drummer, be careful. We have other movies also about treating the snare drum. You should check that out.

It's really fun. You get to see some great techniques and yeah, go forth, try some different things out, but make sure you always get a really good first recording of that snare.