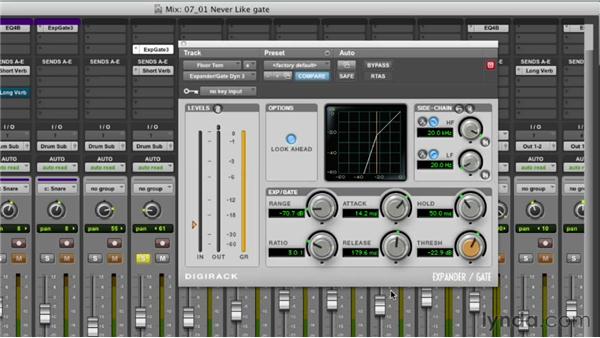 A gate is sort of a reverse compressor that can be used to eliminate leakage noises and buzzes and coughs and any other low-level noises that were recorded on a track. Sometimes it's called a noise gate or an expander, but it's all the same thing. In this video I am going to show you all about the various parameters of a typical gate. So a gate works backwards from a normal compressor in that the sound level is at its loudest until it reaches the threshold, and that's when it becomes decreased, or even muted completely. Like a de-esser, a gate can sometimes consist of just a few controls, principally the threshold, the range, and sometimes even hold, attack, and release controls.

Also just like a compressor, threshold selects the level where the gate begins to work. First of all, let's listen to the floor tom with the gate bypassed. (music playing) So you can hear the leakage from the other track. And now let's take the bypass off and have a listen what happens. (music playing) And you can here how it attenuates everything else except for the loudest section.

We can tweak that. Actually, before we even do that, let's put the threshold all the way up and have a listen to what that does. (music playing) And as you can hear, you never did hear the floor tom, the reason why is the threshold set so high that it can never be triggered. And if we put it all the way to left at -60.0 dB listen to what happens. (music playing) The threshold is set so low that once the gate opens up, it doesn't close again, because there's enough level to keep it open.

So now what we'll do is we'll tweak that, we'll put it somewhere in the middle, and have a listen, and tweak as it goes along. (music playing) And let's back that up even a little more. (music playing) Now in order to make it sound realistic, we don't want the gain reduction at max. What we'd rather have is the audio attenuated rather than completely cut off.

These are the same as on a compressor. We are going to affect the front end of the signal envelope with the Attack control and the back end with the Release control. Let's listen to what happens as we manipulate the Attack control. (music playing) That's with it at 10 milliseconds. Let's put it all the way up to 300 milliseconds and have a listen. (music playing) It actually sounded pretty good. Let's put it where it's really fast.

This is 10 microseconds. (music playing) And what's happening is it's so fast that the leakage is actually triggering it. So that's way too fast, and what we want to do is back that off until the leakage didn't trigger the gate. (music playing) Now that last snare hit we may not be able get rid of. That's one of the fallacies about a gate, that you can eliminate everything, and you really can't.

You can attenuate things and you can get rid of most of them, but sometimes on fills, for instance, and especially on a drum kit, you just can't get rid of everything, so you have to keep that in mind. (music playing) That's pretty good. Now if we take the Release control and let's put that all the way fast and have a listen to what it does. (music playing) When it's fast, it controls the envelope of the signal, and it shuts it down completely really, really quickly, and let's put it the opposite way where it's a really long release, have a listen.

(music playing) And you can hear it fade out because the envelope is kept open by the release control, and then it gradually fades in from there. Now it's more in the middle like this, have a listen. (music playing) The other control that's important is the Hold control, and this holds open the gate before the release control kicks in. And we can set this at 5 milliseconds and listen to what happens. (music playing) We can put it all the way, so it's a 4 seconds and listen what happens.

(music playing) It's holding the gate open so much that it never gets a chance to close, so obviously that's not going to work either, and it's somewhere in the middle here. And again, you have to experiment with it. There's no formula for it. You just have to experiment until you get it right. Gates are very touchy things, and they do require experimentation. (music playing) So that's pretty good there.

But it would sound even better if we back off on the Range. Somewhere near is about where we'd like it. (music playing) See, we don't want to get rid of the leak completely; what we'd rather do is attenuate it, and it sounds a lot more natural,. And it's one of the fallacies of the gate that you want to get rid of everything completely, and you really don't. You just want to move it back in the mix enough that you really don't hear and it's not prominent. Now one of the cool things about gates is the sidechain.

Not all gates have a sidechain, but when you have it, it can be very powerful. And what this does is tune in the band of frequencies where the gate actually activates. And the other thing you can do is actually control this from another channel for instance, or from another output device, but really it's the high and low frequencies that you can balance out here, so we can affect that band of frequencies that opens the gate. So now what we're going to do with low frequency is we're going to back that off, and basically we're cutting everything off under 16 kHz. Have a listen.

So if we take this off, have a listen. (music playing) And the reason why it doesn't sound so good is it is just listening to the attack of the sound, and really what we want is the body and everything. So I am going to back that off, so we can hear more of the drum, have a listen. (music playing) And you can hear how it even cuts off the snare drum at the end as a result, and what we'd do is we'd use that sidechain listen in order to tweak everything and fine-tune the opening of the gate. And this is especially effective on a snare drum, for instance, where we can really tune it just so that those high frequencies open up the gate. It works really, really well.

The last thing is the Look Ahead button, and what that is it's a function that you only find in modern digital gates. It looks ahead at the signal so it can react only to the peaks. And this is a brilliant function that you don't find on hardware gates, and the reason why is hardware gates are analog and usually they're a little slow at working because they don't have this Look Ahead function. The Look Ahead function really does look at the signal a few milliseconds ahead of time and allows the gates to have enough time to react, and this makes it very, very precise.

So those are the parameters of a gate, which is an audio component used to eliminate or decrease noise or leakage in the track. But like compression, remember that a little goes a long way.