Laying down the bass 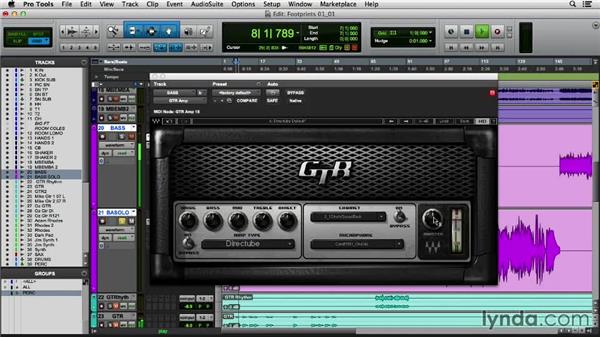 Join Dave Darlington for an in-depth discussion in this video Laying down the bass, part of Mixing a Modern Jazz Track.

Ok so we've got our drums rocking, it's time to add a little bottom with the bass. We've got two bass tracks because, the bassist put this solo on the, another track probably so he could do a number of takes or maybe edit his takes together. But let's work on the, main bass first. Let's listen to it in solo. It's a directly tracked bass guitar, just plugged it into a good preamp. The first thing I would do. Would be to give it a little air. With an amp. So since it's a, kind of a direct sound anyway, we don't want to really overdrive it too much, but we just want to add a little, oomph.

Maybe a little cut like that. I might experiment with cabinets just to see what. Very interesting different colors. Something like that sounds really good. Let's add a little compression. Start with, maybe Unity. This is a volume-dependent compressor. Hm. So the level is very low, so we're not really hitting the compressor too hard, but. We have it in line, and if he hits anything that's really loud, it'll just, roll of some of those attacks.

Oh, that's too much output. As you can see. Yeah, it's definitely working. There we go. So I'm just going to try to do one or two DBs. And then watch my output. A lot. Okay, now we're compressing just a little bit, but we're not, really changing the sound too much. We don't want to do that. And you can see how it sits right on top of the drums. You can clearly hear all his, articulations. And when we get the rest of the band in, we'll tweak that level, so we have a nice bottom and clarity, but we're not taking up too much area. In the lower mid range, we want to just really be careful about the output.

So we don't clip. And check the master every once in a while to make sure we're not, clipping here. That sounds pretty good. Let's move over to his solo. Which looks like, a little hotter. So the same bass but he's playing in a higher register. So maybe the same stuff will work. That's where we're getting a lot of our level I, I now realize. And don't be afraid to go back and correct your mistakes. That happens to me all the time. Where, I didn't realize something, because I was focused on something else and I, just moved this.

Amp over and I saw that with a hotter signal, the output was way too hot, here. So now that makes me think, well, maybe I should go back, and maybe that's why the compressor was acting so strongly, here. Because maybe the guitar amp is a little bit, too loud. And, I can see that, my instincts were kind of right, although I'm not really clipping, but it probably wouldn't hurt, to just give myself a little head room here. And that'll lighten up on the compressor too, so that's a win win all the way around.

And after you discover things like that, then you assess the sonic repercussions. So now we basically got the same amp, and the same bass. I might, drag the compressor and read it here in his loud stuff. 'Kay, a little strong, and a little, crunchy. That's probably this drive. Now a solo like this, if you've got all day to mix, you could go through, work in Slip mode so you're not locked to a granny note. You could start doing things like this to shape, the volume contour.

This is pretty work intensive, so. Something fast and, note intensive like this is going to take a long time to really go through that. Although it would definitely sound good when it's done and you'd have to, check your work in and out of solo. But there's a really great plug-in called Bass Rider, which can help you even it out. This is the range of how loud and soft it would be, so we want to keep it in a pretty narrow range, and this is the target volume, so let's just. So that you can see Bass Rider, which has a very few quick settings.

It's, doing a lot of our work for us. Now let's just, check the relative levels of the two bassists to make sure. He's going to come forward during his solo but it's not going to take over the world. We just want him to step a little bit downstage. Now since he's the soloist here, it's a little dry, so look I'm going to experiment with different. The room sounds kind of cool, let's try the plate. I kind of like that one. And there's no hard-and-fast rule about what kind of reverb might work on what things. There's, things that engineers have tried in the past that work, like room on a drum, or hall on a saxophone, but, there's plenty of room to experiment.

If anybody tells you that they always do the same thing on the same instrument, they're lying because, it would be the same mix every time. So, I tried the room, that actually works because it's short. The plate works better for me for my ear. I might maybe shorten it, a little bit. This is a fast tempo, so I'm just going to, go to the plate, and bring the time down. Which is also going to affect the snare drum, but I think that's okay because we don't want it to take up to much room. I have the plate here on the snare and toms. And now it's on the bass solo. Kind of gives them a little bit of a singing tone, a little bit of makeup for his big moment in the spotlight.

And we can see there's going to be backing, support tracks here, so we'll finesse that as we break things in. We'll keep doubling back and adjusting the work that we've done, based on the new information that we get when we add instruments. But I think, our bottom and foundation is sounding really tight and strong and it's time to bring in some, harmonic stuff. 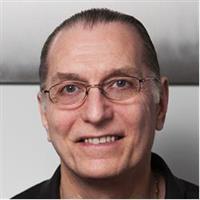 6/12/2014
What makes a great modern jazz track? An award-winning producer like Dave Darlington helps. Here he demonstrates the mixing techniques he uses in his own studio to transform raw audio tracks into a polished master. In just seven movies, Dave shows you how to focus on instruments (like guitar, keyboards, and sax) instead of vocals in a jazz session; develop a clear drum sound; use bass to drive the bottom end; and master the final track, creating multiple versions for the artists, management, and the label in a single step.

This course features the song "Footprints" by Andy Galore. Find out more about Andy's music at andygalore.com.

Video: Laying down the bass