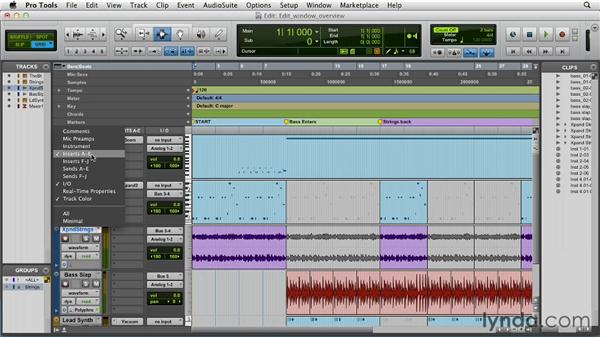 Join David Franz for an in-depth discussion in this video Exploring the Edit window, part of Pro Tools 10 Essential Training.

This is the Pro Tools Edit window; it's probably the window you'll use most when working with Pro Tools. I've opened a session here that already has some tracks in it, but I want to talk about the individual parts of the Edit window. At the top, we have got the Edit toolbars, and right now if I go to the Edit Toolbar menu, you'll see that I have just a minimal setting and that consists of the edit modes, the edit tools, the counters and the grid and nudge values.

If I go over to the Edit toolbar menu, I can add additional things like the Zoom Controls which show up over here and the Transport. I can actually go down and click All, and that will extend even beyond the screen what we can see here. Now if you want to see some of these that are beyond the view, you can press Command on the Mac, or Ctrl on a PC and click and drag them and move them around.

Below the Edit toolbars we have the Universe window and that's this small group of colored lines, we can show or hide that, and that just represents all the tracks that are down here in the Edit window, you'll also see the color coding that matches up with the markers that are shown here. We can show and hide those particular things over here in the Edit toolbar menu as well, you'll also see in the menu the Tracks List, the Clips List and the MIDI Editor.

The MIDI Editor shows up at the bottom of the screen. If you've MIDI tracks, you'll see some tracks in there and I'll activate that now. We'll talk about this in a later video, but I just wanted to show you that it's here. You can hide it by clicking this button right here. On the left side of the Edit window, we have the tracks and the groups lists. The tracks list show all the tracks that are in the session. If we click on one, it highlights the name of the track.

The tracks list also contains the Tracks menu where we can show all tracks, show only a few tracks, hide all the tracks and sort the tracks. Below the tracks list is the group's list. You can group multiple tracks together to create a group, and then work on the tracks in that group simultaneously. There is a group list pop-up where you can create new groups, display different groups, modify the groups and delete groups. I'll show you more about how to make a group in a later video.

On the right side of the screen we have the clips list, and this shows all of the audio and MIDI clips that are in the session, it also has a pop-up menu, and we have a wide variety of things that we can apply to the clips here and we'll talk more about that in a later video. In the top center, we have all the rulers, bars, beats, minutes and seconds, samples. We can go over to the Ruler menu and choose which one that we want to see.

Below the rulers we have the Edit window view selector where we can choose what we want to see on our tracks. Right now, I have got the inserts, the I/O and the track color showing. If I choose minimal we'll only see the names of the tracks with the track colors. If I show all, you can barely see any of the tracks, because we have all of these things that we can view, so we have the tracks, the comments, or we can type in anything about the track. The Mic Preamp section, the Instruments section, the Inserts where we put plug-ins and virtual instruments.

The Sends, we have 10 different sends, the I/O, so that's the input and the output, and the volume and panning, and Real-Time Properties which we can apply to any MIDI or instrument track. I'm going to go back to Minimal. In each track we have the Record button, Solo and the Mute buttons. We've got the Track View which will show us all kinds of different views of the track. So in this particular case on this instrument track, we have the clips view, you can show the notes and a wide variety of others even down to the audio volume on the track, and these are the automation views for the track view, you can also show multiple views of this track, if we show and hide the automation lanes.

So now we the clips view up here, as the main view, the velocity is down here and we can add more and choose whatever we want. Below the Track View selector we got the Patch selector, if we click that we can choose a different patch if we have a MIDI device connected to this, we'll talk more about that later. We have the Automation mode selector and we'll talk about this later in a different video, we have the Time-based selector which we will also cover in a different video, and if you go down right below the track you'll see how the cursor turns into a double arrow if you click and drag you can make the track larger or smaller in height, and you will see that some of the features of the track either get hidden or become really small buttons.

You can also adjust the height by clicking right here, and that works on any kind of track. On audio tracks we have the current elastic audio plug-in if there is one in this area and down here we have the polyphonic one showing, we'll talk more about that in another video, and while we are down here in this corner, let's look at the Show and Hide buttons. Right here we can show or hide or vice versa.

We can toggle between showing and hiding the tracks and groups lists, and we have the same button over here where we can show or hide the Regions list. Right around this buttons are some zooming buttons, we can zoom in and out and make things taller or shorter, and MIDI zoom in and out right here with audio zoom in and out. And finally the last button here we have the Keyboard Focus button and we'll describe how that works in another video as well.

So as you can tell from this video, you can do about everything that you need to do to your tracks here in the Edit window, I'll get into the specifics of all the features in this window in many of the other videos in this course. 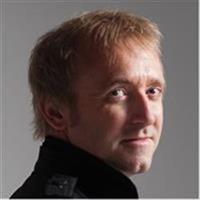 1/20/2012
Pro Tools 10 Essential Training with musician and producer David Franz illuminates the process of recording, editing, mixing, and mastering in Avid Pro Tools, the industry-standard software for music and postproduction. The course covers recording live audio and adding effects on the fly, creating music with virtual instruments and plug-ins, editing for time and pitch manipulation, creating a musical score, and mixing and mastering a track.
Topics include: