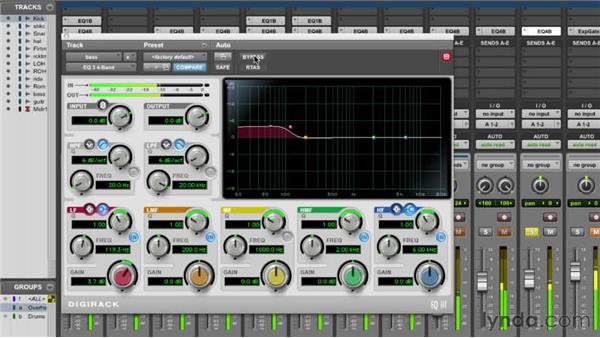 The bass has both the power and the foundation of the mix and it's usually best to EQ it along with the drums to get the best frequency balance. That said, there are few common frequencies with the basses EQed, so let me show them to you. The first thing to remember is that the low end on a bass usually comes a little bit higher than everybody thinks. Everybody thinks if they crank up 40 or 60 Hertz, then in fact you're going to get a lot of bottom. Well, what they usually get is a lot of mud if that's the case, and usually somewhere around a 100 or 120 or even a little bit higher sometimes will give you the sound that you're looking for.

This is the old fashioned way of doing things. So I'm going to make this sound a little bit better using some EQ. Once again we'll go to our 4- Band EQ, nothing fancy here. it's just the native plug-in from Pro Tools and non-extravagant plugin. First thing we're going to do is we're going to go to 120 cycles and watch what happens when we add a low end here. Usually what we're trying to do is EQ above where we EQed the kick drum. So if we EQ the kick at 80, then any where above that is going to work. Or even below that.

I want to make sure that we don't EQ with the exact same places they kick, because then they both will clash. Let's bring this up about 3db and have a listen. (Music playing) Let's exaggerate it a little bit, so it's easy to hear. (Music playing) Next thing we're going to do is add a little bit of attack and that usually comes that around 700 Hz. 700 is sort of a magic number because it will really make it stick out in the mix.

So that's how we EQ the bass, Remember the low end comes from somewhere around a 100, but you might want to add a little at 60. The attack is at 700 Hz and the finger snap is somewhere around 2K to 3K. Also remember, if you add too much bottom, you're going to make it sound too big for the mix and it's going to be lot harder to fit all the other instruments into the mix.