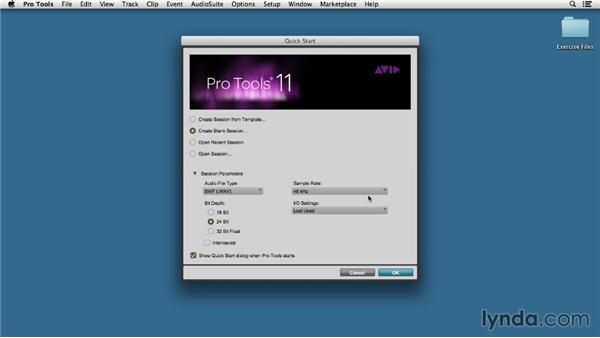 Join Skye Lewin for an in-depth discussion in this video Creating a new session, part of Pro Tools 11 Essential Training.

In this movie, let's create a new Pro Tool session. When you launch Pro Tools or choose New Session from the file menu, the quick start dialogue opens. Here you can set all the options for your new session. You can create a session from your template and here we have all kinds of grid presets for Guitar, Music, Post Production, Recording and Mixing, Song Writer. You can take a look through this and I'm sure you'll find that some of these are very useful. We can also create a blank session, open a recent session, or open a specific session. We can also choose to show the quick start dialogue when Pro Tools starts, or if you don't want to, you can hide it and just bring it up by creating a new session by selecting file, new session.

You can see it's grayed out right now because we actually have the dialogue open. So for now let's create a blank session, and I just wanted to cover some of these session parameters, so you have an understanding of what they are. The Audio File Type is a codec, which is really a container for the digital audio and how it's stored on your hard drive. Broadcast Wave or BWF Wave files are the default, and I actually prefer to use these. And you can also choose to use AIFF files. However, Pro Tools 11 can incorporate both wav files and aiff files in the same session, so what this really is telling Pro Tools is what format to write to when it's recording new audio or creating new audio.

When the number is higher, it means that more snapshots are taken per second which means that the resulting audio file will have a higher definition, in other words, more samples in a second. More like the original signal. Let's go ahead and set this to 48 kilohertz or 44.1 kilohertz, and one thing that I should point out is that choosing your sample rate when you create a new session really kind of depends on the project that you're going to be working on. So for example, if you're working on a TV or film project, you'll probably want to choose 48 kilohertz because that's the standard for broadcasting television.

If you are working on a music project that's importing audio from CDs, you may want to create a session at 44.1 kilohertz because 44.1 kilohertz is the standard at which CDs are recorded. And if you're recording a high definition music project, you may want to record at a higher sample rate, perhaps 96 or even 192 kilohertz. One thing to keep in mind is that higher sampler rates require more hard drive space. 96 kilohertz files are twice as big as 48 kilohertz files, assuming that the bit depth and the file length are the same, because there are twice as many snapshots being recorded per second.

The bit depth basically maps each sample to an exact digital amplitude value. And that's converted to binary digits or bits. So when you have 16 bits, that means you roughly have 66,000 different amplitude levels. And 24 bits give you actually over 16 million different levels. So the higher the bit rate, the more accurate the representation of the analog sound can be. In other words, if you have more bits, the level at each of those snapshots from the sample rate can be more accurately recorded and give you a broader dynamic range.

Also keep in mind that a higher bit depth. Requires more space on the hard drive. For example 24 bits is actually eight bits more than 16 bits so the resulting file size will be one and a half times larger assuming that it's the same length of recording and at the same sample rate. In the I/O settings we can choose to use the last used I/O settings. Choose the preset of Stereo Mix, or 5.1 if you're working on a 5.1 system. And there are also several other presets included for various hardware setups. And you can even create your own I/O settings.

We'll discuss how to make custom I/O setups in the next chapter of this course. The Interleaved option at the bottom here, tells Pro Tools that it's okay to write a stereo file, as one file rather than splitting it into a separate right and left file. Prior to Pro Tools 10, Pro Tools would split the left and the right side of a stereo file into two separate files that would be recorded onto your drive. So you would have a separate left and a right file, rather than an interleaved stereo file that played both back. So by checking interleave, we're telling Pro Tools that when it records a new stereo file, it's okay to just make it one file instead of two.

Once you've set all of your session parameters click OK to save the session. Here let's enter our name, I'm just going to call this new session, and I'm going to go ahead and save it to the desktop but you can choose any location that you want to save it to, and once you press save, Pro Tools will open a new blank session file unless you chose to open a template. We'll cover the interface and elements of this Pro Tools session as we progress through the course. Now that you have a basic understanding of digital audio and signal routing in Pro Tools, you'll be better able to use them effectively when you're creating a new session. 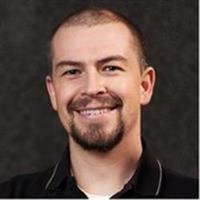