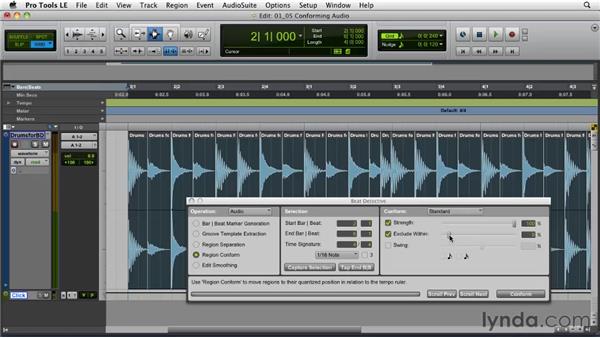 So, now that I have my slices from the Region Separation operation, I can go in and conform this audio to the grid, make it feel a little bit tighter. First, let's go ahead and listen to it against the Click Track and see what we're up against. (Drums playing.) So, pretty bad. If you can't hear those problems, you can definitely see them as you zoom in here.

There's stuff that's ahead of the beat, stuff that's behind the beat, and we're going to attempt to clean that all up with Region Conform. So, before I switch to Conform and conform anything, I want to make sure that my selection is accurate and reflects exactly what I have selected in the Edit window. Again, if you need to Capture Selection, do that because if you make incorrect selection at the Conform stage, some weird things can happen. You'll often get a message that says The Selection Bar|Beat values do not appear to be correct.

Please click on 'Capture Selection' or enter corrected values. Sometimes you don't get this message and your audio gets shifted somewhere else in the Pro Tools Edit window. So, one of the main mistakes people make when conforming is they either don't make an accurate selection, or don't retain an accurate selection from the Region Separation or Analysis stages, or during the Trigger Analysis, they didn't pay attention to those trigger points, and they are actually identifying wrong relative positions. And when it gets into Conform, Conform is going to actually quantize.

And unlike MIDI quantize, it's not just going to move the beats to the nearest grid position. It's going to move those beats to the relative position that was extracted during the analysis portion. So, it's really important that you pay attention. It's a multi-step process. And if you miss something at one point along the line, it can really affect you later in your operations modes. So, I've got this selected, and I'm going to go in here and choose Standard Conform. I can also conform to a Groove template that I've either created myself or from the Groove templates that come with Pro Tools, and I'll choose Strength of 100%.

I can choose lower Strengths to retain some of feel, and I can even use the Exclude Within option to say, "Hey if something is within 10% of its grid point, just go ahead and ignore it." It's fine and so this allows you to retain some of the natural feel or groove in your audio. For this one, we're just going to go 100% and if I wanted to add some Swing to the 8th note or the 16th note, that's going to push the offbeat later in time. I could adjust this here. But we'll leave this off for now, and I'll hit Conform, and let's go ahead and listen one more time.

(Drums playing.) And that's significantly better. Those are almost exactly on the grid point. Now there are some holes here because what it's actually doing is taking the slice and moving it. It's not warping it or making it bigger or smaller in the case of elastic audio. It's actually taking the whole slice and moving it over to the grid point. So, you could do this manually yourself if you wanted to.

You could go in and just grab that little region, and move it onto the grid. This saves you a lot of time because it keeps things from overlapping, and it's just a one-click thing. You always want to listen and make sure it did its job correctly. Like I said, if it's starting the sound weird or pushing beats to weird places, generally you made some mistakes earlier on in either the selection or analysis portion of your Beat Detective workflow. Now once it's been conformed, I can go ahead and reconform. I could add Swing if wanted to, (Drums playing.) or take that off. I think when you start really working with this, you'll start to recognize how modern music has really being changed by Beat Detective, specifically this Conform option.

If you listen to music from the nineties and earlier, things were a little bit loose and maybe even out of time, for better or worse. Now if you take a modern pop rock recording and you bring it into Pro Tools and you get the Tempo, it's dead onto the grid and no drummer is that tight, or very few drummers are that tight. Beat Detective has played a big role in changing the sound of modern rhythm tracks. So, these slices, generally, they're going to sound a little bit and nasty right at the gaps that we've created. And so in the next stage of edit smoothing, we'll go ahead and clean those up by filling the gaps and adding in crossfades.