Building the mix from the kick 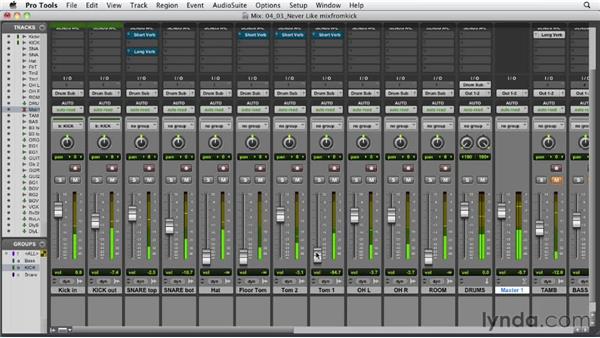 Many mixers like to build their drum mix from the bass drum, because it's part of the foundation of the song. In this segment, I am going to show you how to start with the bass drum first and build your mix from there. The first thing we are going to do is take notice that there are two kick drums that says Kick in and Kick out. That means that there was a microphone inside the bass drum and there was another one that was outside the bass drum. So, the very first one that we will raise is the Kick in inside the bass drum, because it's a little bit more aggressive-sounding. (music playing) And now we'll bring the Kick out, and you'll find this has a lot more bottom to it.

(music playing) You can hear the low end come in. If we have too much, it's all we have is low end. Now the best way to do this is just bring it up enough that you can barely hear it. (music playing) And that's about the right level. Now we've got that level, and we can look over here. We see on the master it's going about -10 on its peaks.

That's a good place for it to be. And now we've already assigned a subgroup; now we are going to engage it on the kick drum, and the reason for that is now with one fader, we can move both of those channels up and down in level and still maintain the relative balance between them. So now that we've got the sound on the kick drum, now we are going to bring the snare up to about the same level. Now it doesn't mean it's the same level on the channel fader; it means it's the same level that's worth listening to, the same relative level.

There is a sound of both of them. Now if you look over on a master fader, you can see how all of a sudden it went from about -10 to about -7 on peaks, and this is what happens if you have the same level of two instruments: you will get an increase of around 3 dB. The next thing I like to do is bring the overheads up, and the reason why is the overheads will add to the overall sound of the drum kit.

There are two types of overheads: you have overheads that are used as a cymbal mic so they're really close the cymbals, and then you have other overheads that are up higher trying to capture the overall kit. Either way, you will do about the same thing. Bring them up until you can just hear the cymbals on cymbal crashes or ride cymbals. (music playing) Let's go back to a place where there's--there we go. (music playing) And we will bring the second one.

We are not going to pan them yet; we are just going to bring them up. (music playing) We don't want those cymbals too loud, but we do want to be able to hear them, and we want to hear them with definition. The next thing we are going to do is bring the toms up. Now one of things that will happen is that toms will change the sound of the entire drum kit. That's not a bad thing, but it happens all the time. So you can't fall in love with what you have right here without the toms and then all of a sudden have the sound change and then worry about the fact that it's changed.

It's the fact of life; it is going to change. So here we go. Bring the middle tom up first. (music playing) And you can hear how everything has changed already. Mute it. You can hear the ring of the tom. You can hear more of the lower end of the kick. You can hear more hi-hat. Watch as we bring the other ones up, especially this one.

You can really hear it on this one. On the floor tom. (music playing) Now once again, this is normal. This is the way it should sound. It's not going to sound as clean as you might think. Now let's go back and listen again, and what we want to do is go to a place in the song where it has a lot of tom fills already. So you center around a tom fill, and what you're trying to do is find a place where you can balance the three of them together, or the two of them, or the five of them, or however many toms you have.

We don't want them too loud, but yet we don't want them too quiet. I will bring them down just a little bit so they're more in context. There we go! Now we can hear all three of them. Pretty good level. You can hear all the cymbals. Now take notice, without even bringing up the Hi-hat channel, we can already hear the hi-hat fairly well. Sometimes this level right here is just enough for the song, but sometimes you need it a little bit louder.

Here is without it. Here is with it. It has just a little bit of definition, and that's about the right place for it. Now remember, these are only starting places, and as we bring more instruments in, we are going to tweak all of these levels. Also, as we EQ the drums, as we compress the drums, as we add effects, that's going to affect level as well, so we're going to do minute tweaks as we go along. There is one last channel; it's the Room channel.

Now in this case, there is only one room mic that was recorded. Sometimes there are two, so it's in stereo. Sometimes there's three of them, so there is left, center, and right. What the room mic does is it gives you a little ambience on the drum kit, first of all, which is pretty cool, but it also gives a little bit of glue to the sound. So let's bring it in and have a listen. Once again, just about the time we begin to here it is about enough, although I'm going to take it beyond that, so you can hear what it sounds like when there's too much. (music playing) So that's way too much room mic.

And if we solo it, you can hear it sounds pretty trashy just by itself. But without it, the drum set doesn't sound as good. Right about there is about right. Now also take notice what happens over on our master fader. Let's go again, and watch what happens on the drum fills.

You can see it's almost up at 0 dB, and this is why having a drum subgroup is so powerful, because now we can control the level; all of those 11 channels can be controlled by this one fader. (music playing) And we can bring it down to where everything fits well in the mix. To sum it all up, your mix bus is going to get louder and louder with every drum track entrance.

Don't forget, it's best to begin your mix with the mix bus meter reading about at -10 dB or so. The sound of every drum is going to change anywhere from a little to a whole lot when a new drum or cymbal is added to the mix. This is because of the leakage that you're going to have on those tracks. Finally, each drum that enters at the same level as the current mix is going to make the master mix meter increase by about 3 dB.

Video: Building the mix from the kick