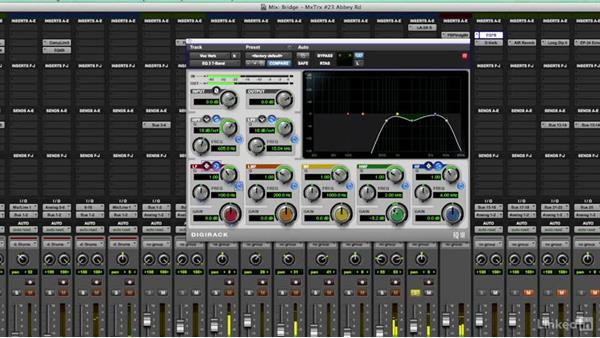 - [Voiceover] Let me show you something that I use all the time. This is a great trick, it's the Abbey Road reverb trick, and it's called Abbey Road reverb trick because this is something that Abbey Road uses on their reverbs. It's basically two filters, a high and a low pass filter, and it really makes a difference in the way the reverbs sound and the way they meld into the track. So first of all, let's listen to this vocal, just with some basic reverb on it. Now, what I'm going to put on is the deverb, which is one of the standard reverbs that comes with Pro Tools.

It's actually very good, and I use this all the time. Even though it is a native plugin, it really does sound good. So let's just have a listen to the vocal with it in. ♫ Even though you don't say much ♫ I feel like I can tell ♫ - [Voiceover] Now, there's a lot of reverb there, the vocal is swimming in reverb, or it seems like it, anyway. Let's listen in the track. (full alternative rock music) It actually doesn't sound all that bad, but we can make it sound better.

And here's how. What we're going to do is we're going to add an EQ in front of the deverb. Now, the whole secret to the Abbey Road Reverb Trick is the fact that they use these two filters. The first is a high pass filter, and I'm gonna put 12dB per octave, you can go 18, either one works, but here's a secret. You roll it off at about 600 cycles. Now, it could be, give or take, a little bit, it doesn't have to be exactly 600. But, it'll make a difference in the way it sounds.

It just melds into the track and does the thing that we really want reverb to do. It glues everything together, and yet it sounds really good. It adds that sheen onto the vocals, sounds really good. We're gonna do one other trick, and this isn't part of the Abbey Road reverb trick. This is something that you can do. I use it all the time. What we're gonna do is actually add a notch right around the vocal frequencies at 2K or so. So all I'm gonna do is I'm gonna lower this by 3 or 4 dB.

Now let's have a listen. ♫ Even though you don't say much ♫ I feel like I can tell ♫ You're just about done and you had enough ♫ Now, all of a sudden, the vocal pops out a little bit more because that reverb is not in the way. So let's listen to the track. (full-bodied alternative rock music) Listen again, and I'm gonna have it bypassed.

What happens is when we get rid of the low frequencies, none of those low frequencies that are on the original track will actually get in the way. And the same thing with the high end. Once we roll the high end off, it's gonna sound a little bit better because we're not going to hear as much as the reverb. Now, if we really want this to work a little bit better, what we can actually do is we can even lower that high end even more. So instead of 10K, I'm doing 7K. Let's have a listen. ♫ Even though you don't say much ♫ I feel like I can tell ♫ Big difference there, huh? Let's listen in track.

(full-bodied alternative rock music) Now basically, there, I never changed the send to the reverb, so the same amount is there, but we've changed the energy spectrum of the reverb. Now, you can use this, not only on reverbs, but you can use this on delay as well. And you can use it also on just about any effect you can think of, to just keep it out of the way of whatever element that you're adding. Here's a summary for the Abbey Road Reverb Trick.

The first thing to do is insert an EQ before the reverb plugin. Not after, because it does sound different. It's a little bit smoother if you insert it before the reverb plugin. Second thing is roll off the highs at 10k and the lows at 600Hz. You can use your high and low pass filters for this, but you can actually use the EQs as well. The high EQ and the low EQ. Now, just because Abbey Road always used 10k on the high end doesn't mean you have to stay there. You can actually lower this to as low as 2k if you want, for things like drums and percussion.

But whatever it is, just experiment. Anything 10k or less usually sounds pretty good. And finally, if you really want that vocal to stick out, dip a little at 2k and you'll find that the reverb is going to fit better with the vocal. Also remember that any of this can be used with other effects as well, so don't just limit it to your reverb plugin. It works really well with delays and modulation too.

5/19/2016
Get a master class in audio mixing from one of the music industry's most admired teachers, Bobby Owsinski. Built around hands-on mixing exercises designed to show you how to listen and work like a music pro, this series reveals the tips, tricks, and secrets to all the different facets of mixing, including instrument and vocal balance, panning, compression, EQ, reverb, delay, and making your mix as interesting as possible.

See how the pros handle the critical balance between the bass and drums. Learn where, when, why, and how EQ should be used on virtually any instrument. Become proficient in tailoring just the right effect for each particular mixing situation. And master the key to fat and punchy sounding mixes: compression.
Topics include: