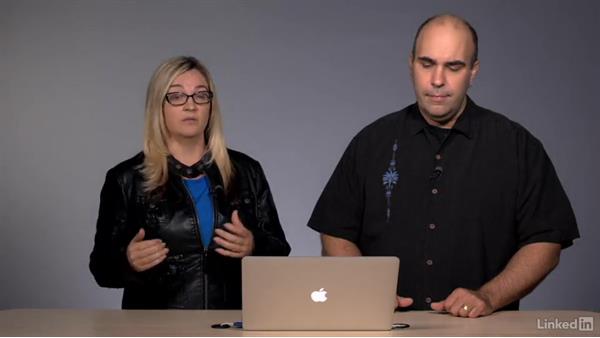 Once you have your story narrowed down, it is time to write the script for your PSA. There is a lot to say in very little time, so how do you tell your story effectively and concisely? In this movie, author Richard Harrington and producer Rachel Longman will give you some guidelines for getting the visuals down on paper.

- We've narrowed it down to a single treatment.…We have a pretty good idea of what they want.…We've captured all of their ideas during the kickoff call.…And it's now time to turn to a script.…For me, as the executive producer and a director,…I like to get out of the way.…Now, many places will hire separate scriptwriters.…Because we're a full-service visual communications company,…we often do the scriptwriting ourselves, but there are…plenty of times to work with an outside scriptwriter.…Because we're so tight in the process,…and I hire folks here who are multi-talented,…I usually turn it over to the producer…to guide that process, and he or she can take…the first stab at the script themselves, or hire it out.…

You often take your first approach, right?…- I do, because I'm the one that's been one-on-one…with the client the most, so I,…I know what they're looking for.…I know at this point from the treatment process,…and all their feedback,…kind of the road that we're going to travel.…So I always try to take the first stab.…