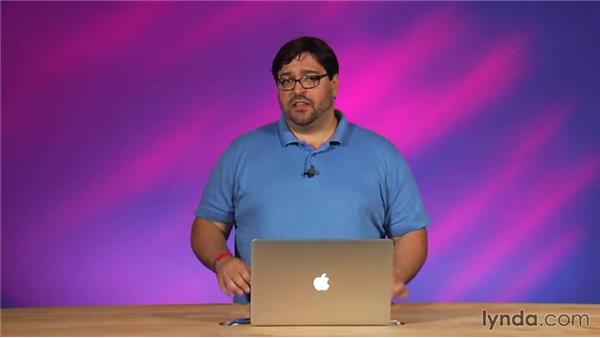 If you're a premium member of the lynda.com online training library, then you have access to the exercise files used in this title. After downloading and unzipping the exercise files, you'll be presented with a folder called exercise files. This guy right here. And you store this folder in a location of your choosing. For this title, I'm going to keep it right here on my desktop. Inside of this folder, you'll find a few things. First, is this Premiere Pro project file. We'll be using this file throughout this title, and I'll open that up in just a moment.

You'll also find a folder called Media right here. And this folder contains all of the media used in this title. And all of this media is referenced in the Premiere Pro project that we'll be using. Now, it's important you note that most of this media is in the Apple ProRes codec. ProRes and its variants, like ProRes HQ, or ProRes four by four are excellent for finishing. However, to be able to play back this media, it's a good idea that you have the latest version of QuickTime and the Apple ProRres decoder installed on your Mac or PC.

Now, in this title, we're really only going to be reading ProRes, towards the end of the title, I'll also export a file to Apple ProRes. But if you're on a windows machine, I'll give you some alternatives to writing a ProRes file. All of this media is part of a promo piece that we'll be working on for the national foundation for credit counseling. Additionally, there are a few places where we won't use media related to this promo. But I'll be sure to point those out when we get to them. Keep in mind, we won't touch every shot in this promo.

And in many of the movies that are more workflow based, we won't mess with any given shot. But I did give you the entire piece, so you can practice the techniques and the workflows that you learned throughout this title on an actual project. Let's go ahead and open up this Premiere Pro project. And when you open it up, if you leave it in the default location of exercise files and next to the media folder, everything should relink. If for some reason, you do not store the project file in the same location as the media folder, you will need to relink, but I'll show you that in just one second.

So let me go ahead and double-click on this file to open it up and Premiere Pro will launch. Now, depending on your configuration, you may get a warning message that says the last time this project was saved it was using the mercury playback engine with GPU acceleration. Simply click OK. The system that it prepared the exercise files on, was using a qualified graphics card for GPU acceleration. On your own system, if available, you can configure this acceleration in your project settings.

Now the reason this happens is because Premiere Pro uses absolute file paths when I save the project on my computer and if you somehow alter those file paths or store things in different locations, you'll get this dialog and you need to relink media. But it's easy to do. So what I'm going to do on this dialog is make sure that this option right here, for relink others automatically is checked. And that will allow me to first choose one file and then have Premiere Pro relink everything else. So I'm going to go down here and click on the Locate button. And then what I'm going to do is navigate out to my Desktop right here, and then to the Exercise Files folder and then to Media.

Now, if you have this button right here check for display only exact name matches. Premier Pro will show you the exact file it's looking for. In this case, it was looking for this file called Slate Countdown 23.988 EP. Now, to actually get this file to relink, this is a really important step. You must make sure you actually select the file itself. If you don't actually select the file itself and just simply go to that directory, you'll probably get an error message. So I'm going to go ahead and select that file and then click OK.

And in just a second, Premiere Pro will relink all of the files that are used in this project. Okay. So now that we have this project opened up again, I want to show you one last thing. Here in the project panel, we have two folders. One called Media and one called Sequences. The Media folder contains all the same media we saw on the OS level. And then inside the Sequences folder, you'll find the sequence that corresponds to the chapter and then the number of the movie inside of that chapter. So, for example, if I go to chapter two.

I have 0201 render quality, and that corresponds to chapter two in the first movie in chapter two. If you're not a Premium member of lynda.com online training library, you can still follow along in this title by using your own media. Okay. So that's it for getting situated in this title. Let's go ahead and jump in and get started with Premiere Pro guru visual finishing.