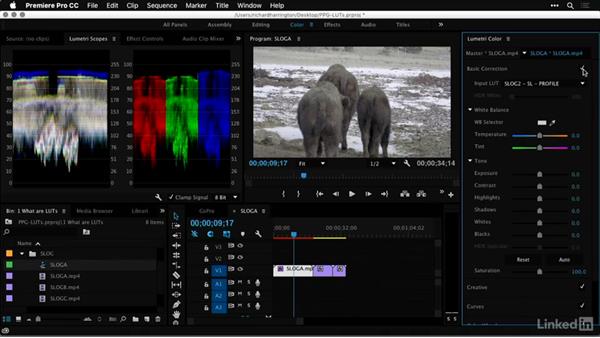 Today, many cameras shoot in proprietary LOG modes when shooting video. How do you take that footage to a base level so you and others know how it truly looks? In this movie, author Richard Harrington walks you through how to apply a camera Lookup Table (LUT) to get it to a starting point before you color the footage in Adobe Premiere Pro.

- In the last example I showed you one instance of using a camera look up table to pull things back to sort of a starting point. And let me show you a few additional options here. In your folder you'll see that there is an SLOG format. In this case we have a handful of shots from Sony's SLOG file format. Let's select those three shots, make this a little bit bigger, and I'll drag them on the new item to create a sequence.

In this case you're seeing some outdoor shots shot at two different times. These two were back to back and in this case we have a desert shot. But what I wanna do is take advantage of correcting these a bit. Under the Basic Correction section you'll see the Input LUT. And let's switch here and bring up our Scope, so it's a little easier to see. And what you'll notice is that the information has really been pulled down and is primarily staying between 20 and 90 or 95 on the scale here.

Let's go ahead and take a look at a second Scope side by side, we'll take a look at the RGB Parade. And again, you'll notice that the information has been mostly kept in place. What's different here though is my white balance is clearly off a little bit. You'll notice that the blue is spiking up, both over here, you can see that spike above 100, and on the RGB Parade. Well, that's probably because I didn't have a proper white balance. We were shooting with a run and gun situation from a moving vehicle.

And it was an overcast day with mixed lighting. I shot with a preset for cloudy, but it wasn't exactly right. Well, let's apply an Input LUT. From the popup here you'll see that we have SLOG, both SLOG2 and SLOG3. This is an important distinction. Different manufactures will often have different log formats. In this case SLOG is referring to Sony's log format. Because I shot this on an A7R mark two I know that I shot it with SLOG2.

However, if I was using the newer A7S mark two or one of Sony's higher end recent Cinema cameras I might have had the option of using SLOG3. Herein it's important that you realize that you and the director of photography need to have a conversation, or the producer or the director on the shoot needs to make sure that notes come back to the editing suite. Simply telling you that it was shot in SLOG doesn't tell you if it was SLOG2 or three. Let's try two in this case. By choosing SLOG2 you'll see that the footage is shifted and that the Scopes updated.

Now there's still a need to correct the footage, but what happened there is we saw a shift in the actual material. You'll see that it remapped the Shadows and the Highlights to better values. We still have a bit of a white balance issue however, so in this case using the eyedropper I can select something that was white and attempt to fix it, or play with my Temperature slider to try to balance things out here. In this case getting it so that the blues come in line with the other channels.

And a small change there is playing with the balance between the blues and the reds, there we go, and it was a small change, but now the blue channel is more in check with the other two. You'll note that it's still not a completely processed shot. There's room here to take advantage of other things, such as recovering the Shadows a little bit to darken them, pulling down the Blacks to make them richer, maybe recovering the Highlights a little bit, or playing with the overall Exposure.

And you'll see that we have a lot of flexibility as we work with the signal here. Now it's still possible to over-expose, so as you make changes keep it pretty subtle. In this case I wanted to expand the Highlights so the snow was nice and bright, but still have rich Blacks. In this case too a little bit more Saturation is gonna round that shot out. It was a pretty bleak winter scene, but if we put those two side by side you'll see that the contrast has come through.

Now as we take a look here, let's jump to the third shot. In this case this was also shot with SLOG. Applying the SLOG2 profile is gonna bring out more details in that clip. If we put those side by side you'll see that some additional content comes through. So let's load that on and you can see that it brings some of that back. Now as we make adjustments here there's still flexibility. Let's take a look at the Scopes and balance out our overall changes.

And I'll recover the Highlights a little bit more, so that the sky doesn't blow out. And put a little bit of richness into the black point for crisp Shadows. There we go. Now if we toggle that on and off you'll notice that the combination of using the look up table plus making some basic adjustments has given us a lot of flexibility to fully expand the signal and take advantage of the full dynamic range.

Using an Input LUT here we simply made some basic corrections to the clip and switched from a log space to a more traditional video space. Later we'll explore some additional SLOG formats from both Sony and third parties that are worth considering. In all cases you'll find that there's a collection of Input LUTs available from Adobe for many popular camera formats, but it's always a good idea to also check in with the camera manufactures to see what their recommendations are and to consider using their official profiles as well.

8/19/2016
Lookup tables (LUTs) and look files provide precise formulas for color correction. You can recover details, shadows, and highlights and match specific color spaces, and easily share settings with colleagues. So how do LUTs and looks complement your workflow? In this course, author Richard Harrington walks you through what LUTs and looks are, how they save time, how they make collaboration with others easier, and how to use them in Adobe Premiere Pro. Learn how to apply corrective and creative color corrections, build your own custom LUTs, and share LUTs between other Creative Cloud applications and third-party software. Rich also shows how to manage LUTs in Premiere Pro and exchange LUTs with After Effects.
Topics include: