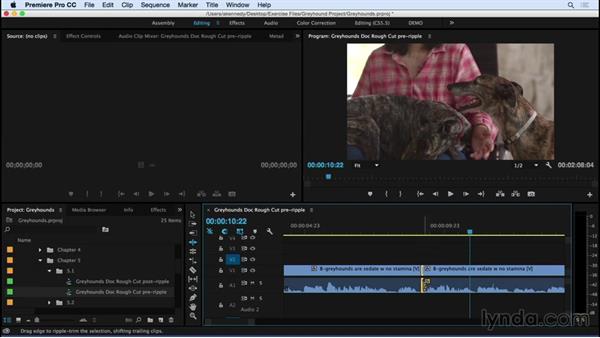 - In the previous chapter, I promised you that we would be getting to some more advanced trimming techniques, and the time for that is now. Specifically in this movie, we're gonna start with looking at Ripple Trims to adjust the length of our clips and to control where our clips begin and end. Okay? So, I am at a slightly different place in editing my sequence. And it actually speaks to a slightly different editing workflow. In the previous chapters, I was pretty careful about marking my in and out points and was pretty meticulous about sub-clipping to get exactly what I needed down to the timeline.

Here, I've got an excerpt of the same clips edited into the timeline, minus my music and B-roll, but I've been a lot rougher in laying everything down. I've got basically everything I need, but I've got some dead space and some up-cut dialogue that I need to fix. So let me just play over this first section so you can see what I mean. So let me zoom in here, ++. And I'll just play from here forward. - And they really aren't because they do spend so much time sedate. (distorted audio) For the most part, that's what they do. They have no stamina.

They are very, very short-distance sprinters. Average race is about 30 seconds. - I would pick up the leash, and he would look at me from the sofa as if to say, "Have a good time. "Let me know when you're home. "Oh, don't wake me if I'm napping." - Alright, so pretty rough, but that's okay, that's what trimming is for. As long as you get the meat of what everyone is saying into the timeline, you can come back and adjust these transitions. So let's come to this first one. And I'll zoom in a little bit more. And it looks like we need Barbara to stop speaking right about here, judging by the audio waveform.

So, I'm gonna perform this with a Standard Trim to A, show you that it is not as efficient as a Ripple Trim in this situation, and B, to show you that you are actually limited by performing this with a Standard Trim. So I'll just grab this edge without switching my tools. So I'm still in the Selection tool, and trim back, and then I can close up that gap by right-clicking and choosing Ripple Delete. So I've done it. Too many steps, in my opinion. And I just performed what is called a Reductive Trim, which means that I reduced the amount of frames.

I took away frames. Let me undo that, Command+Z. One thing I cannot do with a Standard Trim is an Additive Trim. So if I actually needed to add frames to the end of this shot, notice that if I drag to the right, I can't do that. It says my "Trim is blocked on Video 1." Alright, so just keep that in mind, because a Ripple Trim will let you do both Reductive and Additive Trims. Alright, so instead of the doing the Standard Trim tool, I'm going to switch to the Ripple Edit tool which is this button over here, or the B key on the keyboard.

So I'm just gonna press "B", and drag, and I've got it. And while I've still got the tool enabled, I will just show you that I can also perform an Additive Trim. So either is every easy. Now I'm gonna come over to the B-side of the edit because I do believe we need to perform an Additive Trim here. We need to add frames to the left here so that we can hear everything that Barbara says. I'm just gonna play over this. - Sedate, so for the most part, that's what they do. - Alright, so we need to make sure that she says, "So for the most part, that's what they do." Instead of dragging blindly to the left, what I'm gonna do is just select this edit and then use the keyboard.

And to trim one frame to the left or the right, that's my Option+Left Arrow, or my Option+Right Arrow. Or on a PC, it's Control+Left or Right Arrow. So I've got that selected and I'm gonna press Option+Left Arrow until I see that audio waveform bottom out there. And let's give it a play. (audio clip plays) And I think I have one little blip in there, so let's get rid of that. I'll just press Option+Right Arrow, and there we go. By the way, to use your keyboard to trim five frames at a time to the left or the right, just add Shift to that.

So Shift+Option+Left or Right Arrow, Control+Left or Right Arrow on a PC. And I'll give that one more play. (audio clip playing) Alright, great. So we've performed a Reductive Trim here on the A-side. We've performed an Additive Trim here on the B-side and things are sounding good. Let's go down to my next edit here. I'm gonna play over it to see what sort of problems exist here. (audio clip plays) Alright, so very similar. We actually need Barbara to stop speaking right here and we need to let this edit out a litle bit.

We need to make sure that Rebecca can start what she's saying a little bit earlier. Alright, so this time, instead of switching over to my Ripple tool, which actually I'm still in so I'm gonna switch back to my Selection tool V here. Instead of switching over to that Ripple tool, I'm instead going to just use a modifier key to temporarily perform a Ripple edit. So right now, I've just got my Standard edit, but if I hold down Command or Control on a PC, I can drag, and I perform my Ripple edit that you can see that I have still got my Selection tool enabled.

So a really nice way to temporarily enable that. And I'll come over to my B-side, and Command, click, and drag to the left, and I think we've got it. I'll play over it. (audio plays) Alright. Perfect. And I can keep on going down the line. Pretty much all of these are in need of some sort of Ripple edit, so you can continue practicing if you like. Now, I do wanna mention some limitations when you have your sync locks enabled. And these are my sync locks right here. So by default in Premiere Pro, we have sync locks enabled, and I wanna talk about what that means.

Lemme come downstream and take a look at this B-roll here. I'm gonna zoom in. And let's say that I would like to perform a Ripple edit here on this shot. So I can either switch over to my Ripple Edit tool, or I can just Command, drag and that'll temporarily enable my Ripple Edit tool. If I drag to the left to perform a Reductive Ripple Trim, notice that I can't. It says my trim is blocked. And again, that is because my sync locks are on. Now if I turn my sync locks off, so I'll go ahead and disable them for V2, V1, and A1.

I can do this, so again I'll Command, drag to the left, but see if you can notice why this might be a problem. I'll release. And now all of the B-roll downstream, rippled in, and this is most likely going to result in my B-roll being out of sync with where I put it above my interviews. So let me undo that, Command+Z. So in this case, you actually would probably wanna use your basic Trim tool, by trimming back and then just filling in the gap like so.

Most of the time your Ripple Edit tool is gonna be far more efficient, but when you have things in sync downstream, you may need to take that into consideration. I'll undo that and I'll put my sync locks back on 'cause most of the time they are quite useful, but just be aware of when you might need to turn those off. Alright, so bottom line. Sometimes ripple edits work great and allow you to cut down on keystrokes. And sometimes, they don't make sense because you need to keep the visuals of your sequence in sync. But as you continue editing, you'll get a sense of when to use Ripple and when not to, and most of the time you'll find it's very efficient.

6/23/2015
New to Premiere Pro? Start here and learn how to professionally edit video using techniques from the experts. Ashley Kennedy first introduces a fast-track approach that breaks down the entire import-to-output process into eight quick steps—ideal as an overview for new editors, and a good crash course for editors migrating from other platforms. Then she transitions to an expanded workflow, showing how to import media, create a basic rough edit, refine the cut, and introduce music, sound effects, transitions, visual effects, and titles. Along the way, she demonstrates how Premiere Pro integrates with other Creative Cloud applications, and offers keyboard shortcuts and other workflow-enhancing tricks to help you become more efficient in Premiere Pro. The course wraps up with tutorials on color correction, multicam editing, and the export process.
Topics include:

A: We added 4 movies covering the fall 2015 updates to After Effects CC, including the new start screen, touch and gesture controls, drop zones, and Adobe Stock libraries.

A: We added two new tutorials to cover the June 2016 update to Premiere Pro CC.