Stripping out the unnecessary 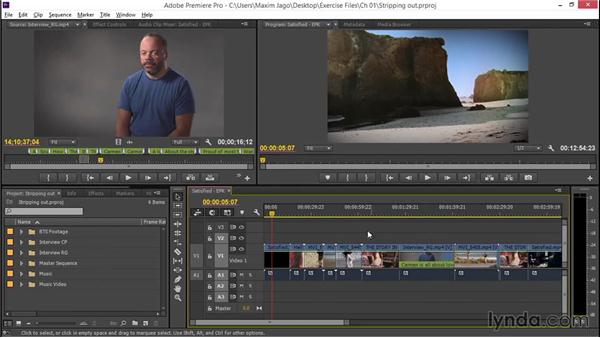 Join Maxim Jago for an in-depth discussion in this video Stripping out the unnecessary, part of EPK Editing: 2 Creative Editing and Fine-Tuning.

Once you have created your assembly edit, you're going to have a much longer timeline than you ultimately should be expecting to produce. For myself, I find that my assembly edits are usually three or four times the finished duration. In fact, once I've got my assembly edit, I find it a pretty good guide for how long the finished program will be, even if I don't know at the beginning. So here, for example, I've picked out some shots, and I've got a lot of different media all combined.

And if I just scroll over to the end of the sequence, just plant my mouse over on the last shot, I can see I'm on 12 minutes 54 seconds. This genuinely tells me that although I haven't begun the editing process properly yet, I'm probably going to end up with about a three or four minute finished video. And that's pretty useful to know, because that ratio of about three or four to one means I've got a pretty good idea about whether I've picked out enough content or not. Or whether I need to go hunting through my media or start throwing things away on the timeline.

Now, when you're picking out shots, I'm just going to zoom out a little bit here, you are probably going to want to put in addition media that you don't need. And by that, I mean things like the director saying action and cut, and the actor waiting to say their lines. Or if it's documentary media, and you're waiting for somebody to come out of a building, you'll have all of that additional content on the timeline. Now, a lot of editors prefer to very, very precisely mark up their source material within an out marks. And clip by clip, shot by shot, work their way through building the sequence.

Personally, I think this is a terrible mistake, because you could be working your way through very carefully setting up your timing for your shots. And then commonly, you'll get half way, maybe two thirds of the way through your timeline and you discover that the content you have forces you to dramatically restructure the program. For me, I think the best way to edit is to treat editing a little bit like sanding wood. You start with your grade 40 paper, very rough. And you go right the way through from beginning to end and then you do the same thing again with a finer paper, and a finer, and a finer, and a finer.

So the trick is to work your way right through the content, and as you do so, you're building up an awareness of the overall structure of your program. Now, before you can meaningfully do that, you're going to need to strip away the really obviously unnecessary stuff as I said. And there were just two keyboard shortcuts to remember that will make this process very, very easy. Now, here on my timeline, I've got one long stretch of clips. Notice, I am just using one video layer. Some editors like to put alternate takes on separate video tracks and that, that's fine if that's your preference.

Personally, I tend to put them one after another after another. And I'll scan backwards and forwards as I am working on the timeline to see if I've got duplicate takes. But again, I recommend being very loose, very wide with your in and out marks when you're setting up your media, so that you can very quickly build the structure, and we're going to remove it quickly now using these keyboard shortcuts. So to take an example, here, I've got some media at the start of the timeline. And I know, looking at this, that my next shot is this one.

We're going straight into Carmen Perez saying hello and then we're back to the beach, and the beach and the beach. I don't really need this additional shot on the end. I'm just going to zoom in a little bit with a plus sign at the top of the keyboard here. I'm going to be kind of rough with this. Remember, you can always trim later and you don't need to worry too much about precision. So, I'm just going to press w. And now, I've just trimmed off the end of the shot. And here we can see right away in the next clip, we've got the clapper board. Let's just have a look at this. I'm going to press play.

>> Now I actually kind of like that. I like the way that we get the introduction. But it's a little bit long in the beginning and I'm probably going to remove the clapper board. So, again, I'm just going to scrub beyond the board. And now I'm going to press q. And in this case, it's going to trim off the beginning of the shot. You can see that happening on my timeline. So, the trick here is not to do anything like careful adjustments. We're going to do that later. We're going to worry about trimming, timing much later in the process. All we need to do is jump from the beginning to the end.

And just remove content that we know for sure we're not going to include. Now here, somebody walks past. I don't know if I want that or not. But lets get rid of part of it. W. And now, I'm dragging along and now let's scrub through. At this stage, I can't tell if I need all of that shot or not. So adjusting that a little bit. Move on to the next one. Fine. The next one. Fine. So, not every shot is going to need content removed.

Let's have a look here. >> So there we've got a gap at the beginning. >> The music. >> Yeah >> So she's thinking about the answer to give. Just on the pause there, let's hit q and get rid of the gap. The idea here is to remove the fluff, to remove the stuff that you know you don't need, so that when we're later working on the structure of the program, as we begin to play the shots, we're not distracted by that unnecessary content. This is also the time, if you do have multiple takes on the timeline, to remove them.

And it shouldn't take too long. But once you've gone through your media, you're ready to look a little bit more closely at the structure of your sequence 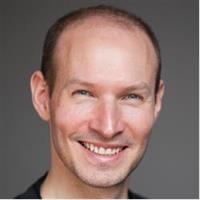 9/15/2014
It can be difficult to achieve a rich look and feel for electronic press kits, or EPKs, given the fast turnaround they usually demand. But using the creative editing and fine-tuning techniques shown in this course, you can achieve "picture lock" at an early stage in the process.

In the previous installment of EPK Editing Workflows, Maxim Jago showed you how to ingest media and build a basic assembly edit from your favorite shots. Here you'll take that rough cut and fine-tune it using a number of industry-standard trimming techniques that work in just about every nonlinear editing system. You'll learn how to take your edited sequence from an assembly to a precise cut, with temporary effects and transitions that will help you nail down the final visual look of your video.
Topics include:

Video: Stripping out the unnecessary