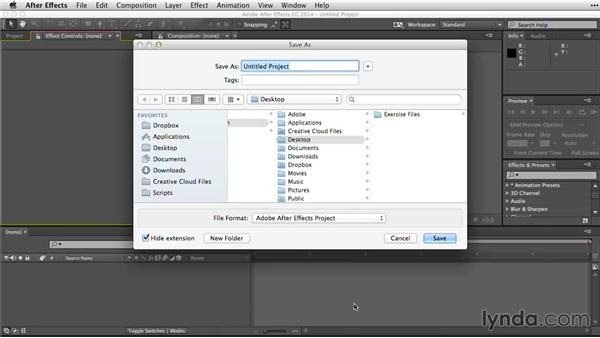 One of my biggest pet peeves when it comes to finishing a project is speed changes that just don't look really good. Now speed changes, of course, are used all the time in every type of project. Maybe you're going for dramatic effect. Maybe you're trying to do a fit to fill, to fill a certain amount of time. Whatever the case is, speed changes are something that are used all the time, but getting them done properly and making them look their best can sometimes be a challenge. So here on our project, I had this sequence open called 0105 speed changes.

And it's this shot of one of the main characters in the promo walking into his house after a long day of work. And I kind of want to make it a little more dramatic. I want to slow it down. So it kind of has a slow walk into the house before he shares some bad news with his wife about their house getting foreclosed on. So here's what I'm going to do. I'm going to select the shot. And then I'm going to press Cmd or Ctrl+r, if you're on a PC, to open up my Clip Speed / Duration dialog. And in this box I can of course adjust the clip speed. Now, by default the speed and the duration are linked together.

So let's go ahead and make this shot, I don't know, 40%. And you'll notice that the duration changes. So I'll go ahead and click OK. And the shot, of course, gets longer. Let's go ahead and play this back and I'll make the program monitor a little bigger here. Okay, it looks a little chunky. You can see that, it's kind of stuttering in there. But that, of course, could be because I haven't rendered the shot. So, I'm going to go ahead and come up to my Sequence Menu and say, hey you know what, let's Render In to Out. I am working on my laptop. On most systems, of course, this should be totally real time, this type of speed change.

But, even if I rendered it, let me go ahead and make this a little bigger, we'll play it back once again. Now, there's just something not so smooth about that. I don't know. It kind of bothers me. And I would feel terrible to let this project and this shot out the door with that kind of herky jerky kind of speed change. Now, there are a lot of things that we can do inside of Premiere, when it comes to adjusting speed changes. Let me go ahead and get back out this. And I'll undo that speed change and I'll select the shot again and press Cmd+r or Ctrl+r to open that dialog box back up.

Now if I didn't want to change the overall length of the shot, I can simply click on this little sort of wink icon right here. And now my speed and my duration are going to be separated. This allows me to do sort of a variable speed change. So I'm going to go ahead and say, let's make this 40% again. And you'll notice that the duration does not change. It remains the exact same. I'll go ahead and click OK. Let's go ahead and play that. Same problem. Now, I could of course, select the shot, come up to my effects controls, and then down to time remapping here. And open up my speed category, and I can do some key framing and some adjustments there.

But, I find this to sometimes to be a gigantic waste of time. Getting perfectly smooth speed changes on some shots in Premiere Pro can be really challenging. That's why when I have really difficult shots, like this one, which doesn't on its surface seem like it should be difficult, it's just having a problem. I go over to After Effects and use the Timewarp effect. So here on my timeline, I'm going to undo our speed chains there to get back to the original speed and let's just double-check that. Yep, that is 100% and what I'm going to do is right click on the shot and scroll down here in the architectural menu and choose replace with After Effects Composition.

Okay, so I'll go ahead and click Save. So here we are in After Effects, and you can see that I have that exact same shot. Now to sort of adjust the speed on the shot, I'm going to use an effect in After Effects called the Timewarp effect. So I'm going to make sure that my shot is selected here. And then I'm going to come up to the effect menu, and then I'm going to come down to time, and then choose Timewarp. Now, when the time warp effect gets added to the shot, let me go ahead and make my effects control panel here a little bigger, you can see that there are a lot of options.

I could probably spend four, five, maybe even six movies telling you about all the options here and the extreme amount of control that you have when it comes to adjusting the speed of a shot here in After Effects. But I'm not going to do that, I'm going to show you some of the essentials here and then on your own you can play around with getting some of the better looks. So, the first thing I want to do up here is adjust my method of sort of doing this time warping, this time remapping. Now, whole frames is an option that I don't choose very often. Whole frames will actually just display the previous provided frame.

And it kind of gives you a more stuttery kind of looking effect. Not what we're going for here. I could do a frame mix which is essentially what Premier Pro is doing. Sort of frame blending. When you do a slow down of a shot. Or I could choose pixel motion. And pixel motion is where it's at. Pixel motion adjusts on a pixel by pixel basis to create motion vectors. And really what that means is that you're going to get the best and smoothest slow motion or sort of speed change that you can possibly get. So I'm going to make sure I choose Pixel Motion, here.

Then I can adjust the speed. Let's make this just for comparative sake exactly the same. I'll make it 40%. Now down here, under Vector Detail and then Smoothing, I can adjust some of these parameters to get sort of the most smoothness out of the shot. Vector detail, I tend to leave on its default. If you have something with very fast motion in it that you're then trying to slow down, you can adjust vector detail. And then these global smoothness controls, again, try to leave them on the default to start with to see what kind of results I get, but I think I'm going to leave everything kind of here on its default.

And I'm simply going to press Save, right, and then switch back over to Premiere Pro. There we are. And there's my shot. And just so we see this in it's full quality I'm going to come up to the Sequence menu and say Render In to Out. And this will just take a second to go ahead and render. It's a pretty short clip so we'll give it just the time that it needs. And when I play this back, you're going to be astounded by the smoothness of the speed change compared to what we did previously inside of Premier Pro. So we'll let it finish up here, about 65%, it will be done in just one second, here we go.

Let's go ahead and make this bigger, again, and I'll go back to the beginning and play that back. That's way better than what we got in Premier Pro before, that sort of herky, jerky kind of motion that we had just by slowing down the shot in Premier. Has been replaced with a nice, smooth, slow motion. Now, of course, you could go back over to After Effects, adjust some of those vector controls, the smoothest properties, as well as the other plethora of controls that you have there on the Timewarp effect, but I think you can see pretty much by default.