Sketching the visuals with style frames 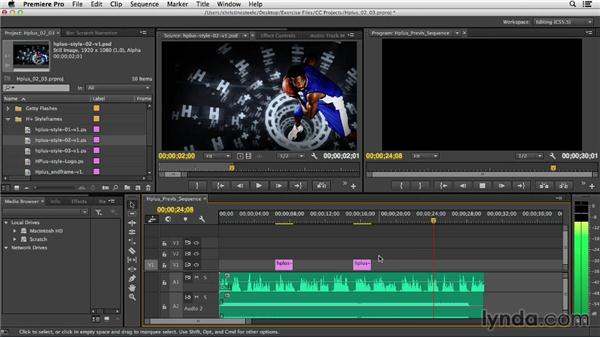 Join Christine Steele for an in-depth discussion in this video Sketching the visuals with style frames, part of Premiere Pro: Commercial Editing Techniques.

Christine: With the audio bed in place and set to a 30 second duration, I'm now ready to place the visuals. The style frames indicate that there's going to be motion graphics and lighting effects created for each of the featured athletes. I like to call these hero shots. I'm going to place these three hero shots in specific locations in the timeline. And what I like to do is use both the music and the narration cues to guide where I drop those h plus sport style frames. And this allows me to sketch out the timing of where the hero shots are going to go in my sequence.

I'm going to play through the audio bed and describe for you how I decide where to place these hero shots. Male: You work hard and play harder. Water can't give you back what you lose. H Plus has what you need (MUSIC). listened to that driving beat of the music and I started visually imagining a montage that sort of builds to a hero shot and I'm deciding where to place this first hero shot.

And what I've decided is that the first time I hear the narrator say h plus is a great place to drop that because we really want to identify an image or a look with this brand and this hero shot is going to have some beautiful lighting and motion graphic effects. So that's a great way to emphasize the brand. I'll select a two second duration for the clip. And again I'm randomly choosing about two seconds but I know because this is only a 30 second spot I don't have a lot of time to work with and most of the cuts are going to be pretty quick.

So I'm going to grab that shot and just drop it here in the timeline. Now notice how I've opened up the A1 audio track so you can see. The visual wave form represented for the narration and I'm pressing S to unlock snapping so I can drop this clip exactly where he says H plus sport which is this wave form here. Male: H plus has what you need. Natural electrolytes from plants not chemicals. (MUSIC) H Plus isn't made in a lab. Too much sugar.

Christine: Okay. I stopped again where I heard a change in the music. And notice how that change in the music happens almost at the halfway point. It's a thirty second spot. This is 16 seconds. And right in this area here. Although this is the narration we're looking at this is about where I noticed a change in the music. That's a great place for another hero shot. I'm going to go over and grab hero shot number two. Now I don't really know that the client intended me to put these in this order 1, 2, 3 but it's a fairly safe thing to assume since they named that 1, 2, 3 that, that's what they're imagining.

And that can change later on. So again, I'll choose two seconds of the second hero shot, and I'll drop this in the place where I heard the music change occur at the halfway point in my sequence. Backing up and playing through it. Male: (MUSIC) And robs your energy when you need it most. Christine: Okay. So I like that. That little change in the music right here brings us into another hero shot. Now I'll play forward and listen again.

And find another place to put the third hero shot. Male: (MUSIC) Christine: Now I'm tempted to place this third hero shot where we've got the tagline, everything you need, nothing you don't. But the product shot which was called the end frame is probably going to end up here at the very end. I don't know if I want to use the final hero shot leading into the product shot. But right in here at this point. The narrator says H plus again.

So it's another opportunity for me to emphasize the brand. Right here. Male: (MUSIC) Christine: And it nicely breaks up, again, from the position in the sequence where I have a hero shot, to the end where I'm going to have a product shot. It's about the halfway point, again. So I'll choose the third style frame. Soccer player. Select a two-second duration, and drop this in where I see the audio waveform said H plus again. Male: H plus only has five grams, everything you need, nothing you don't.

H plus, natural re-hydration. You work. Christine: Okay, here at the end is where I want to place that end frame, the product shot. So at this point I don't really care what the duration is I'm just going to drop it in and snap it to the end of the sequence and then I'll just trim back so that it completely covers the final phrase, H plus. Male: (MUSIC) Christine: Now, I love that the designer gave me three style frames, three unique, hero shots, because it follows something I like to use in every edit, which I refer to as the rule of threes.

Many artists use this, and there's a lot of different ways to explain it. But essentially if I'm going to use effects shots, treated shots like these will have motion graphics and lighting effects placed on them. I like to use that effect at least three times. Even in a short piece like this it's only 30 seconds. It doesn't mean I won't use additional effects. Or some effects twice like at the beginning and the end I may have bookends. In other words something I use only at the start and end of the sequence but in the body of the sequence the fact that I can use or repeat the same type of effect three times.

Is really elegant and it almost always works. There's something psychologically for people about the number three. It's kind of like if you see two things like two trees there are a couple of trees. But if you have. Three or more of something people accept it as many, a grove of trees. So this way you've established a look for the piece and it's not too sparse, there's not just two effects, there's at least three. So I love that, and look at the clips in the sequence.

I'm really liking how the hero shots are quickening. What I mean by that is, as we build, we see a hero shot. But as you get towards the halfway mark, the hero shots come closer together. See how the clips are getting close together as we move towards the end of the sequence. As we approach the climax, which is the end of the spot, the product shot, I've quickened the pacing. Now, shot placement may change later on. In fact, I'm sure it will, as this is only a temp audio bed. But I've sketched out the timing, and the placement of the hero shots, and the ending product shot.

So now I have an effective guide for pacing the cut. 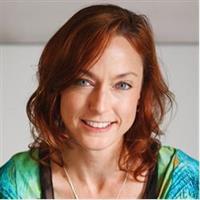