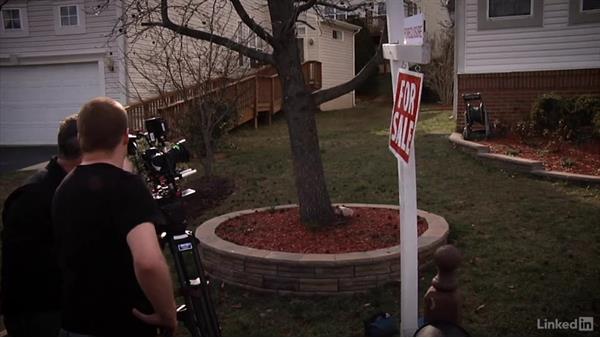 - So we're getting an extra exterior shot.…It's not actually going to be used…in the PSA itself but it will be used in the web version…and what we're doing is we're purposely…making it a very long shot so we've laid…down the track and we're going to have…a very slow dolly move so we can use…this with longer narration.…We can always cut into the shot earlier or later…but what we want to do is build a reveal…to see the foreclosure sign since it's a spot…about losing your home.…So it should work pretty well but just a couple…behind the scenes things, we've got the track laid down,…we're working with the light we have,…we actually had to manufacture the sign,…it was easier for us to build one…than it was to track one down and actually…get it delivered so we've put this whole…thing together just to really add…to the realism of the scene.…

By using metal track it was easy to build…a very long track and keep it stable.…The assistant camera operator did a lot of work…to make sure that the shims were placed…and we had to use both 2 x 4s and shims…