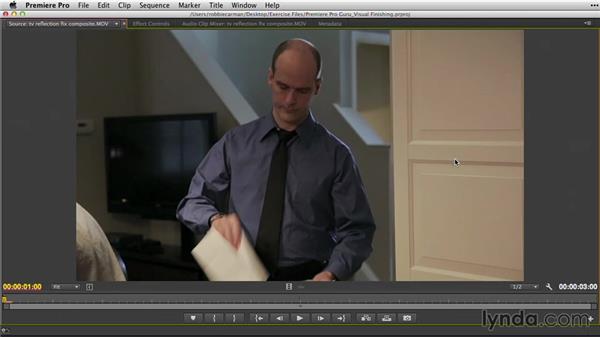 Now, in a lot of projects there's going to be another thing that you have to be aware of and that's temporary or stock shots. In a lot of long-form projects it's very common to have stock footage. And the intent of using that stock footage, at least in its initial form, is that later on you'll replace it with a high quality version of that stock shot. After you paid for it and identified, yep, that shot will work. Now in a lot of short-form work, especially promos or commercials, temporary shots are not really stock footage, at least most of the time.

Oftentimes, in short-form work, these temporary shots tend to be things like shots that you're going to replace with a visual effects shot or a shot that's getting some motion graphics work done on it. Now here in this sequence, I have a couple shots that are temporary that I want to go ahead and replace. Let me play here just for a second. And i'll stop on this shot, now you're wondering to yourself, what's wrong with the shot? Well i'm going to go ahead and select the program monitor, and then use the grav or tilde key to make the program monitor bigger. Now looking at the shot, it looks just fine. But the producer and the director have said to me, oh gosh, Rob.

This red dot, this tally light from one of the cameras, is exceptionally distracting and we want it fixed. Now while I probably could have fixed it myself, you know what I took the easy route and actually sent this over to a visual effects guy to kind of get that red dot. Out of the TV screen and make it look like a more normal reflection. So I want to go ahead and replace this shot. Now there is one more shot in the sequence that I also want to replace. Down here towards the end of the sequence, right here, go ahead and make this bigger again, I have a shot of this couple sitting around a computer screen.

Now, everything looks okay about this shot, and don't mind the graphics on there. What I want to pay attention to is the actual computer. And this is very common in promo or short form work where you have screens and you want to do a screen replacement. And in this case the website yah it's kind of blurry it doesn't look so colorful. And what I can do is send this over to a visual effects or motion graphics person. They can do the screen replacement and then get me that shot back. Okay so now that we've identified to two places that I want to fix. What we need to do is actually replace the shots and there are two main techniques that I use to do that.

First let's go back and find the shot at the top of the sequence that we want to replace. Right there. And next what I'm going to do is come over to my project panel and I'll also use the grav or til day key to make that bigger. Close my sequences bin here. Let's go over to the media bin. And if I scroll down here, I have a shot right here called tv reflection fix composite. Makes sense. It's the fix for the tv shot. So I'll go ahead and double click on that to load it up into the source monitor. Now you can see here's the shot. Let me go ahead and make this a little bigger.

And yeah, now that reflection is kind of minimized. It also looks like the visual effects or motion graphics person did some basic color correction on this. They neutralized a little bit of the sort of heavy saturated, sort of warm color cast that was going on. That's okay, but I tend to tell visual facts and motion graphics folks just fix the problem, don't do the things that I can do later on. But in this case it's totally okay. So, when I delivered this shot to the visual facts artist, I gave them just the bit that I wanted to fix, just the part that was on my timeline.

So when they returned it to me, it was perfectly timed out the part that I want to replace. So, what I'm going to do is make sure here at the very beginning I have an endpoint, which I do of course, and at the end I have an out point, and then down here on my timeline, I'm just going to do the same thing. I'm going to mark it in, and I'm going to come down to the end of the shot and mark it out. So now I have an in and an out on the sequence. And of course on my clip I have an in and an out. And if I take this and drag over, I'm going to just do a basic overwrite. And there you go. I've edited that clip into the sequence. Now if we go ahead and play this.

>> But today's economy is. >> Perfect. Really easy fix. And that's one way to quickly replace shots in your timeline. That's just basic editing. Now there's another technique on replacing shots that you might not be aware of, and it's kind of unique to Premier Pro and is so cool how it works. Let's go down here to that other shot that we wanted to replace. Right here, with the computer screen. And we've identified that this shot has a problem with the computer screen itself, and I want to replace it. But in this case, I have multiple layers and setting an in and out point, and targeting tracks, might just be, too many steps.

So there's another way that I can quickly replace shots that doesn't involve setting in and out points. Let's come back over to the project panel. Let's go ahead and find the shot that we're going to use to replace the shot on the timeline and it's this shot right here, computer screen replace. So I've got that sort of selected over here and let me scroll down a little bit here, there it is. And instead of marking in and out points, all I'm going to do is take it over to my timeline. And while I'm dragging, I'm going to hold down the option key and drag on top of the clip that I'm trying to replace. There we go, I'll let go, and whammo, it replaced that shot.

Yeah and that looks much better. It's much brighter, much more colorful and a little clearer. So, I think you can see two ways of quickly replacing temporary or stop shots on your timeline. Either just doing some basic editing by marking in and out points, or by using the very useful option and drag technique to the clip that you're trying to replace.